A new research by 'Lancet' shows India ranks 154 out of 195 countries in terms of access to healthcare, which is worse than Bangladesh, Nepal, Ghana and Liberia

Why is it that the world’s fastest growing major economy ranks below much poorer nations such as Bangladesh, Nepal, Ghana and even Liberia when it comes to healthcare for its masses? Last week, new research by medical journal Lancet, on the basis of data from the Global Burden of Disease report, 2015, said that India ranked 154 out of 195 countries in terms of access to healthcare.

Consider chart 1, which lists India and 14 other countries that have higher scores than India on the Healthcare Access and Quality Index. India has the highest per capita income of all the countries in the chart, but it ranks last on the healthcare index. 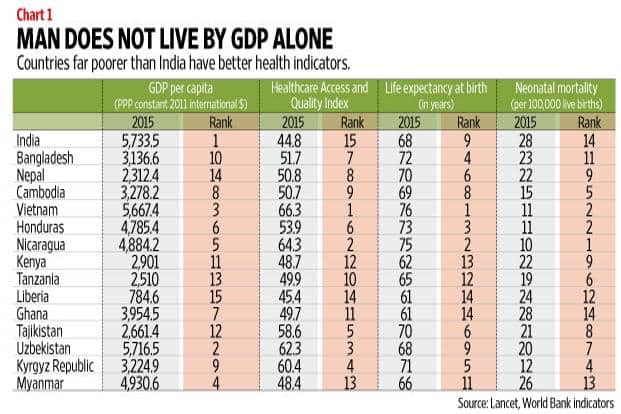 The healthcare data raises a host of questions. Why is it that communist and ex-communist countries such as Vietnam, Cambodia, Tajikistan, Uzbekistan and Kyrgyz Republic do so well on healthcare? Does the communist ideology make a difference? What accounts for Nicaragua’s superior health record—is this too a reflection of left-wing rule in that country? How does one account for Nepal and Bangladesh doing so much better than India? Why hasn’t democracy in India forced the government to be more responsive on health for the masses? And finally, is GDP or even per capita GDP truly a measure of well-being?

Chart 1 also has data for life expectancy and neonatal mortality rates for the 15 countries. Once again, Vietnam emerges at the top in life expectancy. India ranks a poor ninth. India ranks last, along with Ghana, in neonatal mortality among the 15 countries. As far as India is concerned, the data seems to suggest something is very wrong with its priorities—surely saving children’s lives should be of prime importance in any society?

We come now to Chart 2. China is now much more advanced than India—in 2015, its per capita income, in purchasing power parity (PPP) terms and in constant 2011 international dollars, was $13,572.20, compared to India’s $5,733.50. It may be argued therefore that China will have far better healthcare access indicators than India, because she is much richer. That is true and China’s score on the healthcare index in 2015 is 74.2, far ahead of India’s 44.8. But what if we take the indicators for China 20 years ago, as long back as 1995? At that time, China’s per capita income (in PPP terms in 2011 constant international dollars) was $2,564.10, less than half India’s per capita income today. But even then, China’s score on the healthcare index was 53.7, well above India’s current score. Chart 2 compares China’s health data in 1995 with India’s 2015 data. It shows that in life expectancy, neonatal mortality and maternal mortality, the China of 1995 was ahead of the India of 2015. Does a communist dictatorship care more for its people’s health than a democracy? Comparing China with India, it certainly looks like it. Or is India merely an electoral democracy, without the masses having any real say on issues that are of vital importance to them?

Chart 3 lists government expenditure on health as a percentage of total government expenditure for the 15 countries and China. Again, India puts up a poor show, coming second from the bottom. The chart clearly brings out the fact that healthcare ranks rather low in the Indian government’s list of priorities, at least compared to the importance given to it by other countries. Compared to India’s 5%, China spends 10.4% of its government budget on health. Vietnam spends 14.2% and Nicaragua a huge 24%. This chart brings out one big reason for India’s poor showing in the healthcare index. Surely, now that our GDP is growing so fast and we have become a middle-income country, the government can afford to spend more on healthcare for its own people?

Manas Chakravarty looks at trends and issues in the financial markets. Respond to this column at manas.c@livemintcom