Ahead of Budget 2016-17, lack of investment demand is a major macroeconomic concern

Advance estimates of national income for 2015-16 were released by the Central Statistics Office (CSO) on 8 February. The press note from CSO shows total gross fixed capital formation (GFCF) is expected to be ₹ 39.82 trillion, compared with ₹ 38.44 trillion for the year 2014-15.

During the last five years, the share of capital formation in manufacturing remained constant at around 18%. The share of investments in other key sectors, namely, construction, transport and storage and communication services, have also declined. Decline in investment in these critical sectors only indicates that all is not well with the economy.

Within GFCF, the only sector where there has been a sudden increase in the share of investment is ‘trade, hotels and restaurants’, which might be a reflection of credit-led growth in consumption demand.

What should be done to revive investment demand for critical sectors of the economy? The most talked-about policy stimulus seems to be relaxation of the fiscal deficit target for the year 2016-17 to increase public capital spending to crowd in private investment. This is the easiest thing to do for any government and can be done provided public capital spending leads to an automatic increase in private investment demand. 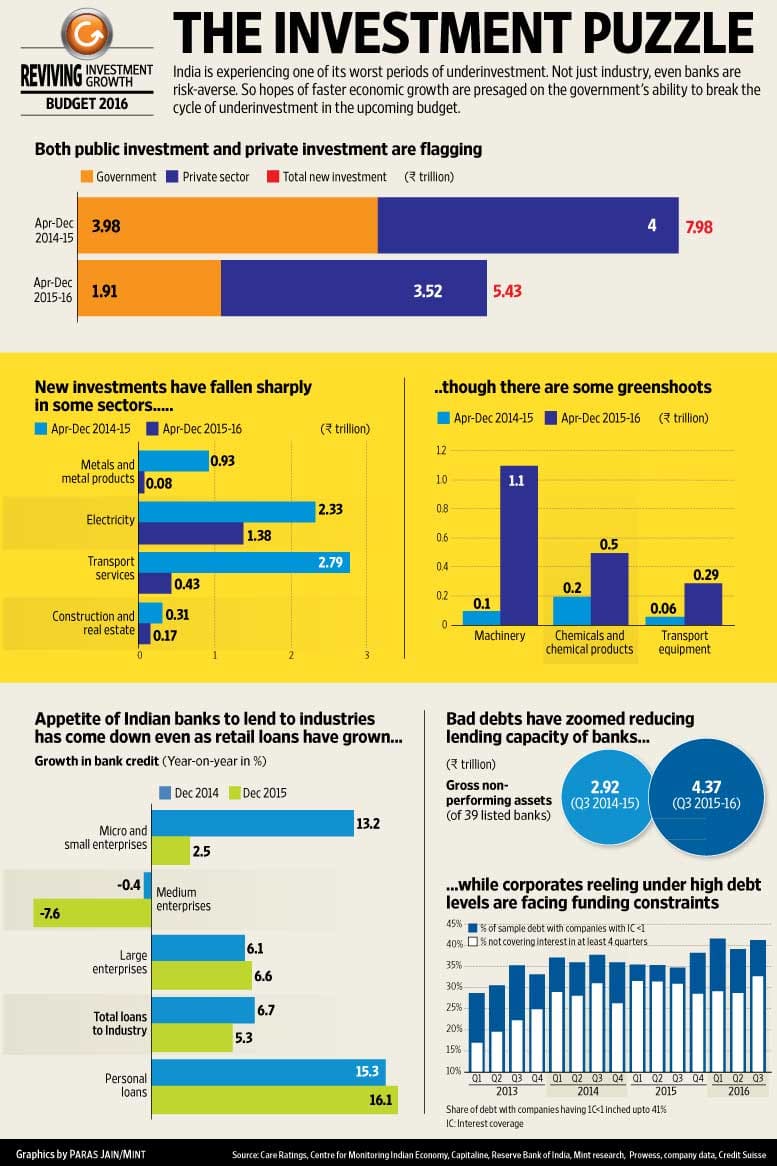 However, the link between the two is certainly not automatic. Also, the structural weakness in central government finances is the presence of a large revenue deficit. As per the medium-term fiscal plan, the revenue and fiscal deficits of the central government for the year 2016-17 are expected to be 2.4% and 3.5% of GDP. When more than 70% of the borrowed resources are to be used by the central government for financing current consumption expenditure in the year 2016-17, its downside fiscal risk cannot be ignored. Also, there is no guarantee that increase in fiscal deficit will result in an automatic increase in public capital investment in the presence of large revenue deficit.

It is true that pressure on revenue deficit might have eased due to low crude prices and consequent reduction in the subsidy bill on petroleum products. Also, indirect taxes from petroleum products due to the increase in excise duty on petroleum helped mobilize more revenues. This is good news when it comes to managing revenue deficit. However, one should not underestimate the fiscal implications of the impending award of the Seventh Central Pay Commission and One Rank One Pension (OROP) scheme. These two together would contribute roughly to an additional increase in revenue expenditure to the tune of around 0.7% of GDP. This would certainly put further pressure on revenue deficit unless this increase is adjusted in Budget 2016-17, either through contraction in non-salary expenditure or increase in revenues.

When it comes to revenue mobilization, the possibility of an equivalent increase in revenue is unlikely, given the low nominal GDP growth rate. Contraction in revenue expenditure beyond a point is not feasible as a large part of it is committed in nature. Given these, if implementation of commitments such as Seventh Pay Commission and OROP are postponed, it is only going to provide a short-term illusion of fiscal comfort to create unmanageable fiscal imbalance for the future.

Also, discussion about higher public investment leading to an increase in private investment should examine what actually has been the movement of public investment in the country. Latest National Accounts Statistics show that GFCF by the government sector has actually increased in the last few years. As a percentage of GDP, the increase is from 3.60% in 2011-12 to 4.12% in 2013-14. As per the revised estimate of 2014-15, it is estimated to be 4.17% of GDP. In other words, there has been an increase of general government GFCF to the extent of more than half a percentage point of GDP between 2011-12 and 2014-

Finally, as capital spending by the states is more than double that of the centre, how this plays out in the medium term in terms of composition, quality and effectiveness of public investment spending requires careful policy consideration. Macro fiscal management at the centre cannot ignore these developments.

To conclude, the fiscal headroom to increase capital spending to boost economic growth is much more at the state level due to prudent fiscal management by the states. To reap that benefit for the country, the centre should talk to the states.

The author is a professor at the National Institute of Public Finance and Policy, New Delhi.