How Virat Kohli beats almost every other IPL batting record

RCB's captain has scored runs at an average of over 80, which is unheard of in T20

In the first eliminator match of the Indian Premier League (IPL), against the Gujarat Lions on 24 May, Virat Kohli dived forward at long-on to pull off a stunning catch, getting rid of a dangerous-looking Eklavya Dwivedi. In a typically unconventional show of excitement that manifests itself as seething rage, he slammed the ball down towards the bowler Shane Watson.

The confused umpires, assuming that Kohli was upset because he had floored the catch, referred it to the third, while the Royal Challengers Bangalore captain could not believe he had to explain the brilliance of his performance just because of a misplaced show of expression.

There is otherwise absolutely nothing out of place for Kohli in this season’s IPL, including that gelled hair. With 919 runs scored (and a match remaining, the final on 29 May) from 15 matches, Kohli is already the highest-scoring batsman in a single season in IPL’s 9-year history. 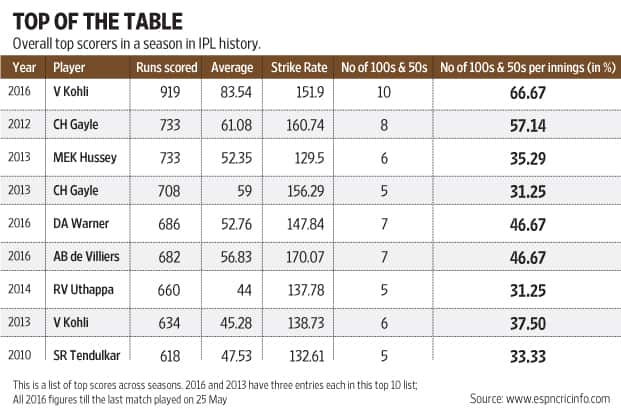 That’s not just it: He reached that figure by his 12th match of the tournament, when he overtook Mike Hussey and Chris Gayle’s identical 733 scored in 2012 and 2013, respectively. They had played 17 and 15 matches, respectively, to get to that figure.

As a bonus to Kohli’s batting performance, he also pulled off catches like the one on Tuesday and one against the Delhi Daredevils on 22 May, when he ran back about 30 metres to catch Karun Nair, making it look easier than it was. He then jumped and roared, yes, in rage.

But we digress. It’s Kohli’s batting that’s biting this May. To compare with previous performers is like pitting a Maruti Alto against a BMW Seven Series on a highway but comparison adds context. 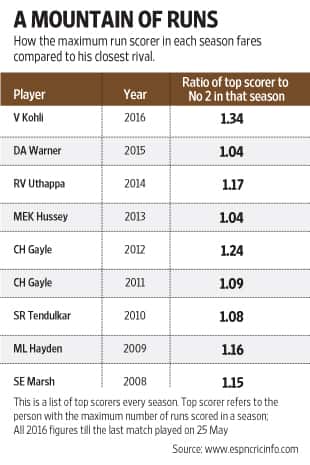 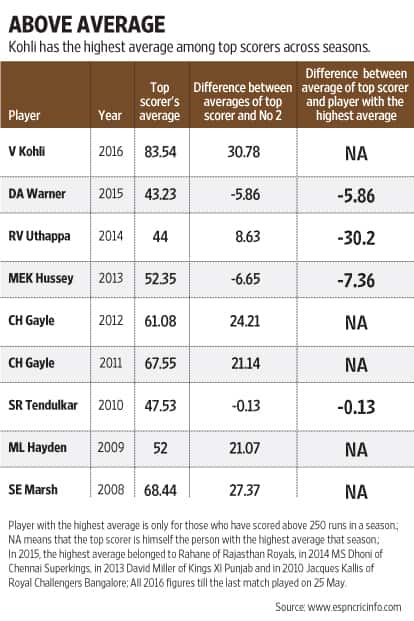 Kohli has scored over 50 runs in every two out of three innings he has played so far, bumped up by the fact that he has only two scores in single digits—including the only duck on Tuesday—in 15 innings. Gayle is the next best with 57.14% in 2012.

The Indian Test captain’s dominance has put RCB teammate A.B. de Villliers’ performance under shade, and that takes some effort (though de Villiers’ strike rate is better). The 682 runs by de Villiers, the League’s third highest scorer, have led the team to victory many times, including in the last match against Gujarat.

Kohli, with de Villiers, has accounted for 57% of the runs scored by RCB this season, the former alone netting over 30% of the total. This has, in turn, made fellow opener Gayle completely redundant in the context of the team’s scores and negated the absence of the injured Mitchell Starc and Samuel Badree, which has weakened the bowling attack. But when a team makes 248-3, like RCB did against Gujarat in a League match, for example, with both these batsmen scoring centuries, the dependency on bowlers lessens.

If at all Kohli’s performance is required to be faulted, it’s in his strike rate which, at close to 152 runs per 100 balls, is the fourth best among all nine IPL season top-scorers. It falls way short of Gayle’s 183.13 in 2011, which is small consolation for the West Indian, formerly the best T20 batsman in the world. Kohli’s run-feast even drew comparisons to Don Bradman’s 974 runs in a series against England in 1930, but the comparison is untenable given the different eras and formats. It does, however, make for an interesting debate when compared to other dominant performances across sports, from Martina Navratilova (1984) and Roger Federer (2006) in tennis to basketball’s Michael Jordan for the Chicago Bulls in 1987-88, Tiger Woods in 2000, F1’s Michael Schumacher in 2004, footballers Luis Suarez for Liverpool in 2013-14 or Lionel Messi for Barcelona in 2012, among several others.

So what remains for Kohli to achieve in the final in Bengaluru on Sunday? He needs another 81 runs to reach 1,000. He could also become the second Orange Cap holder (for most runs) to win the IPL (two players with the Purple Cap, for most wickets, have won the trophy). He could chase Gayle’s highest IPL individual innings score of 175.

And he could even try smiling after taking a catch.