What it takes to crack the civil services entrance

Years of preparation, multiple attempts and choice of subjects matter

It took Ira Singhal, this year’s Indian Administrative Services (IAS) exam topper, four years to get to that position. Singhal’s was a special case—she had earlier cracked the exam but was refused a posting because of her disability. But nearly seven out of every 10 candidates require at least three attempts before succeeding in the civil services entrance.

Abysmal success rates, years of preparation and multiple attempts by candidates past their mid-twenties studying subjects other than what they have been trained in, and the ability to get into some of the country’s best educational institutions are some of the key attributes of the IAS entrance process. Here’s what data put out by the Union Public Services Commission (UPSC) for the decade up to 2012 (the latest available numbers) tells us. 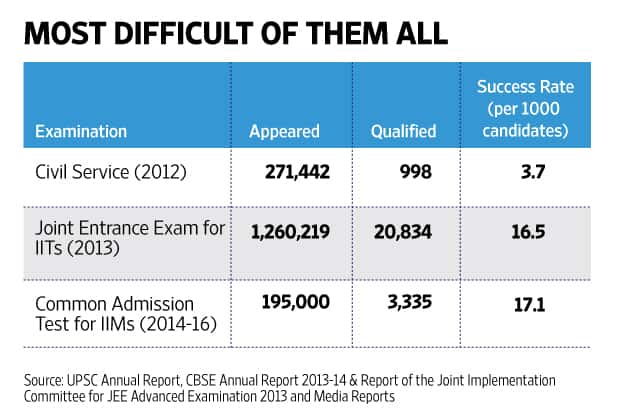 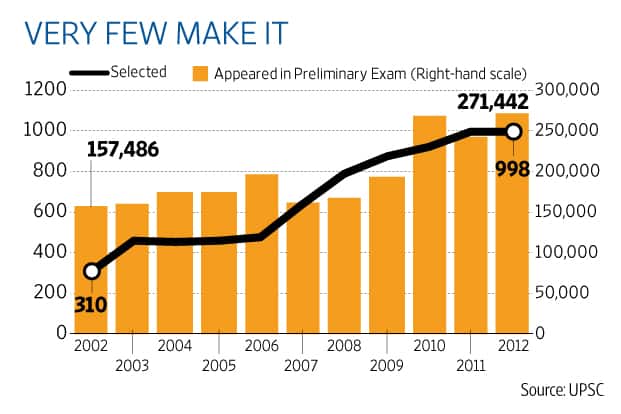 The civil services exam has among the lowest success rates among competitive examinations. More than 40.59 lakh people applied during 2002-2012. Only 20.11 lakh appeared for the preliminary exam. Those who qualify the preliminary stage have to go through two more stages: main examination and interview. The entire process lasts 9-10 months. The overall success rate has always been less than five people per 1,000 applicants. 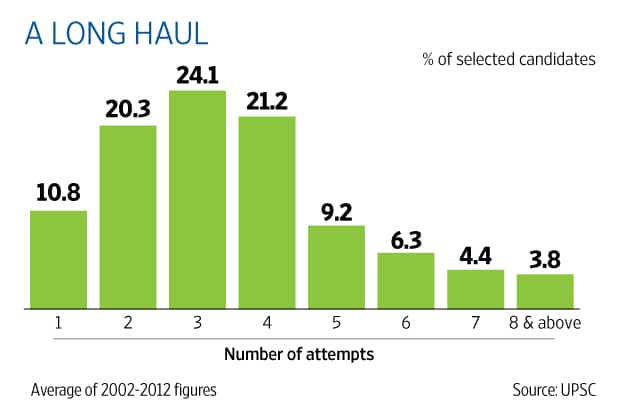 However, if there is one example of the Indian youth not giving up, it is the civil services exam. Only one in every 10 candidate succeeds in the first attempt. 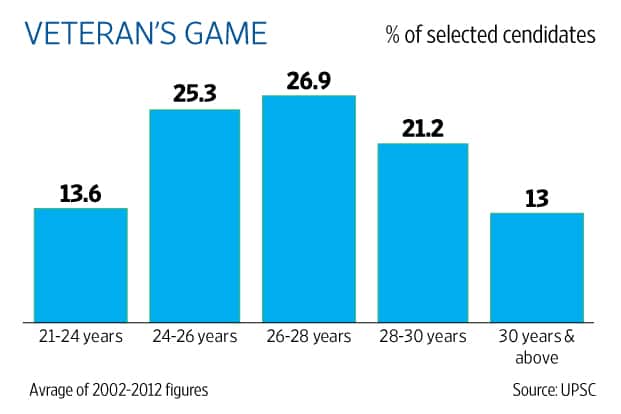 The civil services has always been viewed as a dangerous career choice because it might be too late to pursue other avenues if one does not succeed. However, this does not deter aspirants to continue their dogged pursuits, often well past their mid-twenties. Satyendranath Tagore, the elder brother of Rabindranath Tagore, was the first Indian to qualify for the Indian Civil Service exam in 1863. Tagore was an author, song composer and linguist. Recent data, however, shows that technocrats are dominating the civil services exams. Those with an engineering and medical background have the highest success rate among interviewed applicants. This might be so because those who enter engineering and medical colleges in India have to undergo tough competition right after higher secondary level. In that sense, they are, statistically speaking, the creamy layer in a given lot of students. 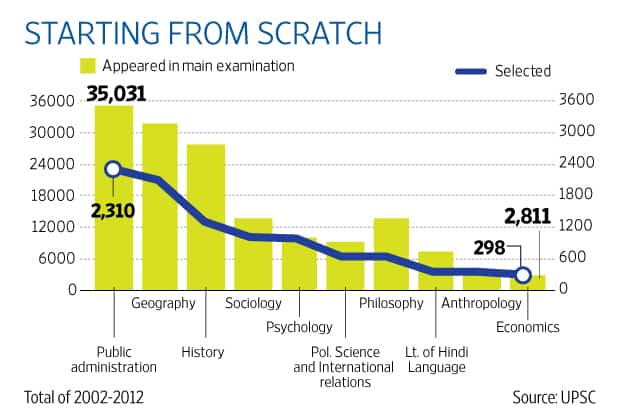 The background of a candidate doesn’t mean that the person automatically opts for that subject in the main examination. Neither engineering nor medical sciences are among the top 10 subjects. Public administration is the most preferred subject. The reason for its popularity might be a shorter syllabus with many things in common with the general studies portion for the preliminary examination and easy availability of preparatory material, said Rakesh Kumar, who qualified the civil service exam in 2009.

Delhi had the maximum successful candidates in the decade up to 2012. That could be perhaps owing to the number of top Indian educational institutions in that city. Delhi University, Indian Institutes of Technology (IITs) and Jawaharlal Nehru University (JNU) have sent the maximum number of candidates to the civil services. Indeed, in JNU, the library’s reading room has been christened Dhaulpur House, the building which houses UPSC headquarters.

However, if one looks at the home states of serving IAS officers, Uttar Pradesh and Bihar top the list. That isn’t so surprising, given that these states (if one includes Jharkhand which was carved out of Bihar in 2000) are the top two by population. But socio-economic factors might also be at play with the tag of an IAS officer putting a premium in these states. For in many states, for instance West Bengal, the number of serving IAS officers does not match the state’s rank in population.

The disproportionately high number of successful candidates from Delhi is also a reflection of the fact that a large number of those who aspire to get into civil services come to this city for preparations.

The tale of getting into the civil services is one of hard work and dogged perseverance. That’s why it is all the more baffling how the Indian bureaucracy, which comprises such hard-working and committed people, earned the disrepute of running what is considered an inefficient government machinery.