Amravati is known for its cotton, Bhubaneswar for its temples, Chennai for its auto industry, Kadapa for its stone, Jabalpur for its mines, Moradabad for its brass ware, Sangli for its turmeric producers and Udaipur for its palaces. This distinctiveness acquired by scores of cities over several decades makes them India’s growth engines and gateways to the world.

What creates this distinctiveness? The access to capital, skills, technology and availability of public infrastructure help cities to leverage their intrinsic strengths, leading to higher productivity of urban areas. In India, for example, an average urban job has approximately 1.9 times the productivity of an average rural job in the manufacturing or industrial sector, and the corresponding multiple is about 1.7x in the services sector. Thus, it is no surprise that urban India contributed 57% to the country’s gross domestic product (GDP) in 2012, accounted for 43% of consumption and was home to 63% of its consuming class households. Of this, 54 metropolitan cities (urban agglomerations with a population of 1 million or more) spread across 65 districts (referred to as metropolitan districts) alone accounted for 40% of India’s GDP, 45% of its consuming class households and 37% of its consumption. The economic might of metropolitan cities is not an Indian phenomenon alone. For example, in Brazil, 26 metropolitan cities account for 44% of the country’s population, 60% of its GDP and 54% of its consuming class, while in the US, 52 metro cities account for 55% of population, 59% of GDP and 55% of the consuming class.

By 2025, the contribution of metropolitan cities to India’s growth is only set to further increase. Sixty-nine metropolitan cities spread across 79 metropolitan districts will house 78% of India’s urban population, 47 million aspirer households and 43 million consuming class households, and contribute 77% to urban GDP. With an area of 427,000 sq. km, these districts will provide similar market potential offered by India’s eight ‘high performing’ states (with a per capita GDP of 1.2 to 2 times that of India’s)—Kerala, Maharashtra, Uttarakhand, Gujarat, Tamil Nadu, Haryana, Andhra Pradesh and Telangana (considered jointly), and Himachal Pradesh with an area of 794,000 sq. km, roughly double that of the 79 metropolitan districts.

Top quartile metropolitan districts will have an average annual per capita income of ₹ 3.47 lakh—four times that of India’s—and account for 20% of the country’s consuming class households. Expectedly enough, the bottom quartile districts will have a per capita income of about ₹ 67,000 and account for a mere 4% of India’s consuming class households. In short, the contribution of the top 20 cities to India’s growth is only set to rise over time, as some of them equal the size of countries in the next 10 years. Bangalore, for instance, will have a population equivalent to Belgium’s today, and a standard of living similar to Croatia’s today.

Companies such as real estate developers, lighting and sanitaryware manufacturers looking to tap India’s consuming classes, and even niche entities such as those in women’s fashion, furniture and household linen could focus on the 69 metropolitan cities and the 79 metropolitan districts housing them. So should India’s retailers and e-tailers, looking to either make a first-time play in the country or expand their footprint. Allocating resources and building an early presence in the new and emerging metropolitan cities and districts of tomorrow is likely to pay off. Why? First the cost of entry and building leadership in these markets is likely to be substantially lower than in well-developed metros such as Mumbai or Chennai. Second, the emerging nature of these cities is also indicative of lower competitive intensity in these markets, providing more room to build customer relationships and loyalty over time. Third, building a strong footprint in these markets will make it easy to expand into contiguous high-potential districts that have consumers with similar psychographics. Our work shows that roughly 100 districts surrounding the 79 metropolitan districts will together account for 77% of India’s incremental GDP through 2025. 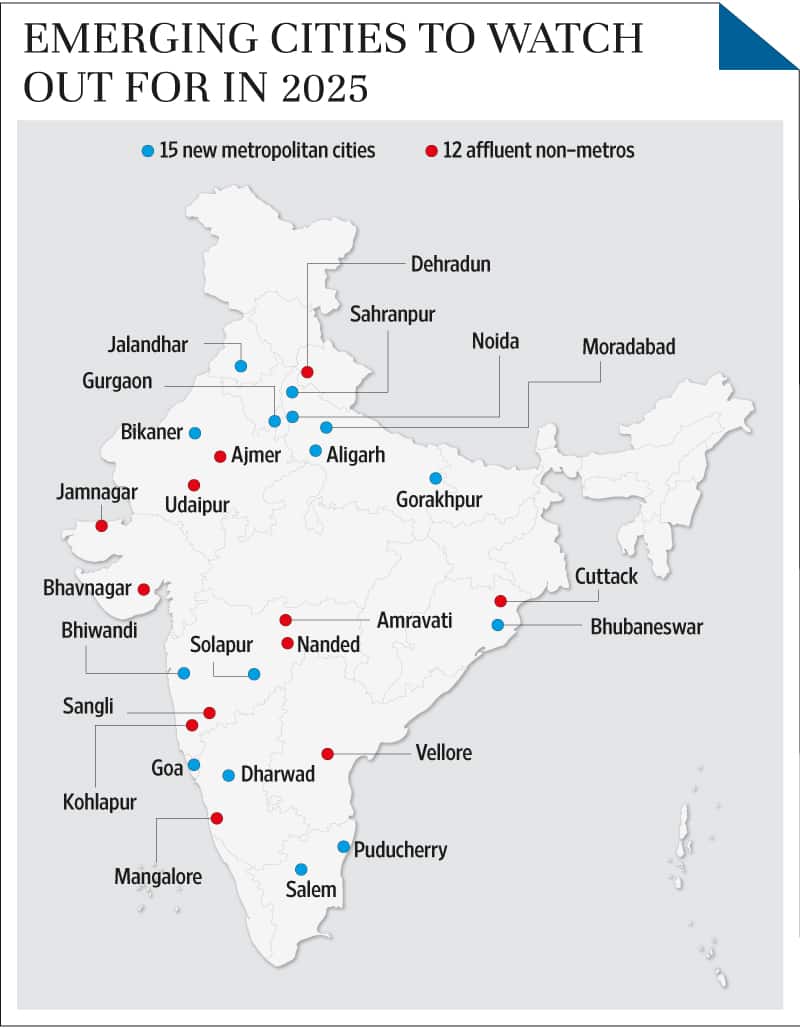 In essence, capturing the opportunities offered by cities necessitates the creation of a differentiated strategy. One that is backed by a business model that departs from treating India as regions/states, and is bolstered by granular product innovation capabilities, supply-chain efficiencies and channel strategies to effectively serve these markets.

To maximize the rewards from the urban explosion under way, the government of India, together with state governments, needs to act. Swift action has the potential to raise India’s annual GDP growth by at least 1 percentage point over the next 10-15 years. Our work highlights that the average per capita GDP of cities with a population of 1 million to 4 million is ₹ 1.14 lakh—close to the average per capita GDP of ₹ 1.05 lakh of cities with a population of 100,000 to 500,000. Such similarity in output across these cities underscores the haphazard nature of India’s urbanization, and the inadequacies of these metros to continuously re-invent themselves and offer a good quality of life to their citizens.

Wholehearted introduction and implementation of urban reforms spanning governance, planning and financing are required, but will alone not suffice. A sustained focus on crafting and re-inventing the economic strategy for cities is vital for the overall development of the city, including its infrastructure-oriented master plan. To do so, cities need to have the capacity and capability required to formulate these twin plans that intertwine the economic vision and strategy with the infrastructure-led master plan. Subsequently, city governments need to deliver on these plans in a time-bound manner through a tireless focus on execution, something most fall short on. Development of the Bandra-Kurla Complex in Mumbai as a new and alternative central business district was a tiny experiment to re-invent a part of Mumbai, and it worked. But undertaking such initiatives at scale across India is no easy task, especially for a country woefully short of capacity and capability. For instance, institutions in India are yet to fully recognize and award graduate degrees in municipal finance and urban economics. India has less than five reputed schools of urban planning, and often veterinary officers write municipal accounts in many cities and towns. A holistic strategy that pushes a spectrum of reforms and builds capacity at scale is the burning need of the hour.

The strategy that governments and companies adopt will sketch the facade of urban India in 2025.

Barnik C. Maitra is a partner at McKinsey, Sunali Rohra is an expert co-leading McKinsey’s work on urbanization in India and both are based in Mumbai. Shishir Gupta is a knowledge expert with MGI Economics Research based in New Delhi.