The implementation of the goods and services tax (GST) will lead to the abolition of entry taxes and other local body taxes—this has raised considerable concern among local bodies, especially in Maharashtra, that rely heavily on them for revenue. While these taxes are incorporated in the GST and will be devolved to the government of Maharashtra, there are high chances they will not be devolved any further (see Abhay Pethe’s article in this newspaper “GST: Now For Some Small Tricky Steps"). In this context, land-based financing mechanisms might be used aggressively as an alternative for buoying the revenue of local bodies.

The idea behind land-based financing is that the government should capture increases in land values that are the result of changes in regulations, provision of infrastructure and/or economic and population growth and invest it back in the city. Indian cities have a history of such practices which have been described in a recent government of India document titled “Value Capture Policy Framework".

One instrument that this policy framework mentions is charging for additional floor space index (FSI). FSI determines the amount of built-up space allowed to a developer on a plot of land. This instrument allows local governments to charge developers for building more than the basic FSI that is free of charge.

The municipal corporation of Greater Mumbai (MCGM) uses this instrument extensively and there are high possibilities of other cities adopting it in the near future. Therefore, some of the issues that have come to the fore from Mumbai’s experience need to be highlighted. 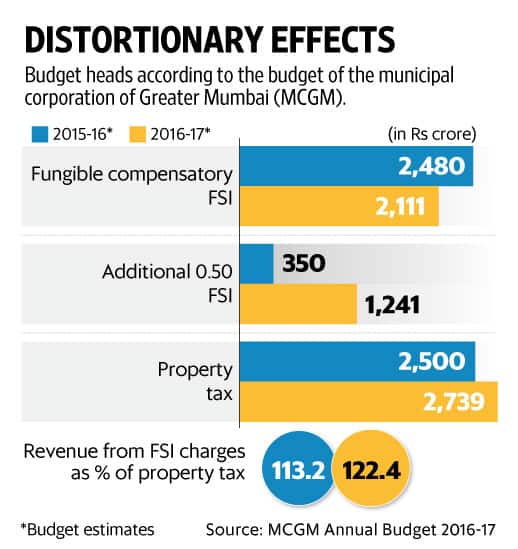 Mumbai has a basic FSI of 1.33 in the island city and 1 in the suburbs. Developers can purchase additional 0.5 FSI and can further purchase 35% fungible compensatory FSI. Both have to be purchased from the MCGM at 60% of the ready reckoner rates if it is for residential use. The revenue collected from these is to be shared with the state government. The table shows the estimated revenue from the MCGM under the two budget heads for 2015-16 and 2016-17.

Although the notification mentions that this revenue will be used for infrastructure provision in Mumbai, it points to the worrying tendency of state governments to subvert the autonomy of urban local bodies. The fact that these decisions are taken unilaterally by the state government in an ad hoc manner and can be changed depending on its need is against the tenets of decentralization. Further, in the post-GST world, the chances of state governments cannibalizing revenue accruing to local bodies are likely to increase.

For comparison, the city of São Paulo in Brazil also imposes a charge on landowners to develop above the basic FSI. A Lincoln Institute of Land Policy report states that the revenue from this source was 8.9% and 5% of the property tax collection in 2010 and 2011, respectively.

One must note that these charges are all on new properties, and for Mumbai, given the large collections, there is a likelihood of burdening new homebuyers if the incidence of these charges is on them.

Third, while the policy framework suggests changing rate structures for increasing revenues, any such policy measure pertaining to land-based financing has to account for the impact on urban housing markets. In December 2015, the base for charges for additional FSI was changed from 2008 ready reckoner values to values of the year in which FSI is granted, and is one of the reasons collections rose (see table).

While this is a good move for ensuring buoyancy, it will most definitely have an impact on costs for developers and thus affect residential prices. While making these decisions, governments should not be satisfied with increasing revenue alone, but must examine the impact of such policies on housing markets.

For cash-strapped urban local bodies in India, the revenue potential that land-based financing offers could result in it being used recklessly. In wielding these instruments for raising revenue, the government should be mindful of their distortionary effects.