The interests of a free, fair media will be better served by a transparent, modern regulatory regime

A few nights before, late on 25 June, a few minutes before midnight, President Fakhruddin Ali Ahmed imposed a national emergency under Article 352 of the Constitution. It was the third time an emergency was being declared in India.

The first was declared on 26 October 1962, soon after China invaded India. The second was on 3 December 1971, when India’s third war with Pakistan started.

The third declaration of emergency was more interesting and completely insidious. A 26 June 1975 notification in the Gazette of India, formalizing the Emergency, claimed India’s security was being “threatened by internal disturbances".

The previous day, Jayaprakash Narayan, the socialist leader spearheading the anti-Indira Gandhi forces, had called for a national civil disobedience movement. Prime minister Gandhi was the head of an unpopular, but majority Congress government that had swept to power after the 1971 war that India won. 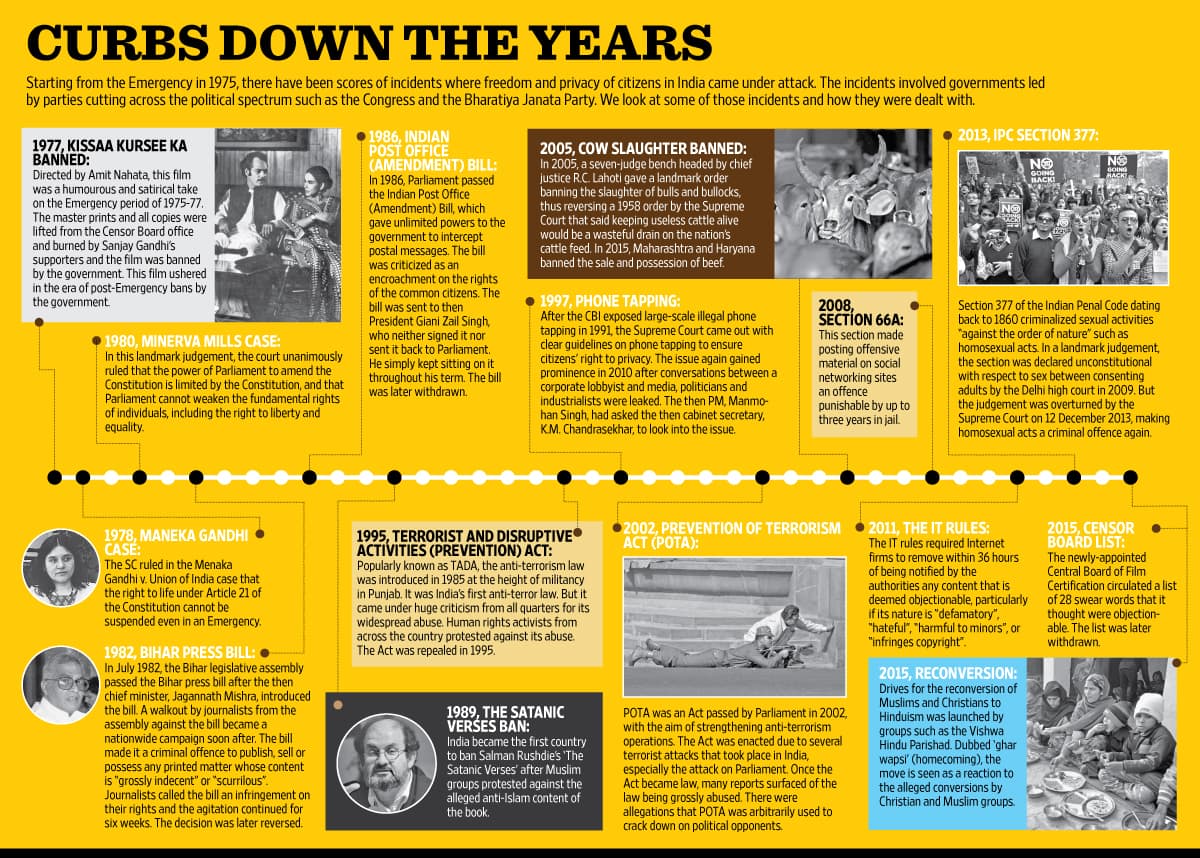 The Congress had won 352 seats (in a numerical quirk, the same number as the section of the Constitution that allows an emergency to be declared), but the government was soon facing accusations of corruption and economic mismanagement.

On 12 June 1975, the Allahabad high court ruled that Gandhi had been involved in corrupt electoral practices in the previous Lok Sabha polls, declared her election to Parliament void, and barred her from elected public office for six years.

Soon after imposing the Emergency, the government issued a censorship order. The order was accompanied by guidelines which, though generic in scope, were extremely repressive. For instance, they barred the publication of anything that could bring the government into “hatred or contempt".

In 1976, the government passed the Prevention of Publication of Objectionable Matter Act, which again gave it sweeping censorship powers and sought to muzzle the media. The law was eventually repealed by the Janata Party government that came to power in 1977.

Could this happen again?

Would it need to?

“It would be easy to suppose that the real enemy of democratic politics must be the active censorship of news—and therefore that the freedom to say or publish anything would be the natural ally of civilization," writes Alain de Botton in The News: A User’s Manual.

But there is a far more “insidious" way of doing so in the current information age, de Botton goes on to explain.

“A contemporary dictator wishing to establish power would not need to do anything so obviously sinister as banning the news; he or she would only have to see to it that news organizations broadcast a flow of random-sounding bulletins, …with little explanation of context, within an agenda that kept changing…, interspersed with constant updates about the colourful antics of murderers and film stars," de Botton writes.

Even without the “contemporary dictator", we are getting there.

The regulatory and commercial context in which newsrooms work hasn’t changed.

Free speech isn’t absolute in India. Article 19(1) of the Constitution may make it seem so, but Article 19(2) that follows restricts such freedom of speech and expression “in the interests of the sovereignty and integrity of India, the security of the State, friendly relations with foreign States, public order, decency or morality or in relation to contempt of court, defamation or incitement to an offence".

That’s a pretty sweeping list, and entirely subject to the interpretation of the courts. It is the kind of restriction that media companies should challenge.

The courts may see reason.

After all, in April, the Supreme Court agreed to look at the constitutional validity of so-called criminal defamation, which makes defamation punishable by jail terms of up to two years and which is used to good effect by people and entities in India wishing to muzzle the media (full disclosure: there are a few cases of criminal defamation against this writer and HT Media Ltd, filed by companies covered by Mint).

The court had earlier struck down the controversial Section 66A of the Information Technology Act, terming it “unconstitutional". The section prescribed a punishment of up to three years and a fine of up to ₹ 5 lakh or both for “any person who sends, by means of a computer resource or a communication device, any information that is grossly offensive or has menacing character; any information which he knows to be false, but for the purpose of causing annoyance, inconvenience, danger, obstruction, insult, injury, criminal intimidation, enmity, hatred, or ill will, persistently by making use of such computer resource or a communication device; and any electronic mail or electronic mail message for the purpose of causing annoyance or inconvenience or to deceive or to mislead the addressee or recipient about the origin of such messages..."

Yet, in that very ruling, the apex court upheld Section 69A of the Act, which allows the government to block websites. The way such blocking is done is not clear. Worse, there have been some murmurs about the government considering a new law to replace Section 66(A) because, to paraphrase an argument often put forth, the Internet needs to be regulated.

In 2012, the Supreme Court ruled, while hearing the case between capital markets regulator Securities and Exchange Board of India (Sebi) and Sahara Group, that the courts could defer media coverage of some issues and cases for a limited period of time. (Sahara has filed a defamation case in a Patna court against Mint’s editor and some reporters over the newspaper’s coverage of the company’s dispute with Sebi. Mint is contesting the case.)

All of this doesn’t exactly add up to a conducive environment for journalists and newsrooms to speak the truth to power.

News has also always been vulnerable to commercial forces, which only seem to be getting stronger even as traditional media models come under question.

Everyone has hopped on to (those that haven’t soon will) the branded content and native advertising bandwagon, but most advertisers want these without the labelling and disclosure that tells readers (or viewers) that this is paid for. Worse, many publishers and broadcasters are keen to oblige.

Social media agencies have “rate cards" for celebrities on Twitter who can push anything, a product, a service, even a new ad for a product or service, for as little as a few lakh rupees (and with no disclosure about it being a promotional tweet).

The state itself continues to exert influence through the patronage of government ads, by deciding the import duty on newsprint, and the very existence of a wage board that decides on the salaries of tenured journalists.

The chances of another national emergency being declared are remote—never mind what L.K. Advani says—but the interests of a free and fair media will be better served by a transparent and modern regulatory regime that will require, at one level, far-reaching changes in laws (including in Article 19(2) of the Constitution), and at another, better self-regulatory processes by entities such as the Advertising Standards Council of India.

Subscribe to Mint Newsletters
* Enter a valid email
* Thank you for subscribing to our newsletter.
Topics
mint-india-wire the-emergency
Close
Recommended For You
Feedback
Select your Category
Your Message
No Network
Server Issue
Internet Not Available