How disabled friendly are India’s cities?

Hyderabad tops the list on this count, while Malapuram in Kerala comes last. The top 5 and bottom 5 cities by difference between share of disabled persons amongst workers and the population are shown in the map below. 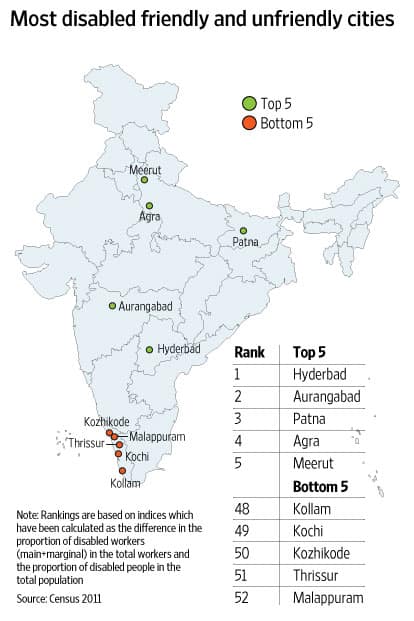 The ranking also reveals that only three of the 10 most populated cities were in the top 10 on this count, thereby showing that smaller cities are better at providing employment to the disabled. With emphasis on English proficiency being higher in bigger cities, finding employment for the disabled who may be migrants from smaller towns becomes even tougher. “A lot of people who may be disabled move to bigger cities for jobs. But most of these people have received their training in regional languages. This reduces employment possibilities in places such as Delhi and Mumbai," said Dipendra Manocha, president, National Association for Blind in Delhi.

Javed Abidi, honorary director of the National Centre for Promotion of Employment for Disabled People, said it is also easier for disabled people to seek employment or be self-employed in smaller cities. “In smaller towns, people know each other and there is less chaos as compared to a bigger place. Many of them could be self-employed, working in shops or local establishments," he added.

In terms of gender gap in the workforce participation for the disabled, Surat fared the worst with a 41.7% gap between males and females. Most of the cities in southern India witnessed the lowest gender gaps in main and marginal workforce of disabled people among the million-plus cities.

According to Manocha, this is largely because most southern cities have institutions for training and job placements of disabled people in smaller towns as well because of which there is no need for them to migrate to the bigger cities. At the same time, there is a difference in attitude towards education and jobs of women in southern cities as compared to the rest of the country.

“Cities such as Surat and Ahmedabad have a number of institutions for training disabled people, as a result of which a lot of people from smaller towns who do not have these opportunities migrate to these cities. But naturally this is more visible among men as disabled women especially are not encouraged to work," he said. A comparison of overall gender gap in employment with the gender gap among disabled shows the latter to be lower for most cities. There is a caveat to this analysis. Disability figures in India are probably under-reported due to the stigma attached to it. A Plainfacts published last year had cited Planning Commission and World Bank estimates which put the figure at 4-8% of the population.

Employment prospects also depend on the kind of disability which affects a person. Analysis of census data shows that those suffering with disability of movement, speech, sight and hearing are more likely to be employed than the ones with multiple disabilities or mental disability. This is borne out by the relative share (share in total number of workers divided by share in population) of workers with disability of the former kind in comparison to the latter. Manocha explains that this gap is due to the reservation policy for the disabled, which does not give reservation to those with mental illness. Experts say that in order to become more disabled-friendly, cities must also change their attitude to become more aware and sensitive towards persons with disability, in addition to providing better skill development.