The roots of rural distress

Forgiving farm loans is no solution. The data shows there's a far more fundamental problemmost agricultural households are unable to keep body and soul together.

There’s nothing new about rural distress. Nor is it surprising. If the income of almost 70% of farm households is less than their consumption expenditure, according to the government’s own data, then it’s obvious they’ll be “distressed". Yet that’s the inescapable conclusion from the National Sample Survey Office (NSSO) report that mapped the income, expenditure and indebtedness of agricultural households in India in 2013. 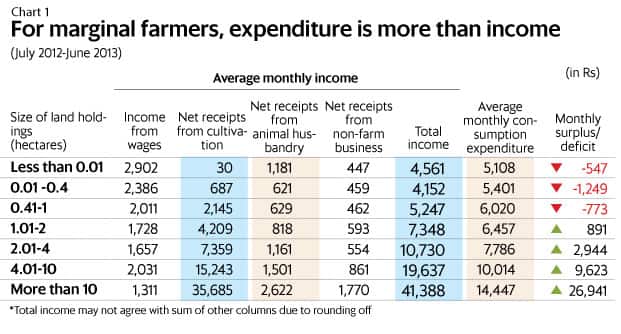 The chart also shows that for farm households that have a hectare of land or less, net receipts from cultivation make up less than half their total income. They manage to eke out a precarious living by supplementing their income with income from wage labour, animal husbandry and other non-farm businesses.

The proportion of receipts from farming goes up as land holdings increase. Any waiver of crop loans, therefore, benefits those with large landholdings the most.

The next obvious question is—how many households do we have that own 1 hectare or less? The answer (in Chart 2), again taken from NSSO figures, is 69.4%. So, the majority of agricultural households are in chronic distress, unable to keep the wolf from the door. Another 17.1% households—those owning between 1 and 2 hectares—had an average monthly surplus of Rs891. A major illness, or perhaps a couple of bad monsoons, would be enough to wipe out all their savings. 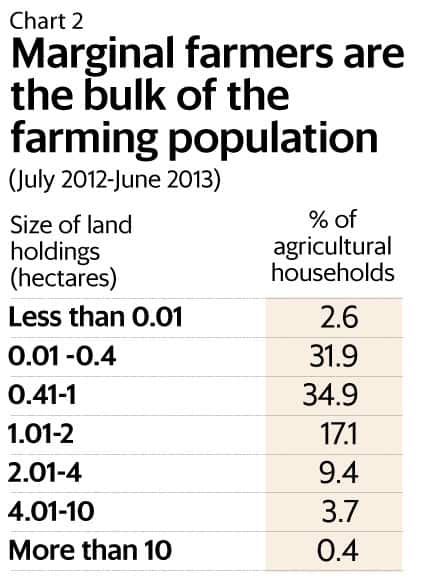 But this is India and the broad averages do not show the whole picture. We need to look at the caste factor too: 82.7% of scheduled caste agricultural households are marginal farmers. Chart 3 shows that, for scheduled caste households, average monthly consumption expenditure exceeds monthly income in all major states except Karnataka, Madhya Pradesh (MP) and Maharashtra. Ironically, the last two states are at the forefront of the current farmers’ unrest. Eight decades after B.R. Ambedkar wrote his Annihilation of Caste, the bulk of Dalit farmers in the country are unable to scrape a bare living. 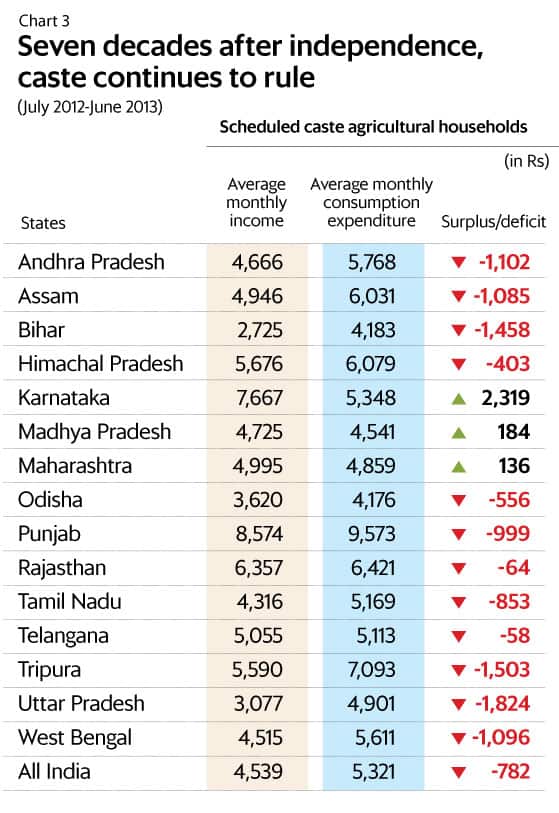 Who will gain the most from a bank loan waiver? Chart 4 shows the sources of loans for farmers. The poorest of them borrow mainly from moneylenders and this proportion goes down as one moves up the land-holding status ladder. As is clear from the chart, it is the relatively prosperous farmers who benefit the most from a loan waiver by banks. 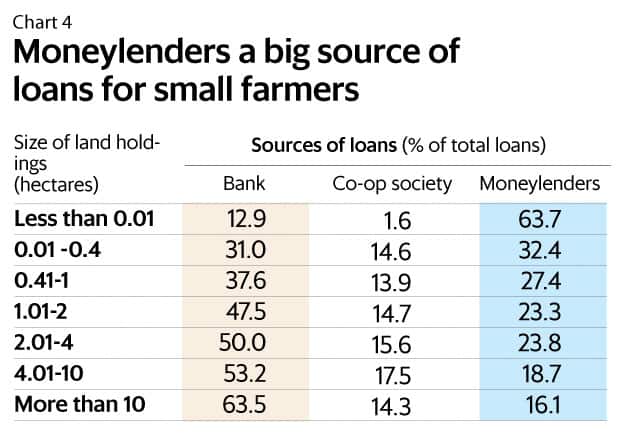 How important are bank loans as a source of borrowing in the states of Uttar Pradesh(UP), MP, Maharashtra and Tamil Nadu, where farm loans have either been waived or where farmers are agitating for it? In MP, for marginal farmers, moneylenders are the chief source of loans, so they will benefit the least from a loan waiver by banks. Maharashtra and Tamil Nadu have a lot of lending by cooperative societies, so waiving those dues is also important. In UP, it is the biggest farmers who gain the most from a bank loan waiver. 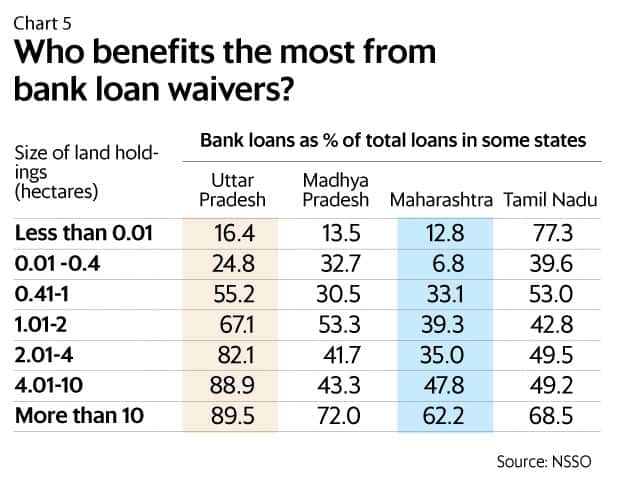 Forgiving farm loans, as practically everybody has said, is no solution. The data shows there’s a far more fundamental problem—most agricultural households are unable to keep body and soul together. We could buy time by subsidizing their inputs and raising the prices of their produce, measures necessary in the short run to alleviate distress. But every census shows the number of marginal farmers going up, and a further sub-division of minuscule plots will only make the situation worse. In short, it’s absolutely essential to get these people off the land and into far more productive industrial employment. The alternative is mounting social unrest.