Thanks for Visiting Mint
You seem to have an Ad Blocker on. Please turn it off in order to continue, or whitelist Mint
HOW TO TURN OFF AD BLOCKER
OR
REFRESH IF YOU ALREADY TURNED OFF THE AD BLOCKER
Home >Opinion >Mani Ratnam: He makes the DVD redundant

It’s a big, big summer at the movies. Some of life’s most mundane, but precious moments are spent in a dark theatre—just before the screen lights up and a movie begins. I have never over-lived it. So beginning this week, when Hrithik Roshan returns to the box office after two years, life’s looking up. There’s Prakash Jha’s Rajneeti, Mani Ratnam’s Raavan, Vikramaditya Motwane’s Udaan, Mike Newell’s Prince of Persia, Anusha Rizvi’s Peepli Live. And then there’s Alejandro González Iñárritu’s new film, Beautiful, set in Barcelona’s malaise-ridden urban fringes, which I will somehow manage to watch.

The one I am apprehensive as well as terribly excited about is Raavan. Apprehensive, because I agree with Mani Ratnam’s critics who accuse him of scratching the surface of big political and social issues and making love stories out of them. Often, the milieu and characters in his Hindi films don’t breathe easy. I’m excited, because he makes movies magical. A master of the grand canvas, the chiaroscuro and the visually potent moment you can’t imagine being captured any other way, Ratnam knows how to make visuals speak. Even as characters come and go, some of them animatedly doing big things such as contesting elections and planting bombs, willy-nilly you give in to the visual wizardry. 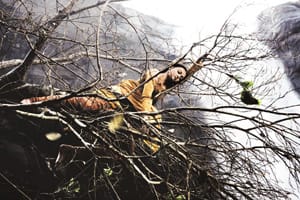 Framed: Raavan, with Aishwarya and Abhishek Bachchan, releases on 18 June.

Ratnam is the antithesis of “digital". A complete commercial director, he lavishly indulges in technique—be it camerawork or song. He has said (when he comes out of the woodwork every time a film releases) that he lets his technicians do half his job. He works with the country’s best cinematographers (Santosh Sivan has filmed Raavan, in Ooty, Kolkata, Mahabaleshwar and the lush forests of Kerala) and best music composers, mostly A.R. Rahman. You could call his films brilliant, giant con jobs.

The stories in most of his films follow a pattern, and at their heart is a man-woman relationship. Mouna Raagam (1986), Nayagan (1987), Roja (1992), Thiruda Thiruda (1993), Bombay (1995), Iruvar (1997), Dil Se (1998), Yuva (2004)—all these films have a man-woman relationship either in flux or thwarted or in conflict, which finally transforms into a magical chemistry. Even his strongest women have a tenderness. He contemporizes mythology with a glossy edge.

I can’t wait to be conned again. Raavan, inspired by the Ramayan, and set largely in a forest, is a story of revenge and love. It’s is a bilingual film with Tamil actor Vikram, Abhishek Bachchan and Aishwarya Rai Bachchan in the lead roles. The connotations to Maoism are unmistakable in the trailers. And the forests look beautiful and menacing. This is a film, like all the films of this 54-year-old director, that you can’t watch on a DVD.