"storyDirectUrl"
OPEN APP
Home / Opinion / Online-views /  What is behind inter-state differences in inflation?

What is behind inter-state differences in inflation?

Mumbai: With consumer price inflation fast emerging as the focal point of monetary policymaking in India, perhaps it is time to delve into the not-so-insignificant differences in inflation across states.

To begin with, inflation, both retail and wholesale, has risen in recent months. This has raised concerns about the scope of further interest rate cuts in the near future.

All-India retail inflation is now at a 23-month high of 6.07% year on year, above the upper bound of the Reserve Bank of India’s (RBI’s) inflation target.

However there are five major states—Assam, Himachal Pradesh, Kerala, Tamil Nadu and Uttarakhand—with inflation below 5% in July 2016; that is, below the target set by RBI for March 2017.

On the other hand, inflation is now more than 6% in 11 of the 23 major states and Union territories (including Goa and Delhi).

Therefore, it might be useful to know what is causing the differences across states.

Data from the ministry of statistics and programme implementation (MOSPI) shows that the inter-state variation in inflation is mostly a rural phenomenon, with much of it being driven by differences in rural food inflation.

The current series of consumer price inflation, with year 2012 as the base, consistently shows the inter-state variation, or standard deviation in rural inflation, to be higher than in urban inflation. Also, in case of states with relatively higher inflation, it is mostly rural food inflation that is driving the rural-urban gap in those states.

The divergence in zone-wise rural food inflation in India is now the widest since at least January 2014, when measured by the absolute difference in inflation between the maximum and minimum food inflation across the six zones.

“The variation in inflation across states could be partially attributable to inter-state transportation costs and to the differences in tax regimes across states, which often impede equalization of prices across regions," said Rajeswari Sengupta, professor of economics at the Indira Gandhi Institute of Development Research in Mumbai.

Prima facie, there exists only a weak positive correlation between the state-wise rise in rural wages and states’ rural inflation, as measured by the consumer price index for agricultural labourers, with base year as 1983. 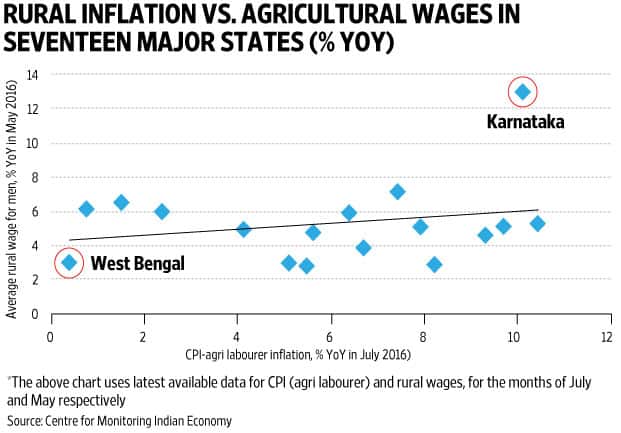 Correlation does not necessarily imply causation. Moreover, the correlation gets weaker if we use the rural consumer price inflation according to the new series, that is with base year as 2012. The possible impact of rural job guarantee, that is the Mahatma Gandhi National Rural Employment Guarantee Scheme (MGNREGS) on rural inflation, by raising rural wages and hence cost of farm inputs, has been a matter of much debate.

However, MGNREGS may not have been the only factor pushing up rural wages, as noted by a 2012 RBI occasional paper authored by G.V. Nadhanael. According to the paper, the rise in rural wages post-2007 can be attributed to a shift in labour supply from agricultural to non-agricultural work, like construction and services segment.

Meanwhile, the drop in labour force participation rates of women also contributed to the rise in rural wages.

Such a rise in rural wages could be one of the factors responsible for higher inflation as “wages impact prices… (by) …feeding into cost of production" as argued by the RBI occasional paper. However, the causality might often run in the other direction, as noted by the paper itself, when nominal wages adjusted to rise in prices. Thus, it is as yet difficult to say whether or not rural wages are the driving force behind rural inflation. If not, then we would have to search somewhere else to find clues on what is causing differences in rural inflation across states.

Given the not-so-insignificant variation in inflation across states, further attention and research is required on the subject.