In the calendar year that just ended, Rahul Dravid scored five centuries and amassed 1,145 runs, more than any other cricketer. And yet, last week, after a month’s reflection following the disastrous tour of Australia, Dravid decided it was time to leave. 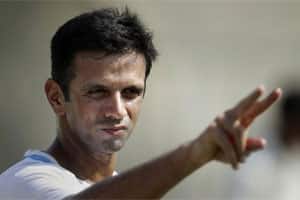 I had a lump in my throat, even though his departure was inevitable; I spent the afternoon watching his 148 at Headingly in 2002. And I looked back at the bittersweet Indian tour of the grim summer in England last year, when it seemed India had forgotten to send 10 more cricketers to join Dravid on the tour. During the season when it was impossible for anyone from India to look at another cricket fan in the eye, Dravid was the tricolour, making sure that the series would be remembered not only for the utter humiliation of the 4-0 whitewash, but also for his Herculean efforts, retrieving some honour.

With that unbeaten 146 at the Oval in the final test, Dravid embarrassed his colleagues who had lost their spirit, by batting the way one should, treating each ball on merit, and kept reminding us of what was possible. On the fourth day he carried his bat through the shattered innings, and 10 minutes later, stepped out to bat again as an opener, a role thrust upon him because Gautam Gambhir was injured.

Hold that thought for a moment: how many times had that happened? Someone was injured and he was asked to open the innings, and he did it; told to bat at No. 6, and he complied (once in Kolkata, from the batting position that signals the last stand before the tail-end begins, he scored 180, steadily helping V.V.S. Laxman who helped himself to 281, and India beat Australia). Often Sourav Ganguly would ask him to keep wickets so that the team could add a batsman, and Dravid put those gloves on. He stepped aside to make way for younger cricketers who needed to be blooded in one-day cricket; and when their resolve crumbled, as it happened last summer, he came back in his blues, again anchoring India.

Watching that 148 again (or the 233 and 72 not out at Adelaide in 2003) reminded me of what made Dravid so important. Not only those firm boundaries and occasional sixes (for Dravid’s knock often eliminated unnecessary fireworks), but the focus to build an innings. Not in the boring, dour, workmanlike way, as a Geoffrey Boycott would, but with the khadoos, or stubborn nature of a Sunil Gavaskar, wearing down the patience of the bowlers with resolute defence, killing the spin, and then punishing them unsparingly with beautiful drives and nifty flicks, prolonging their agony. It was a delight to watch him leave the sort of ball that would tempt a Virender Sehwag to flash. Sometimes Sehwag would miss; sometimes he’d send the ball over the ropes; but often he’d reward the bowler with an undeserved wicket. Not so with Dravid. To see him look at the ball intently, his eyes wide open, unblinking, was like watching Arjuna, full of concentration, about to release the arrow. The team’s needs always trumped his own. He made batting look elegant, his strokeplay was delicate and deft, his shield solid and impregnable, his attacking shots deceptively firm, and his presence on the crease reassuring beyond measure.

And his centuries came when they mattered, often winning the match for India, or saving it from a certain defeat. The solidity he gave the Indian team cannot be measured. In a side known for unpredictability if a couple of wickets fall quickly, he had the nerves of steel to steady the ship when it shook, as if about to submerge. Crucially, he scored more runs for India in matches won abroad, and won more man of the match awards abroad than any other Indian. And he faced more deliveries than any batsman, ever.

Think of the next Test—a green wicket with some dew, breeze helping the bowler who runs in, and there, the wicket falls: India is 9/1. You look at the pavilion expectantly. He won’t be stepping out.