Infosys is trying too hard to flaunt its digital chops

With Infosys once again failing to beat Accenture Plc's revenue growth, investors really have no reason to give too much credence to the management's optimistic commentary

Oh no, no, no
That old time fire is gone
It’s not so much things you say, love
It’s what you don’t say I’m afraid of

— Neil Diamond (I Got the Feelin’)

Infosys Ltd. struck a cheery note with its June quarterly results. But then, what option did it have?

The management of the Indian software exporter is buffeted by criticism. Founders are giving chief executive officer Vishal Sikka heat for everything from overpaying himself to overpaying for an acquisition. Work visas for Indian techies have become a political hot potato under the new US administration, prompting Infosys to commit to thousands of new American jobs, including notably in vice president Mike Pence’s home turf of Indiana, famous for its code-writing talent.

Meanwhile, client demands are reaching the clouds. Literally and metaphorically. Global corporations are no longer interested in enterprise software that requires full-service application maintenance and development, the bread and butter for the Indian tech companies. They want digital stuff. Workers in India are turning anxious about layoffs, though Infosys has said there’s nothing unusual about separation rates this year. Nevertheless, New York-listed depository receipts of Infosys have shed almost a sixth of their value in the past 12 months. 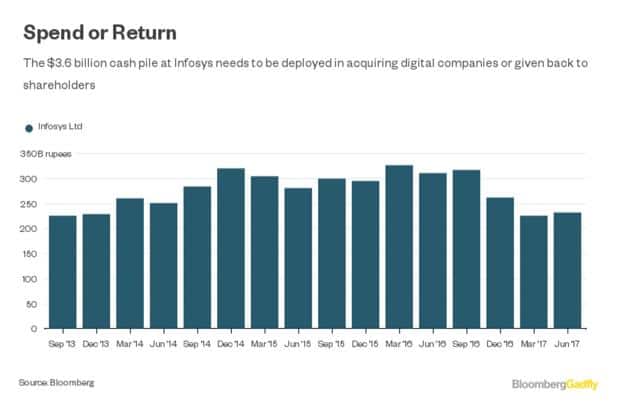 And yet, while presenting its fiscal first-quarter results, Team Infosys went out of its way to look relaxed and act cool. In line with the executives’ new buttoned-down look was a press release peppered with customer testimonials.

Infosys appears to be trying hard — a tad too hard — to flaunt its digital chops. What’s the point of telling investors about the wonderful data analytics tool Infosys built on Amazon Web Services for Levi Strauss & Co. in the earnings release, when the financials are mostly ho-hum?

Yes, sales picked up a bit during the period, and the 2.7% quarter-on-quarter climb was a notch better than the disappointing 2% increase at its larger rival, Tata Consultancy Services Ltd. But the performance wasn’t enough for management to boost its guidance of 6.5% to 8.5% revenue growth for the full year. The operating margin was flat at 24%, and nothing exceptional is expected on that front for the next nine months, either. Gadfly has maintained for some time that Indian vendors’ inability to embrace “smac" (social, mobile, analytics and cloud), as well as the pressure on their pricing from robotics and artificial intelligence, are rendering their cheap-labour-centered business model outdated.

With Infosys once again failing to beat Accenture Plc’s revenue growth, investors really have no reason to give too much credence to the management’s optimistic commentary. It’s what Sikka doesn’t say that they should be afraid of. Bloomberg