In twisted hindsight, a media observer has termed the so-called “sting" operation by a television channel as a blessing in disguise, since it has suddenly raised the intensity of public attention to ethics in India’s electronic media. That is a shame, though the comment was surely in the best of intentions and while criticizing the Live India reporter’s “investigative report" on Uma Khurana, a Delhi-based schoolteacher. The question is, why did matters have to reach that horrific crescendo before the media industry could look seriously in the mirror? Was not the increasingly substandard and often bizarre “news" programming across the multitude of television channels ample cause for the more responsible media to take a stand?

It isn’t easy to deny that there has been abdication of collective responsibility in the media—in television and print—to adopt and enforce industrywide standards and ethics. And when the government proposed checks through the Broadcast Bill and a content code, the industry quite vehemently opposed the notion of state regulation, citing the integral nature of freedom of expression in a democratic polity. While most agreed on the need to introduce some norms, they felt this was best done, and monitored, by the industry itself, in order to uphold the freedom of the press. There were also arguments that the existing set of regulatory checks, such as against libel and defamation, in the Indian Penal Code were enough and all that was needed was stricter enforcement, not new legislation. 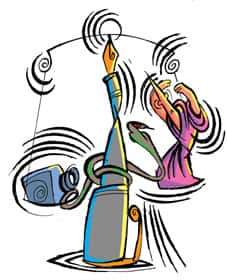 The fact is that while investigative journalism is a way of ensuring democratic accountability, we have collectively failed to ensure genuine public interest as the sole motive for such journalism.

The adverse implications of mushrooming “news" channels (by one count, more than 100 24-hour news channels exist), coupled with intense competition for audience volumes in a TRP-led market, couldn’t have been missed by anyone. Content quality has suffered immensely at the hands of the “market" forces driving sensationalization, feeding on the warped view that that’s what hooks the masses the most.

So, should not the more quality-conscious players have taken the initiative, perhaps a serious public debate, to start with? It is apathy, coupled with the Khurana trigger, that raised the pressure for state regulation. This is a strong lesson. Media makes it a point to criticize any lack of standards across the political and economic landscape. Yet, it has been tardy in setting its own house in order.

The government’s approach, too, has been ad hoc. Members of the media are right in arguing that the provisions of draft law and its content code, as well as the proposed Broadcasting Regulatory Authority of India, connote a larger role of the state than the media’s. Equally valid is the criticism by members of civil society that the drafts do not allow for much public participation. That is a serious distortion, as it is public interest that is to be the determining factor in the trade-off between freedom of the press and the individual. Meaningful debate, therefore, is essential, but delays should not be acceptable to any stakeholder.

What’s imperative now is to adopt and build on the best global practices for media accountability. For instance, the Press Complaints Commission in the UK is a successful model that ensures wide public participation as well.

How should media be held accountable? Write to us at views@livemint.com