If the Union Budget looks ahead at the year and makes forecasts on how the government will gather revenue and spend it, the Economic Survey looks back to take stock of what happened and then lays out the big-picture goals, challenges and scenarios for the Indian economy. It is more of a vision statement than a to-do list. Just as the Budget document has the signature flavour of the finance minister, the Survey carries the DNA print of the chief economic advisor. The key message of Arvind Subramanian’s Economic Survey for 2017-18 can be summed up in one phrase: revival and risk, and he shows this in one chart on the behaviour of bond prices and stock prices. (See table)

The rise and rise of the stock market points to the revival in the economy and the rise in bond yields points to worries on deficit, inflation and oil prices going up. Why are the stock markets rising? The Survey finds that the revival part of the story is “robust and broad based". With the shock of demonetization and the Goods and Services Tax behind us, gross domestic product (GDP) growth for the current year is estimated to be 6.75% and for the next year between 7 and 7.5 %, making India the fastest growing major economy in the world. The reason for the robustness is the implementation of several deep reform initiatives. GST reform has added another 3.4 million indirect tax payers and GST collections are on an upward trajectory. In fact, the overall trend for widening the tax net is positive. The Survey finds that post-demonetisation, there has been a 0.8% monthly increase in new direct tax filers—an annual growth of 10% or about 1.8 million new taxpayers. 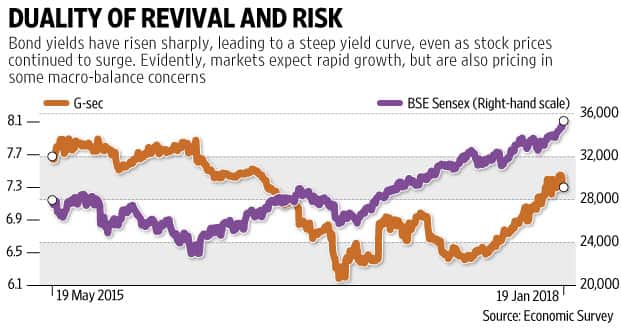 India’s economic growth had stalled due to the twin balance sheet problem wherein firms could not invest more due to unpaid loans they had taken in the past, and public sector banks were burdened by unpaid loans taken by corporate entities that caused an overhang of bad debt and prevented fresh lending. Like a Quentin Tarantino movie, with everybody pointing guns at everybody else, the economy was in a frozen frame. The enactment of the bankruptcy code and the process of debt resolution has begun to solve one part of the problem where firms are going in for resolution and repayment rather than stalling the process through court cases. The bank viability issue is getting sorted by the capitalization of some public sector banks. The first signs of credit off-take are visible, says the survey with real non-food credit growth rebounding to 4% in November 2017 on a year-on-year basis, while the squeeze on real credit to industry is abating. The rising stock market is taking note of this reform and has moved higher and higher over 2017. This is clearly worrying the economist in Subramanian who flagged the risks of a runaway market several times in his presentation after the Survey was tabled in Parliament.

Rising yields on the bond market are telling a different story and this one is about risk. We know that bond yields rise when bond prices fall. Bond prices fall when the market thinks that interest rates will rise. The bond market is worried about three things: a rise in inflation, in oil prices and in the deficit numbers. Inflation numbers are showing an uptick after 13 months of staying below the target 4% number. The government already hit 112% of the total deficit number in the first eight months of FY 2018. Subramanian said in his press conference that every $10 hike in oil prices shaves 0.2-0.3% off GDP, worsens the current account deficit by about $10 billion and hikes inflation by about 0.2%. Without saying it explicitly, the Survey also signals that the bond market is worried about this being a pre-election year and therefore nobody is expecting a very tight sticking-to-deficit targets laid out earlier. It says: “Reflecting largely fiscal developments at the center, a pause in general government fiscal consolidation relative to 2016-17 cannot be ruled out." That’s what the bond market worries about.

What should the government do to fan the revival and mitigate the risk? “It should finish what it has started," says Subramanian. That means continuing reform, stabilizing the GST, completing the twin balance sheet actions by focussing on the ‘reform’ part of the solution, privatizing Air India, and staving off threats to macro-economic stability. The last point is clearly directed at a government that is in a pre-election year and it says: don’t lose the focus on fiscal prudence. It does look as if the roll-out of a universal basic income in this pre-election year will not happen if the government takes the warnings of the Survey seriously.