Like its predecessors, Narendra Modi’s sanitation programme is struggling

It’s eight months since Prime Minister Narendra Modi launched one of his pet projects, the Swachh Bharat Mission. One of its key proposals is to end open defecation by 2019 in a country where half the households don’t have a toilet at home. However, the number of people defecating in the open is certainly higher than the fraction of households that lack toilet: people who own a toilet in rural India don’t always use it.

Initially, the government announced that it would be building a toilet for every rural household that did not have one. Hence, allocations for the construction of toilets were expected to rise almost 10-fold. This, however, did not happen because of fiscal considerations. In fact, allocations for the current fiscal year have been slashed.

This is not a bad outcome, though: building so many toilets without working to change behaviour and attitudes would have only led to unused toilets.

In real terms, the allocation for the current fiscal year is lower than what it was in 2012-13. To be sure, the 14th Finance Commission has altered the way in which funds are shared between the Centre and states. Yet this decline is unwarranted since Swachh Bharat Mission is one of the schemes whose funding pattern has changed—states now have to spend double the money per toilet than they did under its predecessor Nirmal Bharat Abhiyan. 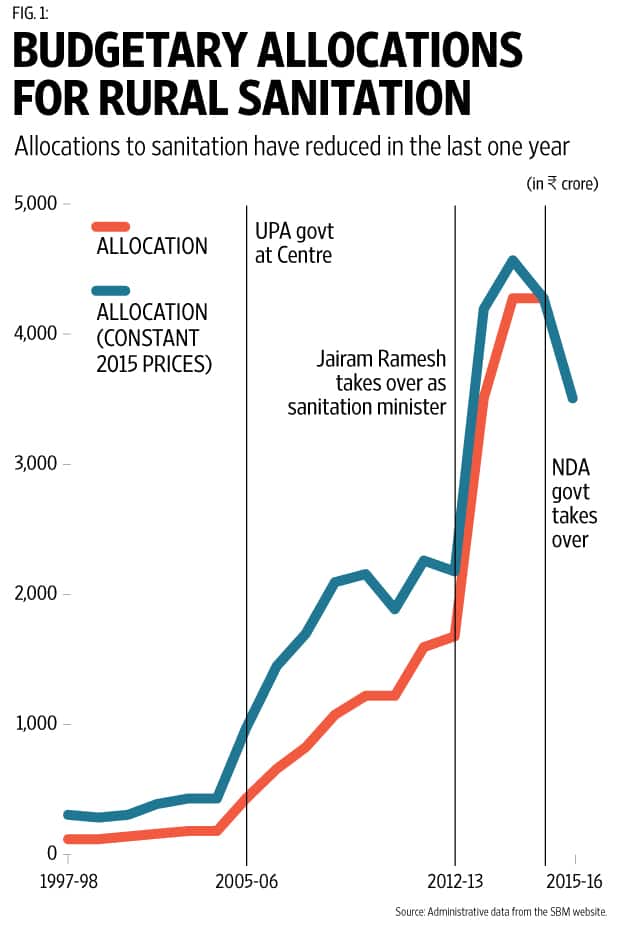 Still, spending on toilet construction increased in the last fiscal year because the government managed to spend a greater proportion of allocated funds. As Chart 2 shows, spending typically picks up around the end of the fiscal year and remains low after that. This monthly spending pattern has not changed under the new government, but a larger proportion of the money allocated for constructing toilets seems to have been spent, unlike in earlier years. 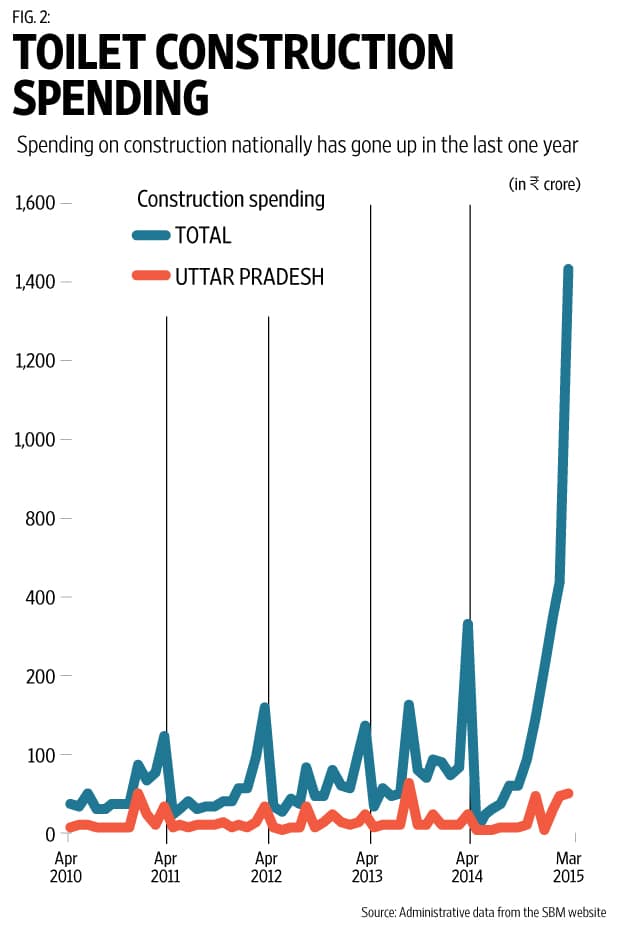 However, in Uttar Pradesh, India’s most populous state and the one with the highest number of open defecators, spending on toilets has not improved. We have included UP in this graph because of its relative importance as well as incompetence: every eighth person in the world who defecates in the open lives in UP.

The improvement in spending allocated funds was driven by only a few states such as Gujarat, Karnataka, Rajasthan and Maharashtra that spent most of the available funds. Toilet construction spending in most large states with a large number of open defecators such as UP, Bihar, Andhra Pradesh and Madhya was much below target. 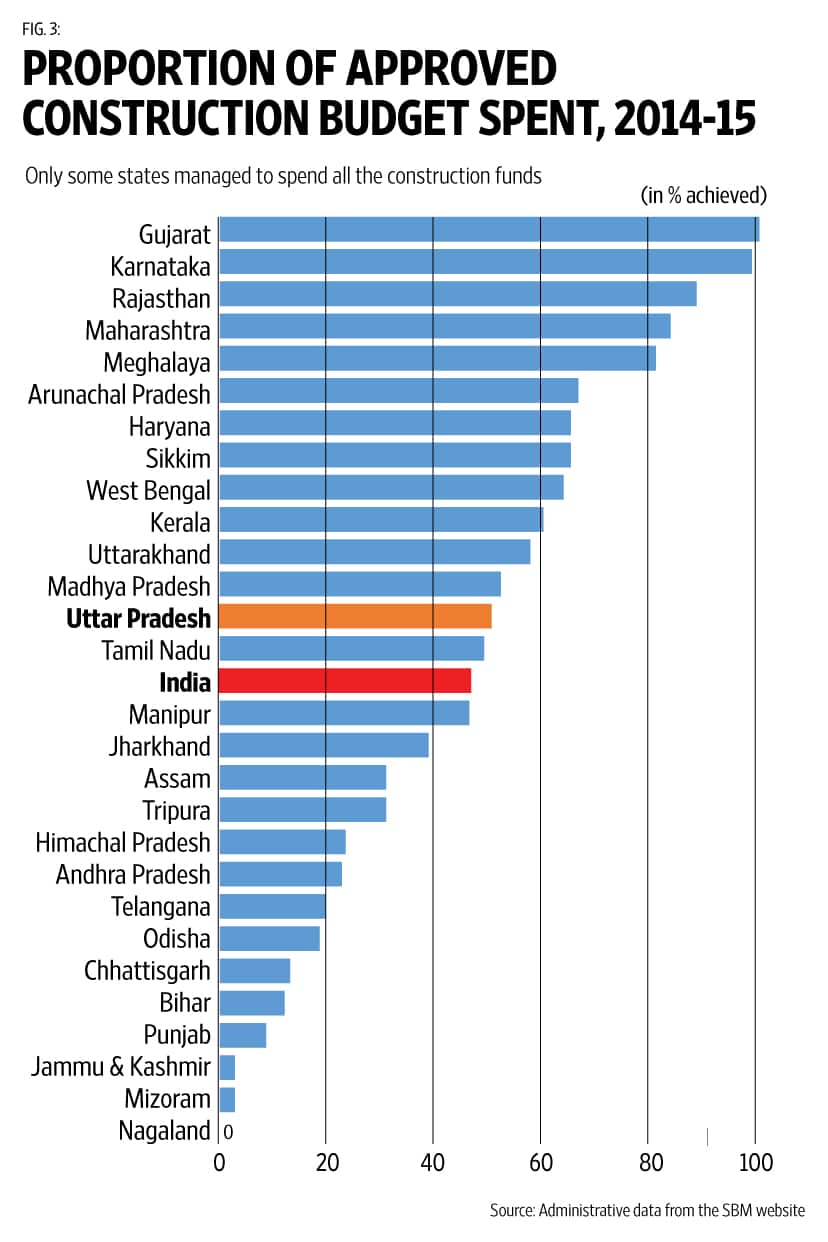 However, as research shows, the government’s concern with construction of toilets would not change much unless sanitation behaviour changes.

Initially, after the Prime Minister’s numerous speeches on toilets, it seemed that the government would initiate a nationwide behaviour change campaign on a war footing. On 2 October, a National Sanitation Awareness Month was also launched. That initial enthusiasm seems to have waned and promoting behaviour change has taken a backseat.

The new sanitation policy now caps the allocation to information, education and communication (IEC), the expenditure head for behaviour change campaign activities, at 8% of total allocation to rural sanitation. These funds have been reduced almost by half.

The spending on IEC mimic the pattern in construction spending with a spike towards the end of the fiscal year. Chart 4 also shows that the highest IEC expenditure was done last year under the United Progressive Alliance government, and not by the present one. IEC activities in UP, where they are needed the most, have been even dismal. The highest the state ever spent on IEC was ₹ 28 crore in March 2011. In the last fiscal year, there were many months when the state spent nothing. 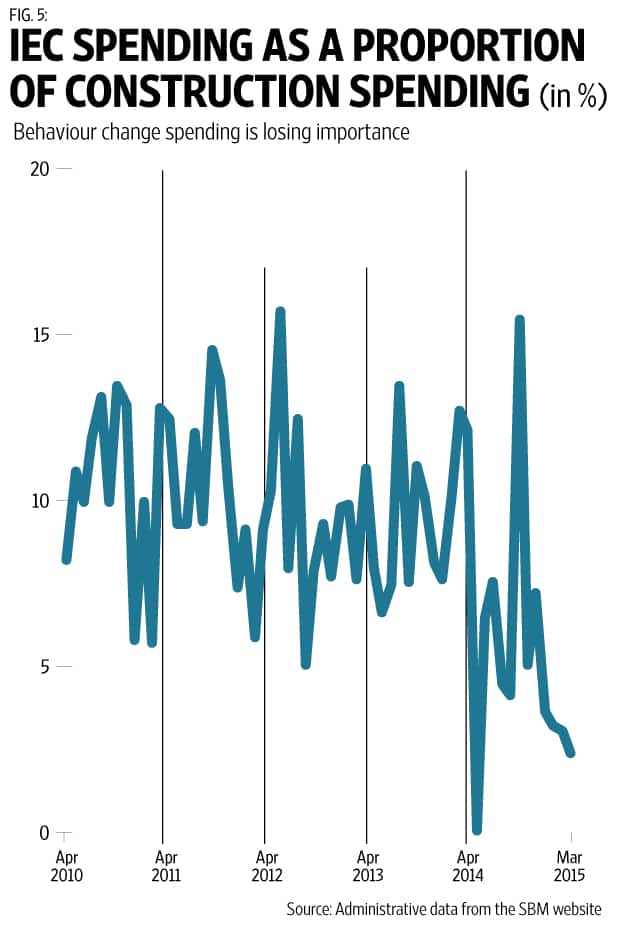 This means that spending on behaviour change per open defecator was very little. In 2014, the state and central governments spent a combined ₹ 157 crore on behaviour change. According to Census 2011, 69.3% of rural households, or 11.6 crore households, did not own a toilet. Toilet ownership in India has been improving very slowly, and is lower than the population growth rate, so it’s safe to assume that there are these many households who would still be without a toilet. A household size of 4.98 persons per household (Census 2011) means at least 57.7 crore people defecate in the open. This implies that the government spent just ₹ 2.72 per person the whole of last fiscal year to convince citizens to use a toilet instead of defecating in the open! 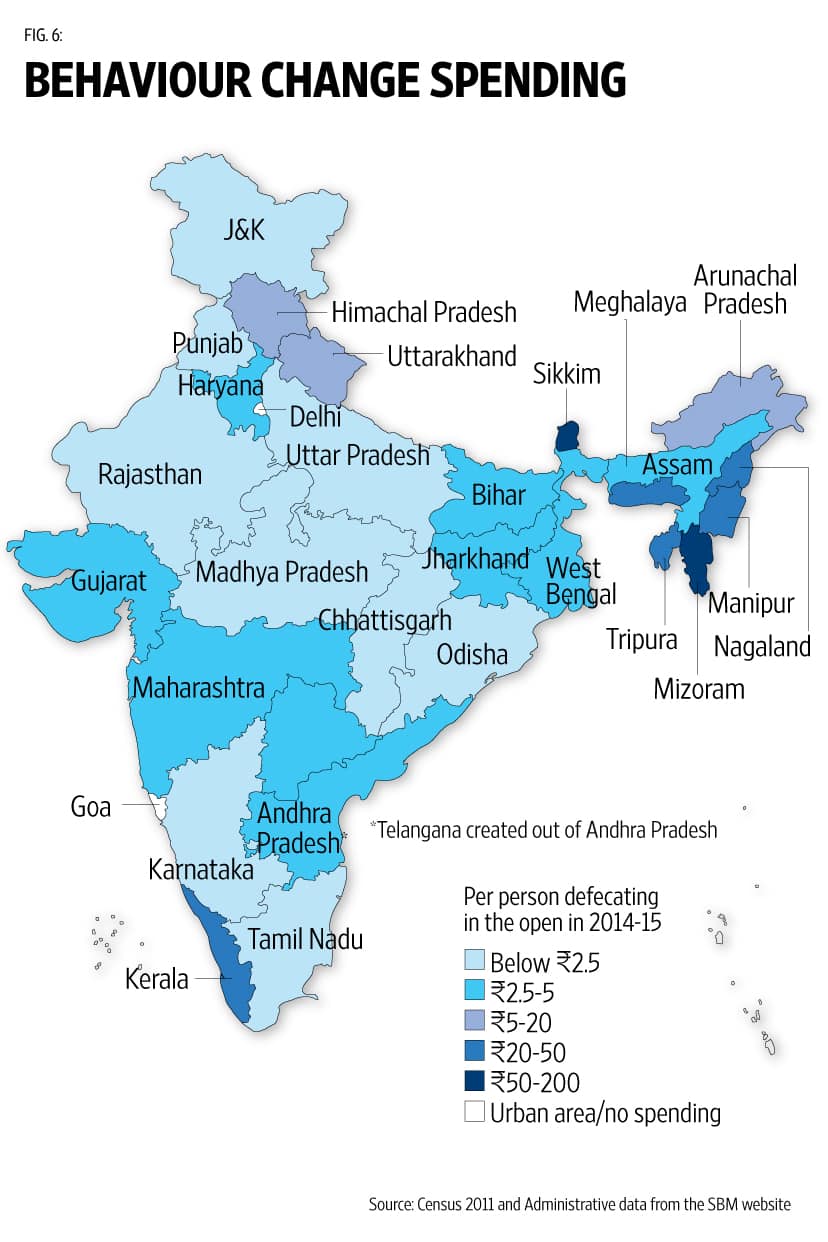 Uttar Pradesh spent ₹ 1.39 the whole year per open defecator while Rajasthan spent ₹ 1.28. In fact, states where open defecation numbers are less, such as Sikkim and Kerala, spent the highest amounts per open defecator. With such little spending on behaviour change, little is likely to change in the near future.

No monitoring of toilet use

In these graphs, you may have noticed that there is little government data available on the use of the toilets constructed. That’s because the government does not collect any such data. Different sample surveys, using different survey questions, have enquired about the use of government toilets from families who got them. The government had even promised to have such a survey in its guidelines but there is no news of such a survey ever since. If it were to happen, such a survey would provide valuable feedback on the government’s efforts to bring about behaviour change, while helping keep district collectors, state governments and program personnel accountable. This is just one of the implications of the construction-driven approach of India’s sanitation programmes: that the use of toilets is not even monitored.

Nikhil Srivastav and Aashish Gupta are researchers with the research institute for compassionate economics (r.i.c.e.)