Will a development record alone be enough to win elections?

There is a popular saying in Bihar that people in the state do not cast their vote, but vote their caste. Lalu Prasad Yadav’s 15-year rule till 2005 was built on the Muslim-Yadav equation. The 2010 elections marked a break in this trend, according to many commentators. In a column after the 2010 Bihar elections, political scientist Milan Vaishnav attributed Nitish Kumar’s (who had then allied with the Bharatiya Janata Party) landslide victory to a clever mix of development and caste issues as an election strategy. The former was completely absent in Yadav’s politics, wrote Vaishnav.

Kumar seems to have maintained his good track record in his second term. Bihar’s performance on many socio-economic indicators after 2005, when Kumar took over, is not only better than its own performance in the previous decade, but also of comparable states or the national average. Among the states we have taken for comparison with Bihar are Madhya Pradesh, Odisha, Rajasthan, Uttar Pradesh and West Bengal.

Bihar’s economic growth has been impressive under Kumar’s tenure. The average annual growth of Bihar’s economic output was the highest among selected states. Its performance in agriculture was second only to Madhya Pradesh.

Writing before the 2010 assembly elections, economist Swaminathan Aiyar attributed the economic turnaround of Bihar to improved law and order situation under Kumar. A look at the National Crime Records Bureau data shows significant reduction in crimes such as dacoity and robbery under Kumar’s tenure.

Another ASSOCHAM study released in 2013 cited public investment as an important growth stimulus to growth in Bihar unlike states such as Gujarat where private investment was the leader.

It must also be noted that Bihar’s high growth can be mainly attributed to the fact that it started on a lower base. Also, as professor of economics at Jawaharlal Nehru University Praveen Jha points out, this data needs to be viewed with caution. In a 2010 article, Jha pointed towards a 38% discrepancy between provisional and advance estimates of agricultural production in the state. That could be owing to the lack of a credible mechanism to estimate agricultural prices or production after the abolition of the Agricultural Price and Marketing Act in 2006.

In a jointly authored article in 2010, professor of economics at Indira Gandhi Institute of Economic Research R. Nagraj pointed out a large discrepancy in estimates of growth by the Central Statistical Organization and Bihar’s state economic survey. While acknowledging the large spurt in construction sector, primarily road construction, after Kumar took over, Nagraj remained skeptical about what he termed as the tail’s ability to wag the dog, the dog being overall economic growth. Nevertheless, Bihar had done impressively on other fronts as well, such as industrial job creation. That is in keeping with the story of a better environment leading to increased economic activity. 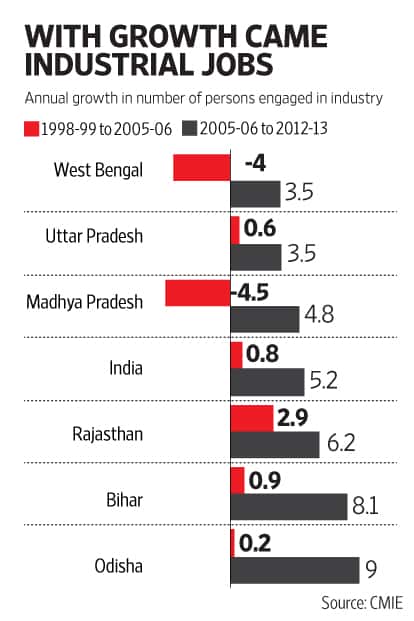 Similarly, an improvement in governance has also meant better-functioning welfare schemes in the state. Economist Jean Dreze has pointed out that Bihar has cut leakages from the public distribution system, which came down from 75-90% during the 2000s to less than 25% in 2011-12.

A combination of political will, empowerment on the ground and institutional reforms like issuing coupons to the beneficiaries which made embezzlement difficult for ration sellers have all helped, said Reetika Khera, assistant professor of economics at IIT Delhi and an associate of Dreze.

Not surprisingly, this has helped significantly in poverty reduction. Bihar has also witnessed the second highest reduction in poverty among these states. 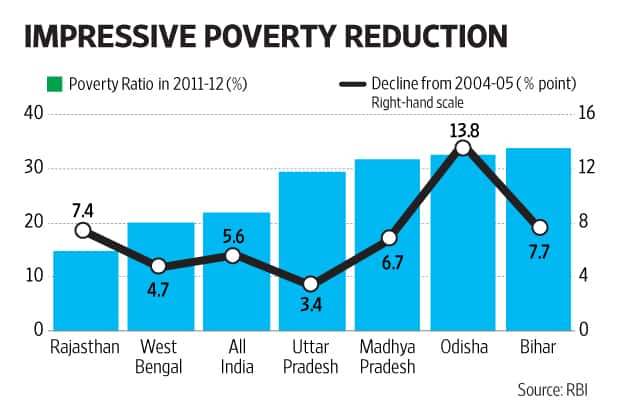 Reviving public health facilities was another of Kumar’s priorities. Although the share of health and education spending as a share of the gross state domestic product came down from 6.3% to 4.7% between 2005-06 and 2013-14, in absolute terms, there was a more than three-fold increase. The spending also appears to have been done more efficiently.

Bihar has managed to bring down infant mortality rates (IMR) at a faster pace than the national average. IMR is the number of dead children under one year per 1,000 live births. Although the state’s IMR is still higher than all-India levels, the gap reduced after Kumar took over. 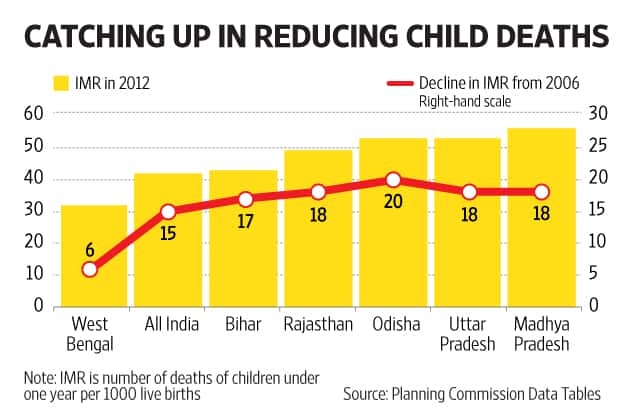 One of the most popular schemes Kumar started was giving bicycles to school-going girls. This and several such efforts seem to have paid dividends in the education sector as Bihar recorded the highest improvement in retention rates among this group of states. Retention rates are defined as a percentage of students who manage to reach grade V after having enrolled in grade I. 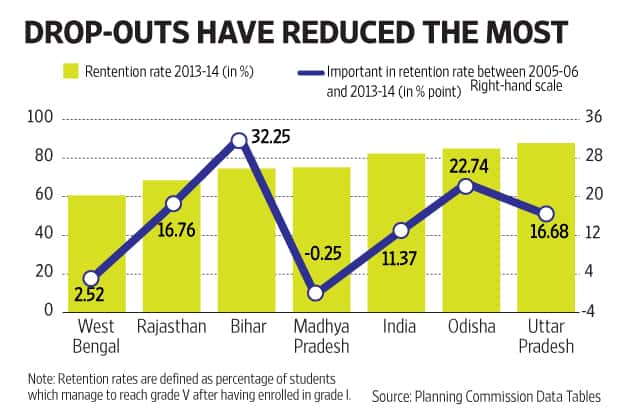 Despite this progress, Bihar remains among the poorest states in terms of per capita income. Its rank in social development is close to the bottom. Still, it is not surprising that Kumar is trying his best to cash in on the sharp improvements during his tenure.

BJP, his main opposition, is also claiming credit for the same. After all, JD(U) and BJP were in an alliance from 2005 to 2013, when Kumar walked out of the National Democratic Alliance (NDA) opposing Narendra Modi’s prime ministerial candidature. The NDA swept the 2014 elections when Kumar and Yadav were not together.

“No party wins elections only on development and Lalu’s track record in governance can be compensated if there is an authentic alliance which helps Nitish with Lalu’s large social base," said Shaibal Gupta, noted economist and member secretary of the Asian Development Research Institute based in Patna.

The BJP, on its part, is trying to forge another coalition, but whether such an alliance would materialize on the ground is another question.