If prophet Moses had a chance to rewrite the ‘Ten Commandments’ today, he would have a plethora of options other than stone tablets --- desktops, notebooks, netbooks and tablet PCs. This flight of fancy apart, everyone is swearing by the success of tablet PCs, with Microsoft Inc. being the latest to join the bandwagon with its own ‘Surface’ tablet.

Internet search leader Google Inc. is rumoured to follow suit with a tablet later this year in a segment that is dominated by Apple Inc’s iPad and Samsung’s Galaxy tablets.

While the pricing of Microsoft’s ‘Surface’ tablet PC is yet to be revealed, what’s interesting is that while most people identify the tablet PC with Apple’s iPad, the term ‘tablet PC’ was made popular by Microsoft way back in 2001 when it announced a product that was defined as a pen-enabled computer conforming to hardware specifications devised by it and running mostly a licensed copy of a “Windows XP Tablet PC Edition".

The software giant, however, was not able to capitalize on its first mover advantage. Analysts attributed the failure to bad timing, high pricing and poor user interface (UI) design. 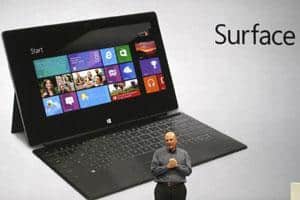 Of course, the rest is history which is why, in all likelihood, Microsoft is taking a shot of getting both the hardware and software from its stable.

Not that hardware is new to Microsoft, primarily known for its software or Windows Operating System (OS) business. The company has its highly popular gaming device--the Xbox360 and Xbox Live--all from the company’s hardware unit set up way back in 1982.

On 13 June, Microsoft’s hardware team posted on its blog that “...throughout our 30 year history, we have been specifically focused on creating hardware that lights up the Windows experience... As we celebrate this pivotal milestone, we find ourselves in an era where touch technology is all around us..."

The team highlighted the company’s Touch Portfolio products including the ‘Touch Mouse’ for PCs, Explorer Touch Mouse, which allow users to navigate both horizontally and vertically with the swipe of a finger, and Arc Touch Mouse, to feature touch scrolling where the flick of a finger starts hyper-fast scrolling, and a simple tap brings it to a stop.

And since a well-integrated device is a delight to consumers, especially if the software does not crash or hang mid-way, Microsoft’s ‘Surface’ tablet PC may see success if it gets its act right like Apple did which sold 15.4 million iPads during the fourth quarter of 2011 alone.

In India, “of all the end user devices (such as PCs, thin clients, laptops, netbooks, smartphones and tablets) currently available, tablets are most conducive for the education vertical," suggests a report by Convergence Catalyst--a research firm. “And, ever since their emergence two years ago, their adoption in this sector has been rapid, both globally and in India," adds the report.

Unfortunately, initiatives in the country--like Aakash, Mobilis and the Simputer--failed to enthuse users. About 250,000 tablets were sold in the country in 2011, of which 70% were accounted for by iPads, Samsung devices and Research in Motion Ltd’s BlackBerry PlayBook, according to IDC Centre for Consultancy and Research.

Microsoft’s new tablet PC and hardware push notwithstanding, there’s much to be analyzed about technology companies that is beneath the surface.

Consider this. While Microsoft is giving its hardware business a push, the $100 billion International Business Machines Corp. (IBM), which sold its personal computing (desktops and laptops) business to China-based Lenovo in 2004, is sharpening its focus on enterprise software even as global revenue from hardware declines.

The worldwide enterprise software market showed broad growth and recovery in 2010 with total software revenue increasing 8.5% annually to a worldwide market size of $245 billion, according to research firm Gartner Inc.

Other companies like Hewlett-Packard Development Co. LP and Oracle Inc. are focusing on services, and so is Dell Inc. that was synonymous with hardware and the poster boy for hardware supply chain best practices.

And who could have imagined a decade ago that a Google Inc. or Amazon.com Inc. would compete with Indian and multinational information technology (IT) service providers in the outsourcing space.

But with the help of cloud computing—also known as a non-linear or non-headcount-related technology—companies such as Google, Amazon Web Services, Hewlett-Packard Development Co. LP, Microsoft Corp. and Salesforce.com Inc. are threatening traditional IT outsourcing (ITO) models by increasingly hosting the IT infrastructure of large enterprises and especially small- and medium-size businesses in their own data centres, and reducing the IT costs of their clients by at least 40%.

Cloud computing, which comprises three broad service delivery models, is just one non-linear or non-headcount related technology that is disrupting traditional IT outsourcing with a pay-per-use or subscription model. The three delivery models are infrastructure-as-a-service, software-as-a-service (SaaS) and platform-as-a-service.

Other non-headcount related initiatives include automation, offering templates to industry verticals that can be reused with minimal customization, reusing assets and codes, offering platform solutions and tools, besides value-added services such as analytics and intellectual property. These new technologies, coupled with the popularity of social media tools and the use of personal mobile devices in enterprises (the bring-your-own-device trend), are giving rise to new models.

The Nasscom Strategic Review 2012 report released in February acknowledged that changing technology—such as automation and cannibalization of existing services due to new technologies (such as SaaS replacing production support)—presents a potent risk. It predicts that the future of the technology services industry will lie in a combination of services, solutions and platforms. For instance, it forecasts public cloud services spending to outpace growth of overall IT spending by about four times between 2012 and 2015.

And the technology treadmill moves rapidly.

While Google forced Microsoft to go Live (read concentrate on the online world) and social media, Facebook Inc.--which has over 900 million users--has become the world’s largest social networking site right under the nose of Google which had its own Orkut. It’s also rumoured to be working on a smartphone. And this is not the last that the tech world has seen.