Heath Ledger is the most convincing Joker ever

Heath Ledger is the most convincing Joker ever

I know that Lounge has already devoted an entire issue to the new Batman movie (The Dark Knight). So forgive me for going over some of the same territory again. My defence is that I’m not writing about Batman but about his most famous enemy: The Joker. Of course you know who The Joker is. The hype surrounding the release of The Dark Knight has focused less on Christian Bale, the British actor who makes an excellent Batman and more on Heath Ledger’s portrayal of The Joker. Partly, this is because Ledger died some months before the film was released. His sudden demise in dramatic circumstances led to a long and tedious debate about the ethics of using his likeness in the movie’s publicity campaign. 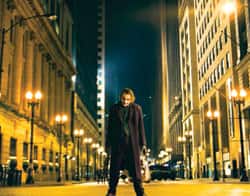 Dark Knight: Fans say Ledger may be the second actor to get an Oscar posthumously. Photograph: Warner Bros/NYT

But even before The Dark Knight, The Joker was hot property. The publicity campaign for the first of the Tim Burton Batman movies, released way back in 1989, ignored Michael Keaton (who made a so-so Batman) and concentrated on Jack Nicholson’s Joker. Of course, Nicholson was a far bigger star than Keaton but he also effortlessly stole the movie.

If you are as old as I am, then your memories of The Joker will go even further back in time. There was the Batman TV show (which ran from 1966 to 1968 but is still repeated) in which veteran Latin seducer Cesar Romero made a very bad Joker (the old rogue refused to shave off his moustache so they had to smear the white Joker make-up over it). There was the movie version of the show (also featuring Romero’s Joker) and there were rumours to the effect that Frank Sinatra had wanted to play The Joker.

And if you are a fan of comics/graphic novels—which I guess many of you are, given that Lounge features such an excellent column devoted to the genre—then you’ll know the original Joker, the guy who fought Batman in the comic books.

What makes The Joker so special that he is regarded as Batman’s No. 1 enemy, that Sinatra and Nicholson wanted to play him, and that Ledger will probably get an Oscar nomination for his portrayal?

My guess is that it is the relative credibility of the character. Of course, when you talk about Batman, the word “credibility" seems strangely inappropriate (a man who dresses up as a bat? That’s real?). Part of the problem with comic book heroes is that you can’t have them fighting normal criminals. Do we really need Batman (or Superman or Spiderman, for that matter) to foil a bank robbery, to catch a smuggler or arrest a murderer? These are things that normal people—policemen, detectives, etc—can easily do.

A superhero needs a super-villain, somebody who is his equal, if the story is to have any dramatic balance. So Spiderman fights the Green Goblin; Superman has General Zod. And Batman fights people in costumes (Catwoman, The Riddler etc.) or with special powers (Mr Freeze, Poison Ivy etc.)

Once you enter the realm of super-fantasy, of men and women in tights beating each other up, it becomes difficult to imagine the action as occurring in the real world. Jim Carrey’s Riddler was ridiculous. Tommy Lee Jones’ Two Face was a joke. And when Danny DeVito tried to make the Penguin seem darker, he made him too repulsive for us to care.

Originally, The Joker was a mere cartoon character. He first appeared in 1940 with crimson lips, green hair and a purple suit. As time went on, he got even more cartoonish, telling silly jokes, wanting to be regarded as the world’s greatest comedian, driving a Jokermobile (like the Batmobile) etc.

It wasn’t till 11 years later that the comic book explained his origin: He was a crooked lab worker who had fallen into a vat of chemical waste while robbing a playing card company. This explained both, his complexion and, why he called himself The Joker.

Of course this explanation was totally unrealistic. Who gets white skin and a silly grin from falling into chemical waste? But it was in keeping with the tone of the comic books of that era.

The conventional wisdom is that Batman was reinvented in 1986 by British writer Frank Miller who wrote a story set in the future called The Dark Knight Returns. But almost as influential was Miller’s Batman: Year One series dealing with the character’s origins which also came out in 1986. Miller’s conception of Batman as a lonely, driven figure who appears only at night became the basis for Tim Burton’s 1989 Batman movie.

The Joker, however, was really reinvented by two other British writers. Alan Moore made him a psychopath in The Killing Joke, a theme further developed by Grant Morrison in Arkham Asylum in 1989. This version differed substantially from Miller’s —his Joker was gay and called Batman “darling". The Nicholson portrayal preserved the traditional vat-of-chemicals origin but emphasized the lunatic nature of The Joker’s criminality.

Now, in The Dark Knight, Ledger has given us our most convincing Joker yet. He is not a cartoon in a costume. He is a psychotic murderer whose madness makes him act randomly. The funny skin colour does not come from a chemical accident. It is make-up, the sort of war paint that a psychopath might wear before a massacre. The motivation for Ledger’s Joker is not criminal greed. He wants to fight Batman because in his mad way, he enjoys it so much. More than any other Batman villain, The Joker seems like a real person.

My concern now is with the proposed third Batman movie (of the Christian Bale series). In the first one, they dealt with Batman’s origin. In the second, they made him fight a psychopath. But what will they do for a plot in the third?

If Batman goes back to fighting costumed, cartoon villains then, that’s it for the credibility and tone of the series. Sadly for all fans of the series, both Heath Ledger and The Joker are now dead.