The big problem of agricultural loans

The big problem of agricultural loans

The Reserve Bank of India (RBI) has put the biggest four foreign banks on a sticky wicket with a new policy— foreign banks with 20 branches or more face the same Priority Sector Lending (PSL) requirements as domestic banks. Citibank, Standard Chartered, HSBC and RBS must soon direct 18% of their loans to agriculture, from zero today. That will be a steep challenge, but they will not be alone. Agriculture PSL has been a problem for the entire banking sector that is only getting worse. 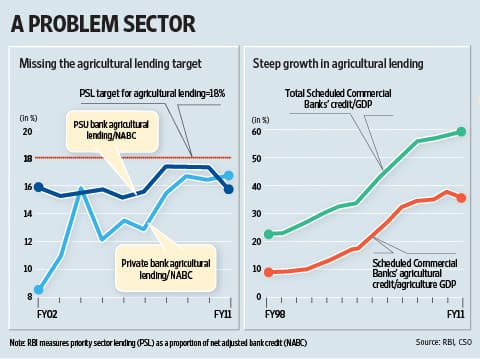 The shortfall must go in what bankers refer to as “penalty deposits" at the National Bank for Agriculture and Rural Development (NABARD), earning between 7.5% and 2.5% depending on how badly the bank missed the target. Why do so many banks resort to penalty deposits rather than lend more to agriculture? This is because additional viable borrowers in agriculture have been very hard to find.

Bank credit in developing countries typically expands faster than gross domestic product (GDP) as financial deepening occurs, which is true in India. And India’s overall GDP has grown faster than the agriculture segment over the past ten years. This drives bank agriculture lending to grow much faster than underlying agriculture GDP, making targets harder to meet.

Lending to agriculture has settled at about 36% of agricultural GDP in recent years. It is difficult to say what is a good credit/GDP ratio for agriculture in the long run. India needs further financial deepening and financial inclusion, especially in rural areas. Other sectors such as utilities have higher ratios, though they tend to be more capital intensive.

The trend finally cooled off in 2007-08 as over-indebted farmers became a national concern. On top of many individual tragedies, over-indebtedness spawned the farm loan waiver programme, which dealt a lasting blow to the loan repayment culture of farmers. As far back as 1998, the M. Narasimham Committee (II) noted that 44% of non-performing loans (NPLs) originated from PSL. In 2010-11 that figure was a staggering 73%. Now agriculture alone generates 44% of NPLs.

In this context, the idea of foreign banks forging into agricultural lending with no underwriting experience and largely urban branches is a bank regulator’s nightmare. But foreign banks will not likely complain excessively, because equalizing PSL requirements eliminates the major argument against giving them equal rights to expand their branches.

A better solution—for all banks —would be to allow tradable permits in PSL loans. Tradable permits would allow the banks that are best at agricultural lending to profit from their specific skill and networks. Other banks could improve efficiency by relying on specialists when they exhaust their own supply of viable agricultural clients, rather than making risky loans.

Tradable permits have been mooted before and gained some support inside RBI, but lobbies within the banking industry shot them down. The benefit fell too much on newer urban-focused banks. That differential could be offset by a fee to buy permits, collected by the regulator and distributed pro rata to banks that exceed their target. By providing a bonus to banks that exceed the target and some penalty to those who don’t meet it, this structure incentivizes both issuers and buyers to maintain their in-house agricultural lending capacity.

A tradable PSL permit system would improve the quality and efficiency of agriculture lending, but still leave the credit surge problem. The link to aggregate lending could be severed if RBI or the Union finance ministry simply set an overall agricultural lending target annually and, similar to the current system, divided it among banks in proportion to their total lending.

If based on a sophisticated forecast of the sector’s borrowing needs and capacity, this proposal could give agriculture enough credit to promote healthy development. Alternatively, it could give the government another lever to tweak a sector already mangled by government interference. Compared to the status quo’s arbitrary and often inappropriate credit flow, there is room for improvement.

The basic PSL structure harkens back to the early 1970s. Banking has changed dramatically since then. Less dramatically, so has agriculture. Why not PSL?

Russell A Green is the Will Clayton Fellow in International Economics at Rice University’s Baker Institute for Public Policy. He served as the US Treasury Department’s first financial attaché in India.