So everyone is saying the economy has slowed down. No problem, it will bounce back. The Reserve Bank of India (RBI) says growth in gross value added will be 7.4% in 2017-18, lower than the 7.8% notched up in 2015-16, according to the revised estimates. Well, that’s not much of a fall, no reason to worry. That’s what the market is saying.

True, the Indian economy has benefited handsomely from the fall in crude oil and commodity prices in the last couple of years and now that they’re firming up again, that boost to growth will be lost. And yes, that could very well start crimping margins of companies and hit earnings. But look on the bright side, demand may pick up, which means sales will be higher and that could offset the lower margins. Just wait and see, 2017-18 will be better. Brokerage research reports have been predicting better times ahead every year, but this time it’s for real.

Narendra Modi: The man who would purify India

To be sure, banks are still saddled with very high levels of bad debts and bankers still can’t say for sure that the worst is behind them. True, credit growth is very dismal and some banks don’t have the capital to fund loan growth when the economy picks up steam, which means they need to be recapitalized urgently. But wait a couple of quarters, the banks are going to get better. 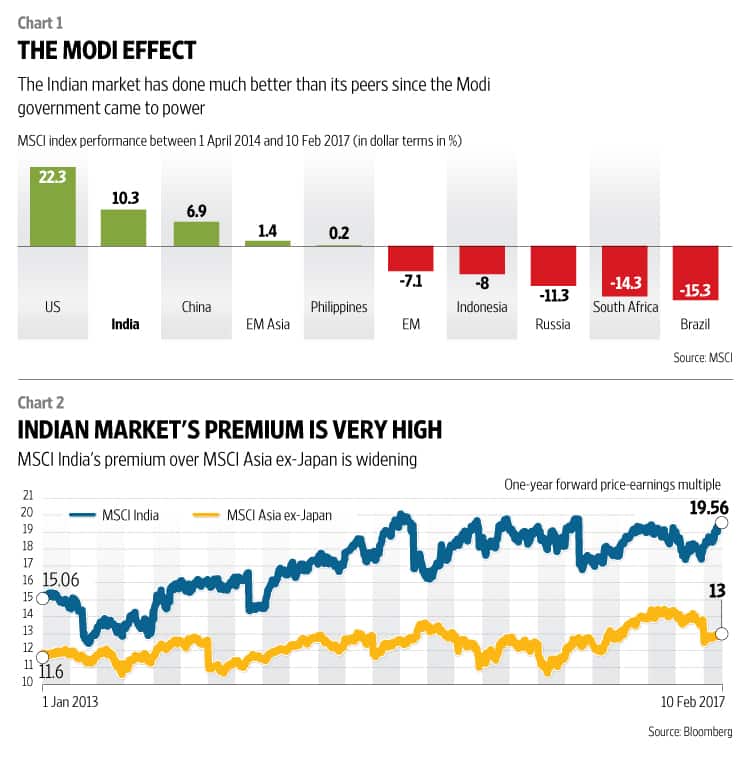 Yes, yes, we all know and are tired of hearing that investment demand is down in the dumps and shows no sign of picking up. True, the budget hasn’t really given a boost to capex or to growth. But why knock the budget, at least it’s conservative and has earned a lot of praise from the rating agencies. And consumption demand is sure to rebound from the temporary slump caused by demonetisation.

Of course, Donald Trump may very well do what he has always said and erect high protectionist barriers in the US, which could make life difficult for Indian IT companies, apart from others. Yes, of course it’s weird that RBI still doesn’t know or isn’t telling how much of the demonetised notes has come back to the banks. Sure, so far the pain from demonetisation has far outweighed any gains and we’re not sure whether there will be any gains. Yes, it’s very possible that the informal sector has been hard hit by demonetisation and will take time to recover and we really don’t know whether the goods and services tax (GST), when it is implemented, will affect the informal sector adversely, which might affect consumption demand in the economy. And we don’t know if GST will have an adverse effect on small businesses—some broker reports say there’ll be short-term pain from GST before the long-term benefits start trickling in.

How much has demonetisation affected the stock market?

True, RBI said, rather pointedly the other day, that the interest rate cycle has bottomed out, which wasn’t what folks were expecting and led to a lot of head-shaking and tut-tutting among corporate lobby groups. Yes, the Index of Industrial Production for December 2016 fell by 0.4% from a year ago and has grown only marginally this fiscal year. And jobs? Sure, jobs are scarce, especially jobs for the masses, but who’s bothered about that?

The point is all this doom and gloom is simply unwarranted. Look at the markets, they’re supposed to be forward-looking, right? All you have to do is listen to what they’re saying. If they are right, things are going to get better soon.

Let’s look at the performance of the Indian market over the longer term. Sure, the Sensex is still below the highs it reached in March 2015, but we need to see how the Indian market has done compared with others.

Let’s start the comparison from 1 April 2014, which is about the time the markets realized Modi was going to win the elections. Between 1 April 2014 and 10 Feb 2017, the MSCI India index went up 10.3% in dollar terms. That might not look all that great. But that number glows brightly when you compare it with some of our peers—MSCI Indonesia: minus 8%; MSCI Philippines: 0.2%; MSCI China: 6.9%; or MSCI Thailand: 1.2%. We beat MSCI Emerging Markets Asia, which is up a mere 1.4% over the period and the MSCI Emerging Markets index, down 7.1%. Among BRICS, MSCI Brazil, Russia and South Africa are all lower now in dollar terms than they were on 1 April 2014.

Compared with our peers, therefore, the Indian market has done exceedingly well. The economy may be a bit sluggish but demonetization has been shrugged off, as have low corporate earnings and bank bad loan problems. The markets’ faith in Modi is undiminished. That is clearly shown by chart 2, which maps the one-year forward price-earnings multiple for MSCI India and MSCI Asia ex-Japan. As the chart shows, MSCI India’s premium valuations over its peers continue to be very high.

The reason, of course, is simple. True, our economy may have all kinds of problems and demonetisation has exacerbated them. Even then, our rates of growth are better than those of our peers. Our problems pale compared with those of China and most other countries. And then, of course, the markets seem to have full faith in Modi’s abilities to deliver long-term growth.

We’ll know soon enough whether that faith is shared by the voters in Uttar Pradesh.