No Make in India impact visible yet in exports

That has not happened so far. In fact, things are moving in reverse gear. Manufacturing exports contracted in 2015-16 for the first time in six years.

The situation appears more worrisome than in 2009-10, when the decline in exports could be almost entirely blamed on lower global growth and fall in global trade volumes. Why has this happened?

True, global growth, while not as bad as in 2009, has also not really taken off despite years of monetary policy stimulus by all big central banks. Stagnant growth is showing some effect on global trade volumes. But unlike in 2009-10, global trade volumes have not contracted, while India’s manufacturing exports have. Thus, the entire blame for India’s manufacturing export performance can’t be laid on global conditions.

Another reason for the slump could, surprisingly, be the rupee. While the rupee has fallen significantly against the US dollar, it has strengthened against a number of India’s trading partners in the last fiscal year, when adjusted for inflation. Thus, the 36-country real effective exchange rate (REER) rose last year which would have weighed on exports. 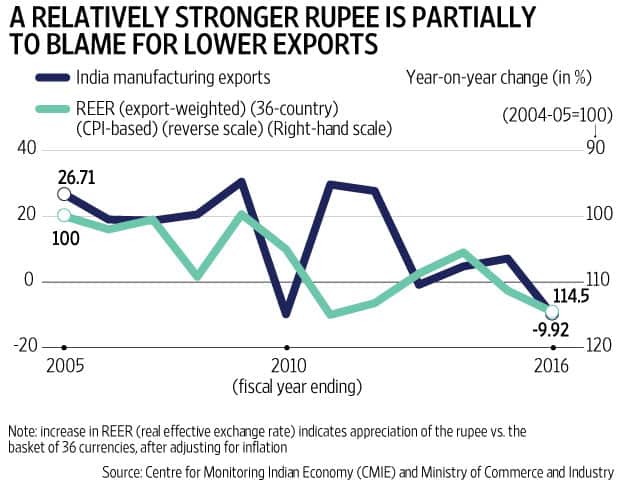 The fall in commodity prices, which weighed on commodity exports, have also had a role to play, said Upasna Bharadwaj, an economist with Kotak Mahindra Bank Ltd. The commodity prices meltdown resulted in lower domestic prices for inputs that translated to a decline in prices of manufactured goods. So, there was a price effect at play too.

The big picture remains a matter of concern

Nevertheless, the fact remains that the decline in manufacturing exports has been broad-based across various technology-intensities of manufacturing. That remains a matter of concern. In any case, when it comes to exports that require medium to high level of technology (for example, chemicals or power generating equipment), India has never been competitive in the global market. In other words, India’s exports continue to be dominated by low value-add items. More than half of the value of exports in 2015-16 (April to February) simply constituted either commodities or processed natural resources.

Only a tenth of India’s merchandise exports were high-technology manufactured products. This remains a matter of concern because it is generally the progress in technology-driven sectors of the economy that guarantees higher income growth. This is because productivity growth in such sectors is generally higher, as the Economic Survey of 2014-15 too noted. Falling manufacturing exports also means that any growth in India’s manufacturing output would need to find domestic demand to sustain itself. That appears a bit challenging at this point in time.

The latest manufacturing PMI for the month of April fell to a four-month low of 50.5 in April from 52.4 in March, and a note by Nomura economists Sonal Verma and Neha Saraf attributed the fall to weaker domestic orders.

Other macroeconomic data also reinforce the concern that in the absence of export momentum, the Make in India campaign is likely to face serious headwinds.

Latest data show that India’s industrial production growth slowed to 2.4% in financial year 2015-16 from 2.8% growth in the previous fiscal year. Within industrial output, manufacturing showed an even lower rate of growth for the year and the manufacturing index was actually negative for the month of March.