Everyone’s a winner (almost) in India stocks this year

Among offshore funds that primarily invest in India, the top 30 have produced average returns of almost 25% so far in 2017, matching the surge in the Nifty 50 index

Singapore: There’s something about the Indian stock market this year that’s turning the serious business of managing money into a kindergarten spoon race: Everybody is a winner.

Well, almost everybody. Among offshore funds that primarily invest in India, the top 30, which between them account for $40 billion in assets, have produced average returns of almost 25% so far in 2017, matching the surge in the Nifty 50 index. The top-performing Morgan Stanley India Investment Fund has chalked up gains of 32%. 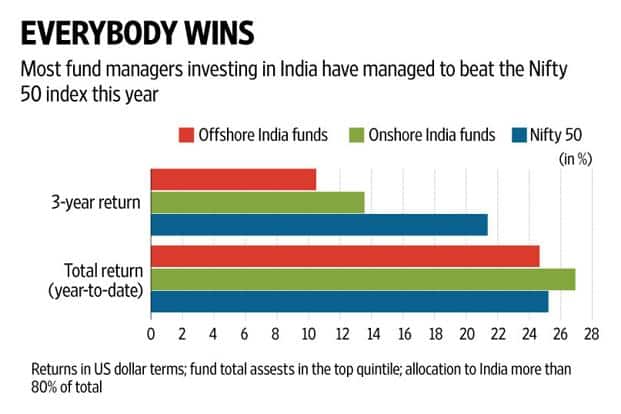 Local money managers are doing even better. Taking, once again, the top quintile of mutual funds by assets ($75 billion, spread over 109 funds), the average performance this year is 27% in dollar terms, with ICICI Prudential Banking and Financial Services Fund returning 42%.

It’s not exactly the global tech mania. A couple of US exchange-traded funds that seek to achieve three times the performance of the Philadelphia Semiconductors Index or the Nasdaq-100 Index are up 75% year to date. Leveraged ETFs on South Korean stocks have also returned 50%.

Still, the India fund industry is doubtlessly having a wonderful 2017.

In early March, the stock-market rally in Mumbai had few friends. Maybe it was the confusion caused by the Indian government’s shock November demonetization. Or perhaps investors were just nervous about the bad-debt malaise in India’s banking system. In any case, they hesitated to join in the rally in financials.

Even now, many fund managers are sceptical. Jinesh Gopani, whose Axis Long Term Equity Fund is up 27% in dollar terms, told Bloomberg News that he doesn’t expect earnings to revive before March next year. That’s a long wait for investors who haven’t seen any profit uptick for four years. But prices show no sign of jitters. Take the Nifty contract that trades in Singapore. The volatility implied by option prices on this benchmark is now more than 2 standard deviations below its three-year average.

It’s hard to argue against $60 billion of excess liquidity in the banking system. Besides, Indian equities have attracted $7.8 billion in foreign money so far in 2017, already exceeding last year’s peak.

Korea and Taiwan have witnessed bigger inflows, but that’s because of tech. Meanwhile, India’s export-driven software and pharma industries are in the doldrums. It’s domestic demand—including a potential housing boom that CLSA India Pvt. says could be as large as $1.3 trillion over the next seven years —that has captured investors’ imagination.

The other hope is from a nationwide goods and services tax that will start in July. If that doesn’t lead to an inflation scare, the central bank may be emboldened to cut interest rates.

Fund managers are keeping their fingers crossed. If the second half of the year is as good as the first, they might all go home with shiny prizes. Without having to run too hard for alpha. Bloomberg