Views | The madness of queen Mamata

Views | The madness of queen Mamata

If the people of West Bengal wanted change after 34 years of Left Front reign, they’ve certainly got it. The question is: Is this the change they wanted? Or even imagined in their wildest dreams? 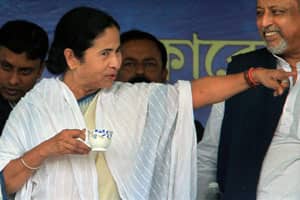 If it was not tragic, one could find some irony in the fact that in 1993, Banerjee had staged a dharna in front of the chief minister’s chamber in Writers’ Building, the seat of the state government, with a hearing and speech-impaired girl, who had been raped and was pregnant. She was violently thrown out, and vowed never to enter Writers’ Building again, as long as the Left was in power. She kept her promise, returning only when she became chief minister, 18 years later.

Does Mamata remember? One does not know, because her behaviour as CM has ranged from sheer paranoia to the undoubtedly bizarre. At the Kolkata Book Fair, recently, quite out of the blue, she compared books to wives (“gharer bou"), saying that neither should be lent out since they will be used before they are returned.

Harried by news of newborns dying in state hospitals—the number has crossed 50 in the last eight months—she came up with two priceless responses. One, that the baby death reports were rumours. And two—and this sounds so downright demented that I find it hard to believe she actually said this—that the babies were conceived during the Left Front rule.

When farmers commit suicide, Mamata Banerjee is clear that one, it’s not due to indebtedness, and two, even if there is any economic reason behind the suicides, Left Front policies are to blame. She has always blamed the Maoists for derailing the Gyaneshwari Express in 2010, leading to 149 deaths. But on Sunday, she suddenly decided that it was the CPI(M) which had been responsible, just to discredit her—she was then Union railways minister.

The Left Front, in its three-and-a-half decades of misrule, ruined West Bengal’s economy, ran an extortion Raj all over the state, and ruthlessly used cadre violence to intimidate political opposition. It will be years before the state can shake off the effects of the Front’s incredibly callous misrule. But blaming the Left for everything from mass murder to poor weather is not going to help.

The state needs investments. A video of Banerjee addressing industrialists and potential investors has become widely popular on YouTube and generated more belly-laughs than any three-hour Seinfeld marathon. She hunts down industrialists in the audience: “Mr Agarwal? Where is Mr Agarwal?" Mr Agarwal stands up, grinning obsequiously, embarrassed beyond words. “So, is your project happening?" Mr Agarwal, all thirty-two teeth on pathetic display, nods. “Good, good," says the chief minister. “Are my friends from Japan here?" Camera focuses on an unfortunate Japanese diplomat, face trying to register disbelief, politeness and a silent prayer for the earth to open up beneath his feet, all at the same time. “Will you invest?" in a hectoring tone. Yes, yes, the poor Nipponese nods vigorously. I’d give a thousand bucks to know the thoughts going on in the man’s head at that point. “My friends from China, where are they?" she squints into the audience. The friends from China have been smart, they’ve given the occasion a miss.

Meanwhile, Rabindrasangeet plays at traffic lights. All schools were closed for two days—yes, not one, but two—to celebrate Tagore’s death anniversary. The innocent water tanks in Kolkata’s upper-middle-class Salt Lake—bus stops are named after the tanks, which have been used by residents for the last 40 years as landmarks to guide visitors—have all been rechristened: they are now Rabindranath tank, Khudiram Bose tank, Uttam Kumar tank, and so on. And last week, scaling some new height of pure unhinged-ness, Banerjee decreed that Kolkata’s flyovers, park railings and official buildings should all be painted blue.

AFP reports: “Party insiders said blue was the favourite colour of the chief minister…and was also suggested in a new slogan for her government…’The sky is the limit’…Some police stations in Kolkata’s suburbs, painted red since the days of the British Raj, have already received a fresh blue coat, while traffic signals, street signs and even streetside tree trunks are also in line for a makeover…City authorities are also planning to give tax breaks to private property owners who volunteer to embrace the new colour code... public vehicles including the city’s fleet of 35,000 yellow taxis would also be part of the new colour scheme. ‘We have plans to get private buses and taxis in the city painted in blue with a white border,’ Mr (Madan) Mitra, (West Bengal transport minister) said." Yes, that’s the same man who thinks women who have had a bad marriage and two children should not be visiting night clubs.

Does the word “phantasmagoric" come to mind? Any budding magic realist author looking for some subversive inspiration should immediately move to Kolkata. It’s all happening there!