By signing an agreement with the Adani Group, Gujarat’s best known industrial conglomerate headed by 52-year-old Gautam Adani who is known for his proximity to Prime Minister Narendra Modi, for a $1 billion loan to build a $7.8 billion coal mine in Australia, the nation’s largest lender State Bank of India (SBI) finds itself in the eye of a political storm.

The loan, one of the largest given by an Indian bank for an overseas project, was announced last month when Adani was in Brisbane as part of a business delegation for the G20 summit, attended by Modi. The opposition has dubbed this as yet another instance of the crony capitalism that has plagued the banking industry, which is piling up bad debts. They say the decision was influenced by Modi, who till May was Gujarat’s chief minister.

Is this really so?

Many are concerned as political influence on loan decisions taken by India’s state-owned banks, in which the government holds the majority stake, is not entirely unheard of. One such example, many believe, is banks’ massive exposure to Kingfisher Airlines Ltd, led by liquor baron Vijay Mallya, who is currently serving his second term as a member of Rajya Sabha, the Upper House of Parliament. SBI, the leader of a consortium of banks, with the maximum exposure of ₹ 1,600 crore to the grounded airline, is fighting 23 cases in various courts to recover the money.

This is not the first time that SBI is giving money to Adani. It has ₹ 15,402 crore funded exposure to the Adani Group and ₹ 4,327 crore non-funded exposure, taking the total exposure to ₹ 19,729 crore, the most among all Indian banks, and nearly 21% of the entire banking industry’s exposure to the group ( ₹ 96,150 crore). The bank’s biggest exposure is to the power business of the group (around ₹ 11,500 crore), followed by the port ( ₹ 5,250 crore) and other trading activities. It has loaned over ₹ 3,800 crore to Adani Power Maharashtra Ltd and around ₹ 3,600 crore to Adani Power Rajasthan Ltd. Its lowest exposure is to Adani Welspun Exploration Ltd ( ₹ 67 crore).

SBI can justify its decision to lend so much to this group, as barring Adani Global Pte Ltd in Singapore, which is unrated, all group firms to which the bank has loaned money enjoy investment grade rating—BBB- and above—and none of them has delayed or defaulted on repayments.

The banking community in India, however, has some concerns about one group company—Adani Power Ltd that runs a so-called ultra-mega power project—because of the rise in cost of coal. A rise in the price of coal to be imported from Indonesia, coupled with the fall in local currency against the dollar last year, led to the escalation of its operational cost. The Central Electricity Regulatory Commission has agreed to hike the power tariff for the company to take care of the rise in costs, but the new rates have not yet been implemented as some of the state distribution firms have appealed this decision. 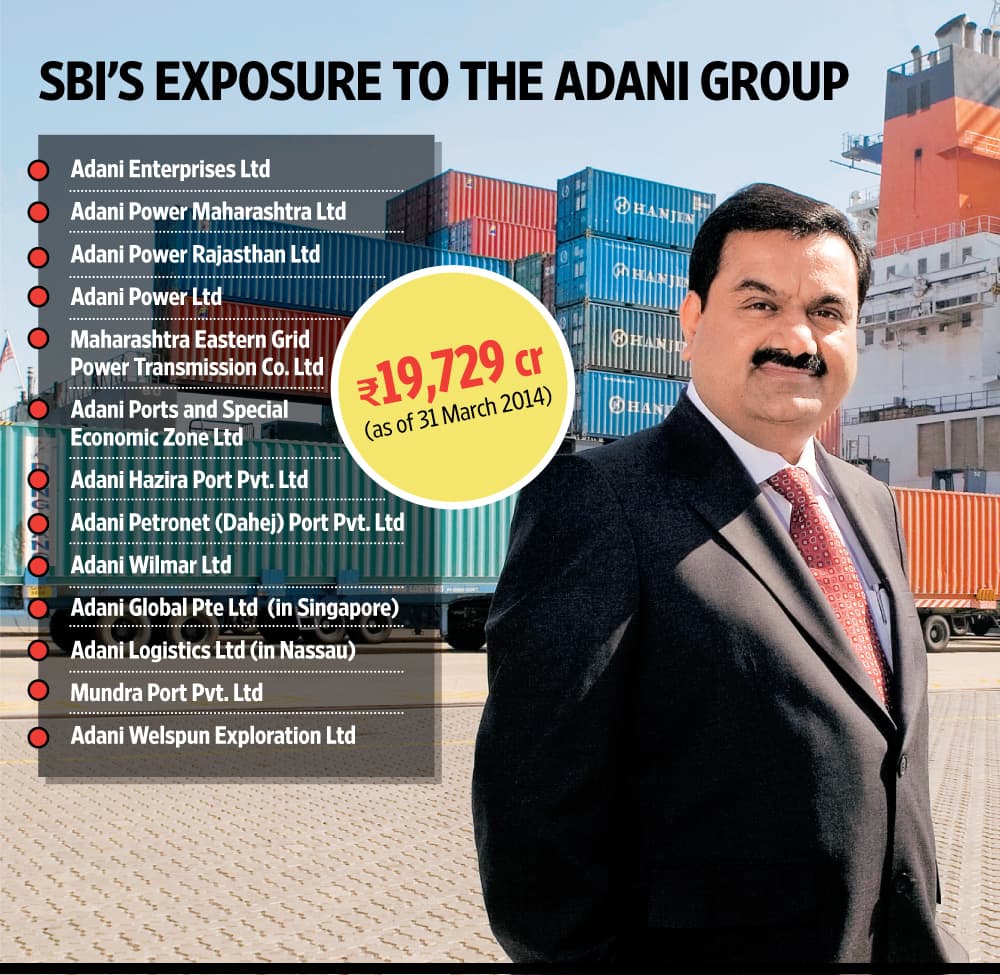 SBI’s exposure to the Ahmedabad-based infrastructure group, set up in 1988, dates back to more than a decade. The last time it sanctioned a loan to the group was in June 2011 when the Congress-led United Progressive Alliance was ruling India. The amount loaned was $800 million, for seven years. It gave the loan to partially fund the purchase of a 50 million tonnes per annum (mtpa) coal terminal at Abbot Point, Queensland in Australia, run by Abbot Point Terminal Pty Ltd. Now, the plan is to expand the capacity to 120 mtpa in two phases.

SBI later sold $175 million of this loan to Canara Bank and some of its associate banks. The current outstanding in this account is a little over $700 million. I understand that the group has told the bank that it will clear the loan ahead of schedule. Incidentally, SBI chairperson Arundhati Bhattacharya was recently quoted in DNA newspaper as saying the Adani Group would have to first repay and prepay loans of about ₹ 5,000 crore to get the fresh credit and the net credit will be only $200-400 million.

In 2010, the Adani Group acquired the rights to develop the Carmichael coal mine in Galilee Basin, Queensland, with an estimated reserve of 7.8 billion tonnes. It has now been confirmed that the coal reserves would be to the tune of 11 billion tonnes. The Adanis are in the process of getting final approvals and the mining licence is expected in July-August 2015. The Queensland authorities have already given in-principle approvals even as one objection to giving the lease, raised by an environmental group, is being heard in court.

The Queensland authorities have also approved a railway line between the Carmichael coal mine and the Abbot Point coal terminal, covering 382km. The local government has committed to put in $455 million to pick up 45% equity in the rail project run by North Galilee Basin Railway Pte Ltd.

The overall cost of the coal mine project is pegged at $7.8 billion, being funded in the proportion of $5.46 billion debt and $2.34 billion equity. SBI has signed a memorandum of understanding (MoU) to chip in the equity on behalf of two promoters, Adani Mining Pty Ltd—Adani Enterprises Ltd, the holding company of the group which owns 10% stake in the mining firm—and Adani Global Pte, which owns 90%.

The Reserve Bank of India norms allow local banks to fund equity of Indian firms when they buy assets overseas. By planning to finance equity, SBI is taking exposure to two Adani firms, which are into trading, and not the Australian mining outfit. The estimated cash flow of these two firms in the current fiscal year is around ₹ 1,000 crore. As a collateral, the group will pledge shares of Adani Enterprises and Adani Ports and Special Economic Zone Ltd with SBI.

Meanwhile, Commonwealth Bank of Australia has been appointed financial adviser to the Adani Group, and along with Standard Chartered Bank, it will syndicate the $5.46 billion debt. The group is also banking on funding from South Korea’s export credit agencies, as well as a loan from the US Export-Import Bank.

Environmentalists in Australia have been up in arms against the Carmichael project because of the potential danger the mine can cause to the Great Barrier Reef. Rebutting concerns raised by environmentalists, Australian environment minister Greg Hunt in June said the claims about the impact on the Great Barrier Reef are “exaggerated". However, since environmentalists have strong reservations about dredging and dumping at Abbot Point, which could pose a risk to the reef, Queensland authorities have decided against dumping the debris in the sea; the dredging waste will be dumped at an alternative site on land.

A team of SBI executives, led by one of its managing directors, recently visited the site and met Queensland authorities as part of a techno-economic study. The Ahmedabad division of SBI’s corporate accounts group is now conducting the due diligence process and once this is done, a proposal will be placed before the bank’s corporate centre credit committee. In the final stage, the proposal will be taken up by the executive committee of the board. Any loan proposal of ₹ 500 crore or above needs the approval of SBI’s board. The entire process could take about two months.

The industry is watching the mine, rail and port project of the Adani Group with interest against the backdrop of a slump in coal prices to five-year lows and stalled projects of other companies. Australian mines have seen the loss of at least 4,000 coal jobs over the past two years with a drop in prices even as one-third of its coal industry is making losses, according to media reports. Rival Indian firm GVK Power and Infrastructure Ltd’s progress has been slow on the Alpha project, another huge coal mine in the Galilee Basin, co-owned by Australian industrialist Gina Rinehart.

Sure, the Adani Group is overleveraged and many believe that the $7.8 billion project is a gamble which may not pay off unless coal prices recover. SBI’s MoU with the group for a $1 billion loan may or may not get translated into disbursal of money, but to be fair to the bank, it does not look like a politically influenced decision, something which public sector banks are known to entertain once in a while, even though nobody will ever admit it.

Tamal Bandyopadhyay, consulting editor of Mint, is adviser to Bandhan Financial Services Pvt. Ltd, India’s newest bank in the making. He is also the author of Sahara: The Untold Story and A Bank for the Buck. Email your comments to bankerstrust@livemint.com