Are Indian women safe in their homes?

For the first time, the National Family Health Survey includes data on violence against women specifically during pregnancy

Violence against women (VAW) is a violation of human rights. The distinction between violence that happens within homes and that which happens outside has resulted in a skewed understanding of how prevalent this violation is in India and how little is understood about the discrimination that women face even within their own homes. The National Family Health Survey published its most recent findings—NFHS 4 2015-2016—in January 2016. Included in the survey results was evidence pointing to the severity and diverse nature of violence that women in Indian society face. While plenty of news space was given to results related to health of children, coverage of data related to VAW was sorely missing. The lack of reporting and analysis of data on VAW reflects apathy towards this issue that plagues the Indian society.

The NFHS is a survey carried out by the ministry of health and family welfare in collaboration with the International Institute for Population Sciences (IIPS). It provides state-wise data on certain indicators of health and nutrition such as fertility levels, infant and child mortality rates, levels of health awareness, alcohol and tobacco usage, women empowerment, gender-based violence, etc. The previous editions of NFHS were conducted in 1992-93, 1998-99, and 2005-06. For NFHS, the Union health ministry has thus far released the results for 17 states, disaggregated for urban and rural populations. NFHS 4 documented the levels of spousal violence faced by women from across 17 states and Union territories, and for the first time, the survey also includes data on VAW specifically during pregnancy. 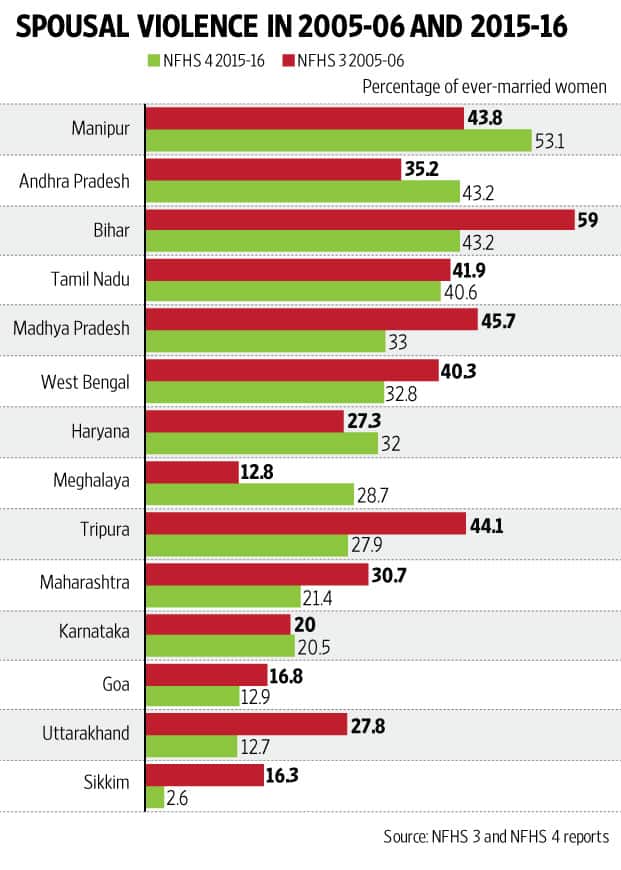 In comparison with NFHS 3, NFHS 4 data shows a general fall in the overall percentage of married women who experienced violence at the hands of their partners. Tripura gains the most in absolute terms with a decrease from 44.1% in 2005-06 to 27.9% in 2015-16. Sikkim shows the most improvement in relative terms, with a nearly seven-fold decrease in VAW. However, four out of 17 states have shown a rise in spousal violence in the last 10 years. The biggest jump has been in Meghalaya where the percentage of women facing abuse more than doubled from 12.8% to 28.7% with a proportional increase in both urban and rural areas. 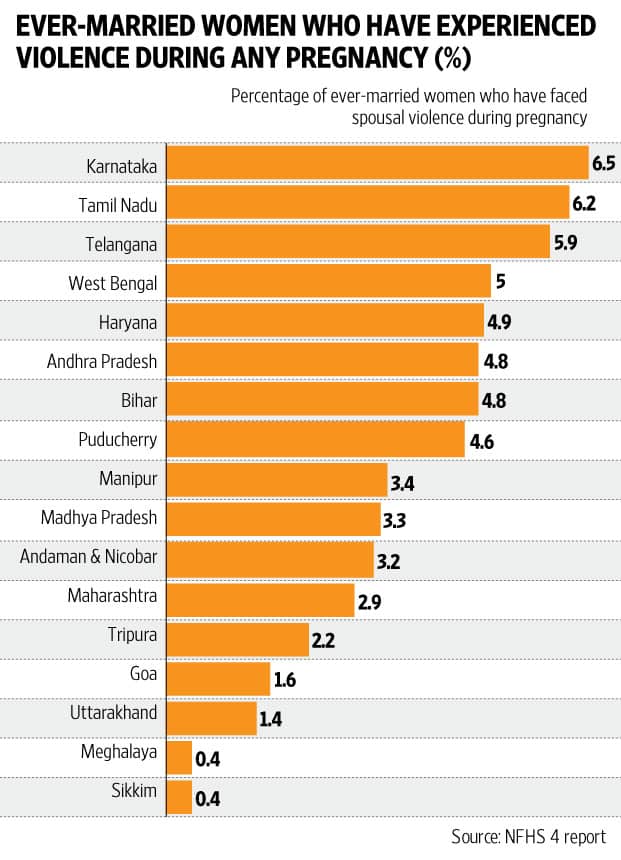 The NFHS data has been a valuable source of information to understand how omnipresent the violence against women is within their homes. While methods have improved, there has been little movement from state governments and NGOs to study and analyse the data offered and craft solutions.

For instance, further study needs to be undertaken to understand the reasons for high rates of VAW in certain states and low rates in others. The reasons for drastic shifts between NFHS 3 and NFHS 4 numbers, as observed in the cases of Sikkim (for the better) and Meghalaya (for the worse), also need to be understood.

Additional data that would help obtain deeper insights is the actual number of violent incidents faced by these women. At present, the report does not distinguish between one incident and repeated violence faced by individual women. For example, if it emerges that in certain states a significant number of women face regular abuse, then it might point to multiple levels of systemic failures in mechanisms that ought to ensure the safety of women in their own homes.

A report published by the UN in 2006 titled Ending violence against women emphasized the need to create strong institutional structures at all levels of governance to ensure action, monitoring and accountability. The NFHS 4 reports are a valuable knowledge base on VAW and the state governments must use this evidence to formulate policies that ensure the protection of women’s human rights.

While we wait for the phase 2 results of the remaining states and Union territories to be published, policymakers in states for which data has been published must commit to gaining a deeper understanding of issues that result in violence.

Eliminating all forms of violence against women requires political will, visibility and resources. A cohesive and strategic effort by the government and civil society is the need of the hour.

Nidhi Gupta is a programme manager and Pritika Fernandes is an intern at the Takshashila Institution. The authors would like to thank Priyadarshini Ravichandran and Varun Ramachandra for their inputs.