Thanks for Visiting Mint
You seem to have an Ad Blocker on. Please turn it off in order to continue, or whitelist Mint
HOW TO TURN OFF AD BLOCKER
OR
REFRESH IF YOU ALREADY TURNED OFF THE AD BLOCKER
Home >Opinion >Sri Lanka: winning the war on two fronts

When television channels across the globe began beaming visuals of Velupillai Prabhakaran’s body on 19 May, there was shock first and then, disbelief. 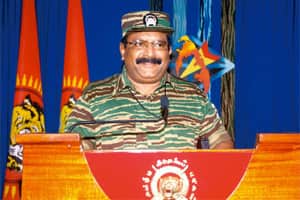 Post-conflict: An LTTE handout photo of Velupillai Prabhakaran. The Sri Lankan government has managed to decimate the LTTE but the greater challenge will be to watch and analyse the country now. AP

Dressed in battle fatigues, his dog tag and his favourite revolver still on him, Prabhakaran’s skull was partially blown off, his eyes wide open even in death. Was he surprised? Shocked? Or simply frozen in fear when death came?

No one will know for sure the exact circumstances under which he was killed. We will have to accept the government’s word that he was killed in a fierce battle.

For, in this war, as in other conflicts, there were no witnesses.

Till 18 months ago, Prabhakaran’s Liberation Tigers of Tamil Eelam (LTTE) controlled one-third of Sri Lanka’s territory. He commanded a large army, a powerful navy and a rudimentary but effective air wing. Prabhakaran was the man who gave the world the suicide bomber. Under him, the LTTE assassinated a former Indian prime minister and a Sri Lankan president and a score of others.

So how was such a powerful terrorist organization brought to its knees?

The LTTE’s decimation can be attributed to two or three big reasons.

One, the Sri Lankan armed forces were given, for the first time in decades, a clear political-military objective by President Mahinda Rajapaksa: destroy the LTTE militarily. Sri Lanka’s army chief Sarath Fonseka explained in an interview to me, the difference between earlier military campaigns and this one, in one simple sentence: “This time we were playing for a win, not for a draw."

Secondly, Fonseka, a battle-hardened veteran, had correctly assessed that the Tamil Tigers had expanded greatly in numbers, but had perhaps lost the agility and stealth that had made the group such a formidable adversary. So Fonseka converted his frontline assault units into a guerilla force by forming small, highly mobile, independent and lethal commando teams. These teams often infiltrated behind the enemy lines to isolate and then demolish LTTE defences.

Thirdly, Prabhakaran, who lived and survived on sheer instinct in the past, made the fatal mistake of keeping 300,000 Tamil civilians with him, as he retreated. These civilians hobbled him severely.

Prabhakaran also overestimated the ability of European nations and the Tamil diaspora to enforce a ceasefire as they had done in the past. This time, Sri Lanka was not going to listen to anyone.

For a professional journalist like me—and a long-time student of wars and insurgencies—the most fascinating aspect of Eelam War IV, as the conflict came to be known, was not just the military strategy but the flawless execution of information warfare and information operations technique by the Sri Lankan state.

I found the Sri Lankan methods of managing the media to be both effective and offensive. Offensive to my sensibilities as a journalist. Effective, purely as a warfare tool. The core strategy was to create a firewall around the battle zone. The objective was two-fold: control and denial. Control the flow of information and deny access to unpalatable foreign journalists.

Simultaneously, the government set up a one-stop shop for information from the battle zone. The Media Centre for National Security (MCNS) became the most important address for visiting and local media during the war. By putting in place this system, Sri Lanka virtually eliminated the possibility of any other source giving news to the information-hungry media.

The local media was tamed through twin methods of coercion and appealing to their chauvinism. Those who refused to fall in line were coerced, threatened and even killed (14 journalists lost their lives in Sri Lanka in the last four years) and all others were won over by a simple appeal: it is as much your war as ours, so please cooperate.

Simultaneously, pro-LTTE blogs and websites such as Tamilnet.com were blocked inside Sri Lanka. The Sri Lankan state thus won the media war hands down. The result: a one-dimensional coverage of Eelam War IV.

For someone who’s also had the opportunity to report the subcontinent’s other big war in Kargil a decade ago, I was not happy being part of one-sided coverage this time, but to be fair to the Sri Lankan state, winning the information war was as imperative as gaining a military victory.

So what next in Sri Lanka? Will Rajapaksa be able to translate the military victory into permanent peace? Will Tamils ever get justice in Sri Lanka? How events pan out in the next one year will determine the long-term future of this tiny, beautiful but brutalized island.

Being on the front line was certainly important for me as a reporter, but the greater challenge will be to watch and analyse post-conflict Sri Lanka.

Nitin Gokhale is NDTV’s defence and strategic affairs editor and has reported extensively on the recent conflict in Sri Lanka. He is currently working on a book on Eelam War IV. Respond to this column at feedback@livemint.com