Are China and India the new colonial powers in Africa?

While China and India's trade with Africa does resemble the traditional model of colonial trade, it extends to investments and projects that aim to cater local demand

Africa has seen increasing trade with China and India since the 1990s; however, the pattern of trade has not changed much despite more diversification in trading partners. The continent’s trade with India and China closely resembles that in colonial times: Africa exports raw materials to the emerging Asian giants, and imports manufactured goods from them.

The prospects of increasing oil and gas exports too does not offer much hope as they need not necessarily translate into greater prosperity given the fundamental differences between the sparsely populated oil-exporting states of the Middle East and the African oil exporters with larger populations.

As a result, the continued concentration of commodities and natural resources in Africa’s export basket raises questions over whether increased trade will boost the continent’s economic prosperity.

One particular strand of thought, such as this 2012 academic paper, has always blamed the colonial pattern of trade for Africa’s impoverishment and delayed journey towards economic development. Thus, the fact that Africa has reduced its dependence on its former colonial powers should theoretically brighten its economic growth prospects?

Historical trade data recently released by French research institute CEPII shows that the share of Europe in Africa’s total trade has steadily declined from around 68% in 1990 to 41% currently. Asia has surpassed Europe as Africa’s biggest trading partner today, accounting for around 45% of the continent’s total trade. In particular, it is China and India which have seen a dramatic rise in their trade with Africa since 1990s. However, the pattern of trade hasn’t changed much since colonial times. China and India mainly buy commodities or natural resource-based products from Africa, while exporting mainly manufactured goods to the continent, thus reinforcing the classic colonial pattern of trade. Of all the exports from Africa to China and India, 90% are commodities and natural resource-based products. In case of Africa’s exports to the rest of the world, excluding the two Asian giants, the share of such commodities and natural resources in total exports is much lower, at an estimated 63%. 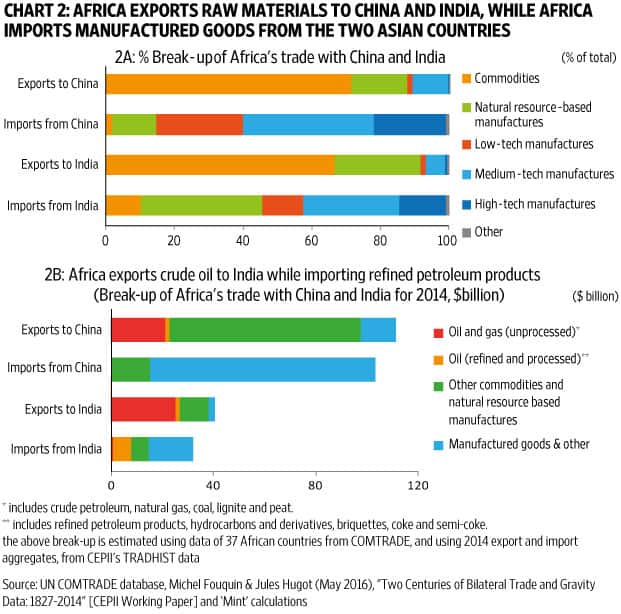 Of course, such trends do not necessarily suggest that Africa’s trade with the emerging Asian giants is in any way exploitative or involves political coercion, which are generally the hallmarks of imperialism. What matters is the fact that even in the absence of overt colonialism, the pattern of trade for Africa remains such that it might trap the continent in long-term poverty. That’s because prices of primary products generally decline over time vis-à-vis industrial goods, as argued by the famous Prebisch–Singer hypothesis.

Can the emerging trade in oil and gas make a difference?

Of course, one could point towards a large number of countries in the Middle East to argue that exporting commodities, that is, crude oil, can often be a gateway to increased prosperity. Indeed, one-third of Africa’s exports to China and India consist of crude oil, natural gas and other hydrocarbons. However, there appears to be no one-to-one relation between oil exports and prosperity or lack of poverty. For instance, Nigeria, a member of OPEC and dependent on oil and gas for 90% of its exports, reported a relatively high poverty rate of 53% in 2009 using the global poverty line of $1.9 per day, according to the World Bank. In contrast, Namibia reported a much lower poverty of 23% in 2009, despite hardly exporting any oil.

The real reason behind the difference in prosperity between African oil producers and Middle Eastern nations like Qatar is the difference in the per capita oil production. The theory, as explained by a Chatham House report, says that since the petroleum sector creates few jobs directly, therefore countries with relatively large populations, like Nigeria, need a big non-oil sector to absorb the large population. Thus, the fact that Africa today exports mostly raw materials and natural resources, as a much higher proportion of total exports than other comparable countries of Asia, many of whom attained independence around the same time, should worry those who wish to see the continent making quick leaps towards prosperity. Is history repeating itself?

In India, colonial trade is associated with the “de-industrialization" of the sub-continent when the British exported manufactured cotton-piece goods to India, thereby destroying the local textiles industry, while often sourcing raw cotton from India itself. Around a century later, China is being accused by some observers of bringing similar ruin to the domestic textile industry of Nigeria through its exports which have been often termed as dumping, that is, selling below cost.

Chinese companies in Africa are also sometimes charged with mostly hiring Chinese labour, leading to eventual repatriation of most of the salaries back to the “mother nation". Thus, there remain apprehensions in some quarters over the increasing role of China in Africa. India, perhaps, escapes such scrutiny due to the much larger size of China’s presence.

That said, over 70% of Africans reportedly have a favourable view of China, according to the Pew Research Centre’s Global Attitudes survey for 2015. 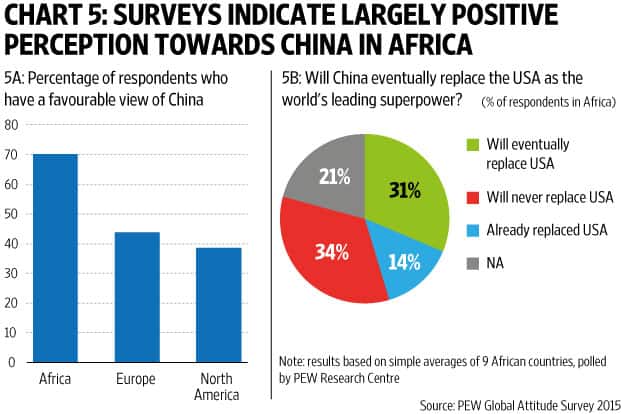 That could be owing to two factors. One, China does not behave like a colonial or imperial power and doesn’t interfere in the political affairs of the continent, as this piece by Yun Sun of the Brookings Institution explains. Two, there is growing Chinese private sector investment in Africa, mostly in the services and manufacturing sector. This challenges the oft-held notion that China only invested in extractive industries in Africa.

India’s involvement in Africa goes much beyond simply sourcing crude oil or other natural resources from Africa. According to Rajrishi Singhal, senior geo-economics fellow at Gateway House, Mumbai, there are broadly four layers to India’s engagement with Africa. First, there is the Indian government’s involvement in the oil and gas sector in a few countries like Mozambique and Sudan. Second, a number of Indian private sector companies like Jindal Africa and Vedanta have invested in extractive sectors like mining. Third, a host of Indian private sector companies have invested in a wide range of industries like solar panels and sugar mills in Africa, often aimed at meeting local demand. Often, the investment by private Indian companies is aided by some government support.

Lastly, the fourth layer of India’s engagement with Africa is the Indian government’s investments in the continent to aid capacity building, through the Indian Technical & Economic Cooperation Programme (ITEC) under the Ministry of External Affairs.

Thus, while it is true that China and India’s trade with Africa resembles the traditional model of colonial trade, the fact remains that the engagement of these two countries with Africa extends beyond merchandise trade to large-scale investments, not necessarily in extractive industries, and to other projects often aimed at catering to local demand.