Home >Opinion >What a wife thinks

What a wife thinks

What a wife thinks

No man is a hero to his valet, or for that matter, his spouse. The greatest of men have often been less-than-worthy husbands, be it Mahatma Gandhi, John F. Kennedy or Albert Einstein. Patrick Henry, the hero of the American Revolution, immortally declared, “Give me liberty or give me death", but afforded neither to the wife he kept chained in the basement.

These sordid details are usually the stuff of biographies, safely tucked between the pages of some 500-page treatise, softened and often redeemed by a larger narrative of valour. But what if the storyteller were the wife, not her famed husband’s biographer? What tales would she tell of the man she married? 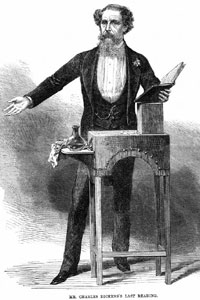 The other: Dickens’ wife believed he had a taste for women in blue.

Wildly celebrated in the literary world, Alfred is a true Dickensian villain at home: a heartless, selfish husband, indifferent to a weary Dorothea, aka Dodo, worn down by the demands of his fame and her eight pregnancies. He develops an unhealthy obsession with one of her sisters and later replaces Dodo with another, Sissy, who takes charge of her household and her children. Adding to the insult of his wife’s eviction, he takes out a newspaper advertisement detailing her shortcomings as a partner and parent. In fiction at least the faithful Dodo gets her feminist moment of liberation when, sprung by Alfred’s death from her life of penury, she reconnects with the world and her children.

The raison d’etre for biography-as-fiction is that the imagination allows access to aspects of the truth unavailable to writers fettered by the facts. In this sense, Girl in a Blue Dress is not a success. Arnold’s unmistakable talent aside, the novel offers little insight on Dickens that a reader would not find in other non-fiction accounts.

Our ennui with celebrity misdoings perhaps explains the greater appeal of American Wife by Curtis Sittenfeld. The book offers an intimate look at a different kind of public figure, a man not celebrated but widely reviled, a man few women could imagine loving for a lifetime. Why would a sensible, intelligent, decent woman tie herself to a conceited dandy with more money than sense? And how could they possibly find any measure of happiness together? What indeed was/is Laura Bush thinking?

It’s a measure of Sittenfeld’s talent that by the end of the novel even diehard Bush haters find reasonable answers to these questions. It is easy enough to believe that genius has its darker side. Far harder to convince us that a man who led a nation to the brink of ruin can bring comfort and happiness to his wife.

So skilful is Sittenfeld in capturing Bush’s humanity that Joyce Carol Oates was moved to complain, “If there is an American gothic tale secreted within American Wife, it’s one of unconscionable, even criminal behaviour cloaked in the reassuring tones of the domestic ... How to take Charlie Blackwell seriously as a purveyor of evil? We can’t, not as we see him through his wife’s indulgent eyes..."

To understand is not to condone, but the danger of rewriting biography as fiction is that we are tempted to do both.