New Delhi: Every day, there are 4 billion searches made on Google. That number is also the count of people who do not have access to the internet, according to the World Development Report (WDR) 2016, released by the World Bank on Thursday. The report, which discusses the importance of advances in information communication technology (ICT) for overall development, has one clear message: to exploit ICT’s full potential in economic upliftment of the poor, attention must be paid towards overcoming backwardness in traditional areas such as education, skill development and governance. Here are five charts that explain that in detail.

1. ICT has led to huge increases in labour productivity

The importance of technical advances such as steam engine and electricity in ushering economic development is well established. The WDR cites research to show that trajectory of growth in labour productivity in the US in the digital era is similar to what was witnessed during the electrification era. The gains, though initially slow, accelerated once technological progress became ripe for widespread usage. What’s better is that developing countries can exploit ICT gains more quickly than past advances.

It took Indonesia 160 years after the invention of steamships to reap its benefits, and Kenya 60 years to have electricity; but for Vietnam to introduce computers, it took only 15 years. Mobile phones and the internet took fewer number of years. More households in developing countries own a mobile phone than have access to electricity or improved sanitation, the report says. One of the biggest challenges towards equitable development is providing employment to groups that face a relative disadvantage in the traditional economy, such as women or disabled persons. ICT-based jobs might be able to solve this problem. The report cites statistics to show that the share of women in ICT sector employment is much more than total non-agricultural employment. These advantages are rooted in the greater flexibility in ICT sector employment such as the option of working from home and reduction in search costs. 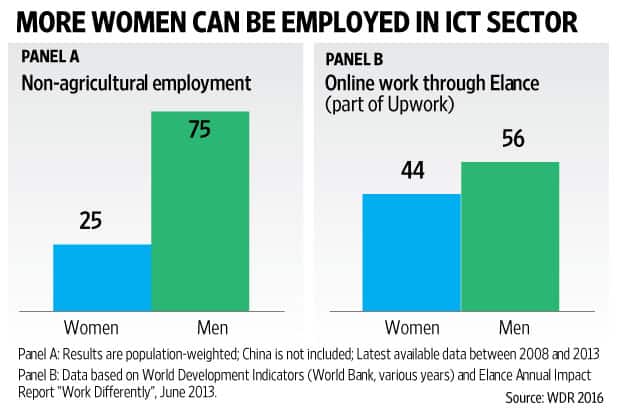 For example, Instagram, a photo sharing app, had just 13 employees in 2012 when it was bought by Facebook for $1 billion. Facebook, in turn, had 5,000 employees at the time—compared with 145,000 at Kodak at its peak in photographic film industry in the 1990s. Yet, Facebook’s market value is several times what Kodak’s was back then, the report says.

4. Access to internet is still ridden by inequality; India has the largest number of offline people in the world The report also has a warning. Notwithstanding the virtues ICT revolution has brought to governance systems—ease in filing tax returns, applying for new businesses or increased transparency and accountability are some examples—it is early days to take online views as sacrosanct, especially in developing economies. Since poor people lag the privileged sections in accessing ICT services, such feedback is likely to be skewed in favour of the latter, the report says. It cites profile-based voting turnouts from a poll in Brazil in support of its advice. Those who treat online polls as the only barometer of societal opinion would do well to pay heed to this warning.