Afascinating aspect about conflict is the human resourcefulness during such perilous times. This ingenuity manifests itself in weapons design, development of tactics and even demonstration of the leadership’s confidence in their soldiers. Interestingly, each country displays its inventiveness in a manner unique to its own culture and strengths. 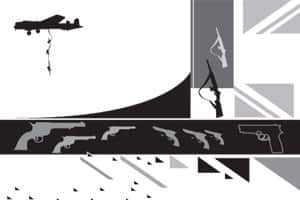 For all its virtues, the Luger had one fatal failing. Its precision engineering caused dust and grime to jam the pistol during the time it was needed the most. Many a German soldier discovered this to his peril during a fierce firefight. The German engineers, however, believed that they had a perfect design in the weapon itself; evidenced by the fact that the precision obsessive Swiss army had also chosen the Luger as its standard sidearm. The solution they came up with was in the form of an exquisite leather holster which covered the pistol in a snug tight fit, thus preventing dust and grime from getting to it.

The Russians on the other hand had to develop a weapon that would offset their weakness while leveraging their strengths. Most of their troops were young uneducated farmhands who would need to fight in extreme weather and terrain conditions. They lacked the training to care for sophisticated weapons and in any case, the Russian manufacturing process favoured mass produced simple but effective, zero maintenance firearms. So they took a German sub-machine gun, design and adapted it to produce the ubiquitous and iconic assault rifle that would go on to see more service than any modern weapon ever produced by man—the AK-47. While the AK-47—and its modern variant the AK-74—is a very effective assault rifle in all respects, its forte is unflinching reliability. The AK has been known to operate effectively despite any possible abuse that man or nature could throw at it. A fact that has resulted in more than a hundred million of them being produced and despite its lack of sophistication this weapon has found its way into the armies of several countries other than Russia—including India.

Sometimes, tactics need to be modified to suit new circumstances. The British Special Air Service (SAS), which is the forerunner of many anti-terror outfits in the world, had its roots in the deserts of Libya where they operated in jeeps deep inside enemy territory destroying enemy aircraft. For this they had six heavy machine guns per jeep which were capable of spewing awesome firepower on the enemy. Though the SAS was disbanded after World War II and re-raised in many avatars, the massacre of Israeli athletes in Munich in 1972 prompted its resurrection as one of the finest anti-terror commando units ever to see service.

From the legacy of long range high-powered guns, SAS now had to adopt low velocity weapons which are necessary for hostage rescue situations. A high-powered bullet would simply go through the intended target and hit several hostages in the line of fire. However, the Browning pistol that the SAS used during its nascent stages had a problem. Its 9mm, low velocity round had relatively less “stopping" power. The terrorist could still fight even after he was shot. Rather than increasing the velocity and thus endangering innocent hostages, the SAS created the famous “double tap" or two shots fired in quick succession onto the chest or head—a practice which has permeated into every special force of the world; as Osama Bin Laden discovered in May last year when he was taken down by the SEALs with a chest and headshot.

But perhaps the most remarkable of all stories in this genre, is the one about the SAS “killing house". This two-floor facility was created to train commandos in high-risk hostage rescue situations where they have to storm a building in darkness amid smoke and confusion to kill the perpetrators without hurting the hostages. And all this has to be achieved within seconds to prevent hostages being killed by their captors. Significantly, commandoes train using live ammunition in the killing house as they believe that all exercises must be realistic, notwithstanding the frequent risk of fatalities.

But what is truly incredible is that the “killing house" has had many dignitaries as visitors, including the royal family and prime minister Margaret Thatcher who chose to sit in the position of a hostage during one such demonstration. Seconds later, SAS commandoes exploded stun grenades and stormed into the room shooting targets inches from her head—using live ammunition and successfully “extricated" her. The Iron Lady, who had ordered the SAS into the Iranian embassy in May 1980, showed the faith she reposed in their abilities in the most unequivocal manner possible.