Business reforms in 2018: leaders and laggards

India's states were most busy enacting reforms and initiating projects in infrastructure, and administration and governance

When analysing reforms enacted by India’s states in the first quarter of 2018, the Wadhwani chair in US–India Policy Studies at the Center for Strategic and International Studies (CSIS) uncovered that from January-March, India’s states were most busy in enacting reforms and initiating projects in infrastructure (including energy and transportation), and administration and governance. States from Jammu and Kashmir to Kerala and Rajasthan to Mizoram were active in this first quarter and a snapshot of these reforms are outlined below. States leading the charge with the highest number of reforms enacted in this period include Maharashtra with 19, Haryana with 16 and Uttar Pradesh (UP) with 12. A focused look at Karnataka ahead of elections reveals that the incumbent government enacted a total of eight new reforms or projects in this quarter. With an eye towards the elections, the reforms and projects initiated by the Congress government included those that would have an impact on people’s daily lives. 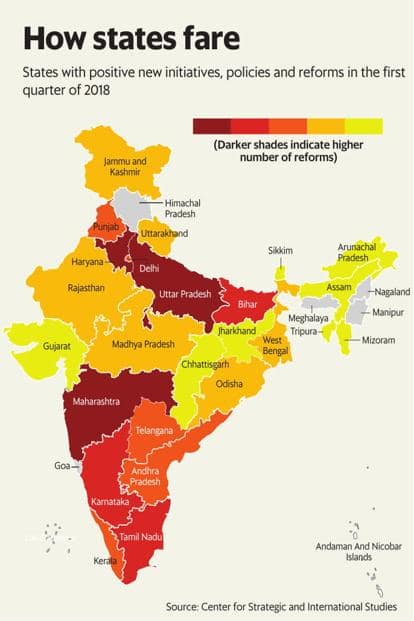 Improvements to administrative systems and governance mechanisms can facilitate the delivery of critical services to citizens and improve the business environments of states. In the first quarter of 2018, states leveraged a variety of digital tools, hardware technologies or enacted policies to make it easier to make business decisions or engage with citizens. For example, on policies, Haryana passed two financial regulations, including a new policy on interface with banks for government departments to increase transparency and streamline the use of funds for various projects. In addition, the state government decided to give city magistrates the responsibility to manage district urban affairs officers to more quickly execute development projects. Maharashtra too made the administrative processes simpler by introducing a three-step process to quickly approve proposals.

On the use of digital tools, the Telangana government launched “T App Folio", a mobile application to provide citizens with a single platform to access government services and bill payments while Tamil Nadu launched an e-governance policy to enable public, government, and commercial establishments to provide all their services digitally. UP went one step further by launching a single-window system to clear projects digitally with no human interface. To better manage their data, Maharashtra and Andhra Pradesh became the first states to announce and approve public cloud data policies to shift government data storage on to the cloud. Finally, leveraging satellite technology, the Uttarakhand government signed a memorandum of understanding with the Indian Space Research Organization (Isro) to receive up to 72-hour advance forecasting and instant delivery of images post-disaster.

Quality infrastructure, including energy and transportation, is critical for unlocking the growth potential of states.

On power, Jammu and Kashmir amended its Electricity Act of 2010 in order to set up the J&K State Power Trading Corp. Ltd. The UP government aims to ease restrictions of power procurement for its industrial consumers by allowing open access. Finally, with an eye towards managing its crop residue burning problem, the Haryana government approved its bio-energy policy, which seeks to attract private investment to generate 150 megawatts of power and support research and development of new technology.

Maharashtra became the second state in the country to launch an e-vehicle policy, which included several incentives such as subsidies for consumers and for the development of charging stations. Meanwhile, Delhi announced a plan to procure 200 electric buses and identified two depots to set up charging stations.

Finally, in the lead-up to the recently concluded elections, the incumbent government in Karnataka tried to enact several reforms and initiate projects that would be visible to the electorate. These policies may not have ultimately been enough for the Siddaramaiah government to singularly retain control of the state assembly, but will affect a variety of sectors.

On energy, the government launched the Mukhyamantri Anila Bhagya Yojane (MMABY) initiative which provides free cooking gas connections to the poor—modelled after the Pradhan Mantri Ujjwala Yojana. On health, the government launched the Arogya Karnataka healthcare initiative to provide free and subsidized quality treatment to people below and above the poverty line, respectively. To spur innovation and job growth, the government created a new legal framework to help start-ups adjust to new regulations and a new entrepreneurship initiative promising $5,520 over a year to every entrepreneur to incubate their idea in the state’s innovation cell. On water and sanitation, the government signed a $406-million loan with the Japan International Cooperation Agency for the third phase of the Bengaluru Water Supply and Sewerage Project. On agriculture, the Ramthal project, the largest drip irrigation scheme in the country, was commissioned to benefit farmers. Finally on transportation, a $54.3- million investment went into a special purpose vehicle to develop a suburban rail project for Bengaluru and the state announced a modest procurement and deployment plan for electric buses and other vehicles as well as charging stations.

Kartikeya Singh is deputy director and fellow, Wadhwani chair in US-India Policy Studies, at the Center for Strategic and International Studies.