China and India are two of the fastest growing economies in the world. But they are following very different growth paths. China is a formidable exporter of manufactured goods. India has acquired a global reputation for exporting services, leapfrogging the manufacturing sector.

India’s growth pattern contradicts an iron law of development that has held true for 200 years, since the start of the Industrial Revolution. This law has argued that industrialization is the only route to rapid economic development for developing countries. The potential for explosive growth was seen only in the manufacturing sector.

This is no longer the case. The new industrial revolution and digital technological changes have changed the growth drivers in developing and developed countries. These technological changes have enabled services to be the new driver of growth. The digital revolution, by lowering transaction costs in services and overcoming problems of asymmetric information, has made services more dynamic than in the past. The emergence of e-commerce platforms is an example of how digital revolution can lower transaction costs, increase productivity as well as make it more inclusive. For many internet-based businesses or services, fixed up-front costs can be high initially, but once the physical infrastructure is in place, each additional customer, user, or transaction incurs very little extra cost. 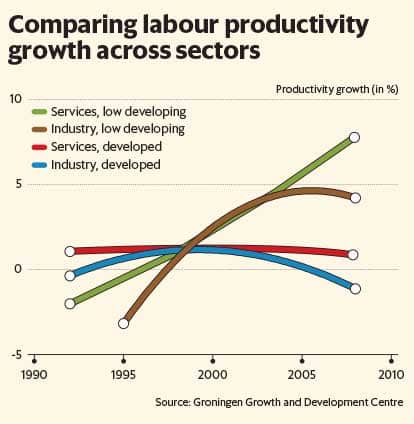 The chart shows the sectoral trends—agriculture, manufacturing and services—over the last four decades, for a large group of countries. In the early 1970s, the relationship between the manufacturing labour share and income was far steeper than it is today, having followed a progressive erosion of the initial strength of this correlation over the past four decades. The relationship between income and economic structure has shifted over time, with countries across the income distribution uniformly increasing the share of labour in service sectors and an increasingly less stark relationship between manufacturing intensity and gross value-added per capita. While global growth convergence in manufacturing was a clear and strong trend some decades ago, it is no longer as strong in recent decades. Services show stronger growth convergence in recent decades.

Drivers of structural transformation and growth, either services-led growth or manufacturing-led growth, are similar but also changing. These include trade policy, urbanization, and investments in physical and human infrastructure, and are country-specific. But some global trends have started to change. Global trade in goods has never fully recovered since the global financial crisis of 2007-08. But this is not the case with global trade in services, which has exploded. These are structural and not cyclical changes. Globalization of services is the tip of the iceberg. Services, which account for more than 70% of global output, are still in their infancy. The long-held view that services are non-transportable, non-tradable, and non-scalable no longer holds for a host of services that can be digitized.

The globalization of services provides new opportunities for India to find niches beyond manufacturing, where it can specialize, scale up, and achieve explosive growth. As the services produced and traded across the world expand with globalization, the possibilities to develop based on services will continue to expand. This pace of change will be rapid in line with the digital revolution. Global internet usage has grown globally. But this growth is much faster in developing countries. India alone adds one million new users every month to a booming mobile phone market.

A young population is generally more connected with technological changes. So, India’s demographic dividend should be an asset for the digital revolution and services-led growth. Job growth is important, as ten million more people will join the labour force every year in India. Agriculture and manufacturing create fewer jobs today compared to the past. But this is not the case with services.

Some policy experts have rightly argued that India is on the “brink" of a techno-institutional revolution. Take the example of mobile technology and examine its role in banking. Banking is currently concentrated in the urban areas, but cities are saturated with bank branches. On the other hand, 300 million rural people across 300 districts in India have no access to banking. Expansion of digital technology can play a big role in improving rural access to banking. Financial inclusion can be achieved through last-mile connectivity. Services are spatially more neutral compared to manufacturing. So financial inclusion could in turn help medium-size cities, small towns and villages to become new drivers of growth.

India’s experience offers hope to other latecomers to development. The process of globalization in the late 20th century led to a sharp divergence of incomes between those who industrialized and broke into global markets and the “bottom billion" in some 60 low-income countries, where incomes stagnated. It seemed as if the “bottom billion" would have to wait their turn for development, until giant industrializers like China became rich and uncompetitive in labour-intensive manufacturing. This is no longer the case.