In 1982, social scientists James Q. Wilson and George L. Kelling postulated the Broken Window theory popularized by Malcom Gladwell in his 2000 best-seller The Tipping Point. This theory was used by the New York City Transit Police to clean up the hell hole that the city’s subway had become in the 1980s. Vagrants and muggers ruled the underground after dark. Drunks and drifters wallowed there and used platforms as urinals. The trains were dirty, damaged, littered and splattered with graffiti. 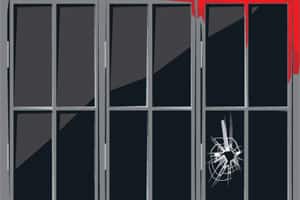 The Broken Window theory went something like this: If there was an abandoned house in a street, which had some broken windows, vandals would come along and break some more. If the broken windows stayed unrepaired, it would embolden delinquents to break open the doors and become squatters. Before long, the place would turn into a den for petty crime and criminals and soon that entire street would turn into a “criminal" zone with drugs, illicit liquor, trafficking and other serious crimes.

According to Kelling, this all began with the first broken window. Allowing them to remain broken sent out the message that no one was in charge and that started the criminalization process. And this is exactly what Bratton addressed in his campaign to clean up the New York subway system.

Bratton began by literally cleaning the trains. The New York subway had many more pressing problems than dirty trains. They were losing money, trains were never on time and the whole experience of travelling on the subway was a nightmare. Yet, Bratton focused on cleaning the trains, at times waging a raging battle with the graffiti “brigade". He then extended the zero tolerance approach to ticketless travellers, arresting and trying them in mobile courts. At times, his cops would arrest so many delinquents that they would be daisy chained in handcuffs and led out in large groups. Every arrested person would also be searched and checked for criminal records. This forced criminals to avoid carrying illegal arms and ironically to start buying tickets!

Bratton also started the strategy of a diverse police force, representative of the community being policed, being tough on gangs and encouraging a strict policy against any form of anti-social behaviour. Before long, Bratton’s methods started showing success and were emulated by other police forces as well.

We encounter the Broken Window virtually every day. Only it is called the “red light jumper". Picture a herd of vehicles champing at the bit, on a red light. A lone motorcyclist revs up and jumps the red light and that is the trigger for scores of hitherto law abiding citizens to break the law. All it takes for the whole crossing to stay disciplined or turn into a morass—is fixing that first red light jumper.

This article is not about traffic violations, though. It is about the increasing intensity of violence descending on our society day by day. Babies, women and grandmothers are brutally raped—often by the very people who are supposed to be protecting them. People are killed over a few rupees or minor affronts. Ten-year-old child workers are beaten to death in squalid sweatshops run in the national capital. Scores of deaths in separatist violence, hundreds in agitations and thousands because of starvation don’t even register in mindshare anymore. And employees of companies, which are taught as case studies in management schools are burnt alive, while the community and the larger fraternity stand by watching and—continue to stand by watching.

Bratton did not seek to appoint committees to discern the “root cause" of the state of New York City. He did not resort to apportioning the blame on other stakeholders. He also did not try to boil the ocean by addressing all the mores of a crime-laden city. Instead, he chose one broken window, made that a non-negotiable and pursued it relentlessly.

Given our geometric and skewed growth, India is going to face numerous shortages, ranging from jobs, food, living space, water and virtually every other resource. It would be naïve for us to believe that we will not have our share of disagreements and conflicts. But we must choose our broken windows carefully and make them non-negotiable. So, while we can be argumentative, we should not tolerate violent articulations of those arguments.

Our society needs to introspect some basic definitions. If we believe that we are democratic and free people who want to live without fear or terror—then we must remember that terror is not always from across the border and freedom is never really free. It must be paid for by fighting terror and intimidation in all its forms—not by looking the other way and hoping that it will not happen to us or those dear to us.