Who benefits from fuel subsidies?

Many countries seek to protect poor households by subsidizing the consumption of fuel products. However, recent research by the International Monetary Fund (IMF) shows that fuel subsidies are both inefficient and inequitable, including in India.

At a global level, a major new cross-country study by IMF showed that fuel subsidies generally crowd out high-priority public spending (such as on health, education and infrastructure), put pressure on current account deficits, distort productive investment towards energy-intensive sectors and technologies, and contribute to global warming. Fuel subsidies are the opposite of carbon taxes, after all. But the study (available at www.imf.org/subsidies) also showed that fuel subsidies are regressive, meaning that they actually benefit the rich much more than the poor.

Averaged across a large number of low- and middle-income countries, the study found that the top 20% of households capture six times more in benefits from fuel subsidies than the poorest 20%. Why is that so? It’s because upper-income households consume a lot more fuel products than poor ones, especially petrol, which is the most regressive fuel product to subsidize. The image of a millionaire zooming by in his big SUV comes to mind. By contrast, kerosene—more likely to be consumed by poor families—is the least regressive product to subsidize.

But what about India? Are fuel subsidies also anti-poor? Sadly, yes. A new IMF working paper (http://bit.ly/137nyEm) shows clearly that India’s fuel subsidies are both fiscally costly and socially regressive. 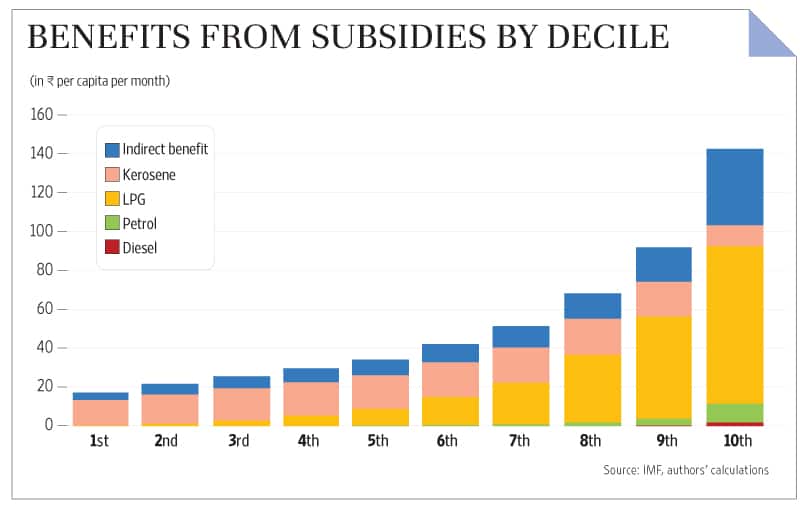 But what has not been widely remarked upon is that reducing fuel subsidies can be seen as a pro-poor measure. In per capita terms, the top 10% of Indian households spends more than 20 times as much on fuel as the poorest 10% (including both direct and indirect consumption—the latter being when food, for example, is transported to the market using subsidized fuel). Low-income households consume mainly kerosene, while upper-income households predominantly use petrol and cooking gas.

What that means is that, if fuel products were moved to market prices, the top 20% of households will pay six times more for fuel per person each month, than the poorest 20%. Put another way, the bottom 40% of families could be fully compensated for the move to market prices for less than one-fifth of what government now spends on fuel subsidies, leaving significant savings to invest in roads, schools and hospitals.

Of course, the example above assumes no leakage of benefits, and that’s a major challenge in India at this stage. But even if half of the efficiency gain were to be lost to leakage, fuel subsidy reforms will still create a lot of fiscal space in India’s budget for high-priority spending. In this respect, the Indian government’s plan to improve the targeting of fuel subsidies is particularly promising.