As the economic recovery gathers momentum and gets broad-based, RBI governor D. Subbarao’s task is to balance the twin objectives of growth and price stability. But it doesn’t end there. There is another dimension to this balancing act. Subbarao also needs to ensure that the government is able to borrow from the market and bridge the fiscal deficit. This is as important as combating inflation.

So while “monetary policy considerations demand that surplus liquidity should be absorbed" and interest rates should be raised, “debt management considerations warrant supportive liquidity conditions". Indeed, all past RBI governors have faced this dilemma, but no one has possibly put it so bluntly in the policy document. Apart from fighting inflation, the monetary policy stance for fiscal 2011 is to manage liquidity in such a way that credit for both companies as well as “public sectors" is satisfied in a non-disruptive manner.

The underlying meaning is quite clear. Even though the situation demands more aggressive tightening of monetary policy, both through higher doses of a hike in rates as well as banks’ cash reserve ratio (CRR), the portion of the deposits that commercial banks are required to keep with RBI, the central bank can’t afford to rock the boat at this point. After all, the government needs to borrow Rs4.57 trillion this fiscal and 63% of this is to be raised in the first half of the year, between April and September. Indeed, the quantum of gross borrowing is less than what the government had raised last year, but the net borrowing programme (net of redemption of old bonds) or the fresh issuance of bonds is 36% higher and RBI, being the government’s merchant banker, needs to see this through. 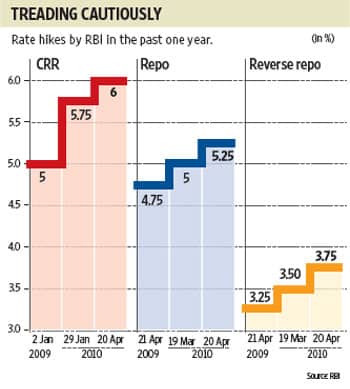 Since September 2008, when the collapse of US investment bank Lehman Brothers Holdings Inc. led to an unprecedented credit crunch across the globe, RBI has done a competent job in crafting a fairy-tale recovery in record time. It was fast in cutting rates and CRR and flooding the market with cheap money. But now it seems to be slower than what is warranted for reversing the cycle. With the return of pricing power to Indian corporations and high and rising levels of capacity utilization and surging imports, the central bank will have no choice but to aggressively raise rates as well as CRR. It can at best delay the inevitable by adopting a “calibrated" approach.

Both the equity as well as bond markets staged a relief rally on Tuesday after the policy was unveiled, but the relief may not last long. I would not completely rule out another set of rate hikes in June, ahead of RBI’s quarterly policy review in July. Subbarao has kept the door open for such action by saying RBI is prepared to respond “ appropriately, swiftly and effectively" to combat inflationary pressures, but he should not make this a habit.

Tamal Bandyopadhyay keeps a close eye on all things banking from his perch as Mint’s deputy managing editor in Mumbai. Comment at bankerstrust@livemint.com