Making sense of inflation in India

So what’s going on with India’s inflation? A year ago, Consumer Price Index (CPI) inflation had re-accelerated to 7.4% and real questions were being asked if more rate increases were needed to hit the 8% inflation target for January 2015. Six per cent seemed unthinkable.

Who would have thought that a year later, the January target would have been undershot by 300 basis points (bps), or 0.3 percentage point, rates would have been cut by 75 bps and, despite that, inflation was on course to undershooting even the 6% target. Sounds fairytale like, right?

But then, who would have thought a year ago that crude prices—after averaging $110/barrel for three and a half years—would lose 60% of their value in a matter of months? And, who would have thought that global commodity prices would fall to their lowest level in 10 years—even lower than at the depths of the 2008 global financial crisis? 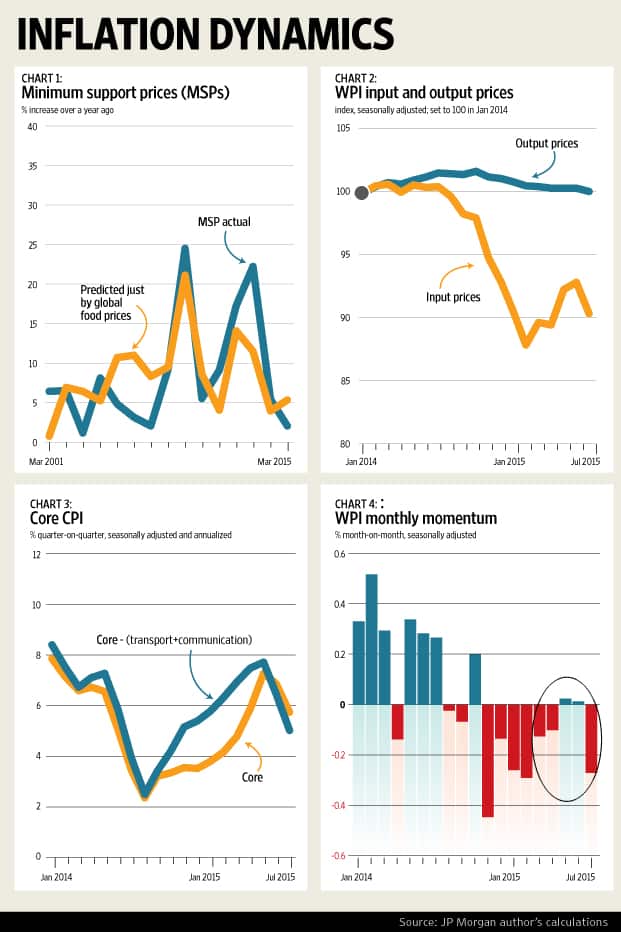 But this is now water under the bridge. The more relevant question is what explains the ebbs and flows of inflation dynamics over the last few months and what that means for the future. Why the sharp upside surprise in June followed by a sharp downside surprise in July? Headline inflation momentum actually re-accelerated from 3.8% (quarter-on-quarter, seasonally adjusted and annualized, or q/q, saar) in January 2015 to 6.5% by April before retreating to below 4% in July. Headline dynamics largely reflect those of the core CPI, which—cleansed of the oil impact—rose from 5.8% q/q, saar in January to 7.8% mid-year only to retreat to 5.1% by July. So why the rise, and then why the subsequent retreat?

Prima facie, the growth acceleration over the last few months, albeit modest, should be causing slack to slowly reduce and output gaps to close. And even though the monsoon has panned out better than expected, it has been consistently below normal since the start of July. Finally, the Reserve Bank of India (RBI)’s latest inflation expectations survey shows expectations are re-accelerating. Shouldn’t all this be putting upward pressure on inflation? So why did momentum soften in July?

First, it’s important to understand where the disinflation is coming from. Food accounts for 46% of the CPI basket, but has been responsible for 62% of the disinflation between FY14 and FY15. After averaging almost 12% in 2013-14, food inflation fell off sharply to 6.6% in 2014-15 and has moderated further, with the seasonally-adjusted monthly momentum contracting in July, despite the growing deficiency of the monsoon.

With 92% of the food disinflation driven by cereals and vegetables, it is tempting to attribute this to domestic factors. Minimum support prices (MSPs) play a key role in driving cereal inflation and, to its credit, the government has showed restraint on the MSP front. Econometric analysis confirms the importance of MSPs. After controlling for other potential determinants of cereals inflation, MSPs have a large and statistically significant impact on inflation, with a 1 percentage point increase in cereal MSPs increasing cereals inflation by 0.5 percentage points.

But what’s not ordinarily evident or intuitive is the role of global food prices. When we add them to the mix, we find that they have a large and significant impact on cereals inflation, to the point that the relationship between MSPs and cereals inflation becomes statistically insignificant. What this suggests is that the variation in MSPs is largely mimicking that of global food prices.

To confirm this finding, we explicitly model the drivers of MSPs, and find that, compared to other determinants such as wages and fuel prices, global food prices have the most statistically and economically significant impact on the setting of MSPs. Chart 1 shows the actual evolution of MSPs compared to that predicted simply by global food prices. While there was always a suspicion that global food prices mattered in MSP-setting, its empirical strength is striking.

What’s more, we find empirically that even vegetable inflation—for which the government does not set MSPs—is influenced by aggregate MSPs. We suspect a substitution effect is at play, with higher MSPs for cereals and pulses attracting more resources towards production of those foods groups and thereby driving up vegetable prices.

What about the other risks to food inflation? The recent spike in vegetable prices and the deterioration of the monsoon? Are they game-changers? While much is made of the recent spike in vegetable prices, this is largely a seasonal phenomenon. The quantum of the increase in onion prices is in line with that of previous years, while potato and tomato price increases are much lower than previous years. Therefore, don’t be surprised if year-on-year vegetable inflation is very muted or negative in the August CPI print.

What about the growing monsoon deficiency? We find the impact of the monsoon on food inflation is very non-linear. Over the last 15 years, rainfall shortages below 15% don’t have a statistically significant impact on food inflation—suggesting that the use of buffer stocks and imports have been able to offset shortages to a point. In contrast, however, rainfall shortages above 15% have a large impact on food inflation. For now, despite its weakening, the monsoon’s cumulative deficiency is 9% and still some ways from the 15% threshold that we find important in the data. But things can change quickly and there is no room for complacency.

So, softening food price dynamics can be explain by lower MSPs, the role of global food prices and the non-linearities of the monsoon’s impact on food prices. But what then explains recent core inflation momentum, which rose appreciably in the first few months of the year, but fell off sharply in July, across both the CPI and the Wholesale Price Index (WPI) (Charts 3 and 4). Changes in final prices are typically a function of both input price dynamics and the degree of slack, which drives pricing power. To the extent that growth has been lifting (albeit slowly), the latter should be putting upward pressure on final prices. In recent months, however, large gyrations in input prices appear to be the key driver of output prices. Chart 2 shows the evolution of (seasonally adjusted) input and output prices from the WPI basket. The first thing to note is the extent to which input prices have collapsed (fuel, primary articles and minerals) in manufacturing reflecting the global oil and commodity collapse. This has significantly bolstered firm margins. So. even as much is made about lack of pricing power and soft manufacturing output prices, there isn’t much acknowledgement about the extent to which firms have been helped by widening margins on the back of the input price collapse—also evident in the April-June corporate results.

Second, note that core prices began to accelerate in the first half of 2015, when commodities, led by oil, began to re-accelerate and pushed up input prices. During these months, CPI core-core momentum firmed up sharply (Chart 3) and the sequential contraction in WPI core began to fade (Chart 4). But then, from the middle of June, oil and global commodities began another sharp correction, pushing down input prices for Indian firms. And this coincided with the sharp drop-off in core momentum in the July inflation reports. What this suggests is that the sharp gyrations in input prices—led by global commodities—have been the key drivers in shaping core momentum in recent months, even as output gaps are slowly closing.

So, what’s the bottom line? First, that the invisible hand of global food and commodities is larger than the direct effect of fuel and pulse prices, even in the CPI index. Second, the sharp retreat of oil and commodities from June and the continued correction of global food prices appear responsible for the downside surprises in July, and seem to have more than offset domestic inflationary pressures. Third, if these trends continue on the back of the Chinese slowdown, Iranian oil coming on-stream and any Fed hike being pushed back on the strength of the US dollar, further downside surprises to inflation are possible in the coming months.

It is important, however, that this does not translate into a sense of complacency among policymakers and markets. Let’s assume, for the sake of argument, that January 2016 inflation prints at 5%—a full 100 bps below the target. Should this give rise to hubris or pause? Think about this for a moment. On the back of one of the sharpest global commodity and oil corrections in memory, India’s inflation is still at 5%. What will happen when we are not the beneficiaries of this global benevolence? Can inflation remains at these levels when oil prices haven’t contracted by 60% or commodities haven’t contracted 30% in a year? It is not clear it can.

So rather than claiming a premature victory on inflation, let’s use the breathing room that depressed commodity prices offer to do some house-cleaning of our own. Fix our remaining food and supply bottlenecks and lift India’s non-inflationary rate of growth. So that when the cycle turns—and at some point it will—we are not left holding the bag.