There’s a wide divergence between the state of the global economy and that of the equity markets. While the economy is mired in a deep rut, the markets are soaring on hope.

Consider the economy. The JPMorgan Global Manufacturing & Services Purchasing Managers’ Index for August was barely in positive territory and lower than its July reading. Global manufacturing has been contracting for the past three months. Falling levels of international trade have hit the manufacturing sector hard. Global services have so far continued to expand, but it’s decelerating. Growth in new orders has tapered off. It’s hardly a situation conducive to hope. 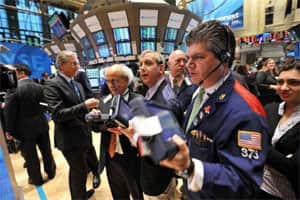 A file photo of the traders on the New York Stock Exchange. Photo: AFP

The markets are rallying solely on the promise of more liquidity. The ECB’s unlimited bond buying programme has already sent markets higher. The Chinese authorities have already started loosening their purse strings, with many new projects being announced.

Periods of quantitative easing in the US have led to a weaker dollar, which has supported fund flows to emerging markets. A Citigroup study says that global emerging markets (GEMs) went up by 79.6% in dollar terms during the first round of quantitative easing (QE1) and 18.7% during QE2. And we shouldn’t forget the rally after ECB president Mario Draghi announced his long-term refinance operations (LTRO) last year.

How have these waves of liquidity affected the Indian markets? The results have been mixed: MSCI India rose by a staggering 103.5% in dollar terms during QE1 and a mere 8.8% during QE2. And it rallied 21.4% after the ECB joined the party late last year. At the start of QE1, valuations in the Indian market and in markets in general were much lower so the impact was much stronger. Moreover, many emerging markets had strong fiscal and local monetary stimulus during QE1.

The problem is that some of the liquidity spills over into commodities, especially crude oil. The August global PMI data saw input price inflation at a five-month peak, mainly due to higher crude and transportation costs. For India, which imports most of its crude, it’s a big worry.

The mainstream view has been that continued monetary easing in the developed economies is essential to prevent them sliding into deflation. But there could be several unintended consequences of drinking too long and too deep at the liquidity font. William White, as economist at the Bank for International Settlements, was one of the few who warned about the crisis. He has in a recent paper (Ultra Easy Monetary Policy and the Law of Unintended Consequences, Federal Reserve Bank of Dallas) said monetary stimulus may not be the right medicine.

As proof, White points to the shoddy history of monetary easing in developed markets and particularly in the US. Monetary easing after the 1987 stock market crash led to a property boom in the last eighties and when this boom went bust, another bout of monetary easing in the advanced economies led to a flood of money into Asia, contributing to the Asian crisis in 1997. This was used as an excuse for not raising policy rates in the US, which lead to increased leverage that contributed to the fall of hedge fund LTCM in 1998. That in turn was another excuse for keeping interest rates low, which led to the dotcom bubble and the subsequent bust of 2000. Monetary policy continued to be easy after the bust, leading to the housing boom and the financial crisis.

So what has been the impact of this continuous easy money policy? Argues White, “By mitigating the purging of malinvestments in successive cycles, monetary easing thus raised the likelihood of an eventual downturn that would be much more severe than a normal one. Moreover, the bursting of each of these successive bubbles led to an ever more aggressive monetary policy response.... In short, monetary policy has itself, over time, generated the set of circumstances in which aggressive monetary easing would be both more needed and also less effective."

Ultra loose monetary policy in the developed economies has led to the divergence between the economy and the markets. To be sure, it has also bought time for their policymakers. But the question is: at what cost?

Manas Chakravarty looks at trends and issues in the financial markets. Your comments are welcome at capitalaccount@livemint.com.