When Narayana Murthy said that India has fallen well short of expectations generated in 1991 and that the post-1991 buzz for India has fully evaporated, he was not saying anything new. It has been apparent to many perceptive observers for quite some time. The task of dismantling the India-shining story that began in 2004 is now almost fully accomplished. Of course, it is not just the government or politicians that deserve the credit. We have a pride of place, too. When ministers Kapil Sibal and P. Chidambaram talk of zero loss to the nation on account of spectrum or coal allocations, they are not being stupid. They have astutely recognized that they are dealing with an apathetic nation—a nation whose apathy makes its aspiration to be a super-power both pathetic and pitiable.

Yours truly logged about 1,000km in the last four days visiting ancient temples in the Tanjore-Kumbakonam-Mayiladuthurai belt in Tamil Nadu known for their architectural splendour. The temples that I visited date from around 1148 BC to 1012 AD. The oil paintings and sculptures pack so much of creativity and artistic expression that even non-believers can lose themselves for days and months exploring and marvelling at their beauty, even if the divine tales behind them leave them unmoved. The tales will reveal their deep spiritual meanings for those who care to reflect on them. 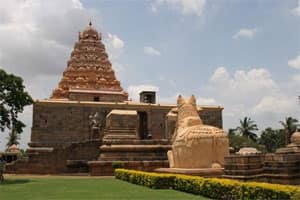 The well in Gangai Konda Cholapuram (a Unesco Heritage site) is murky and filled with filthy water. Photo: Wikimedia Commons

Our behaviour on the road is not merely a question of etiquette. It captures most things that are holding us back and are going to hold us back. We are happy to get off from a moving bus at a traffic island, be sandwiched between two lorries belching copious quantities of black smoke, while trying to cross the road to the other side. It is not our lack of concern for collective but the disregard for personal safety that leaves one stumped. It is almost as if we tell the rest of the world that our safety is their problem. It is a life of blissful ignorance of priorities. Instant gratification at its worst.

We comfortably ride three or four on a motorbike with the right hand on the bar and left cradling a mobile phone on the right shoulder. We do not dim the headlights in consideration for the vehicles coming at us. We have no hesitation in riding on the wrong side of the road because we need to reach a tea-stall or find a bush to relieve ourselves. We yield to none even when we face off each other on a narrow bridge through which only one vehicle can pass. We stake our egos on petty and trivial issues.

The same pettiness makes us construct mosques, madrasas and churches in granite and marble in the villages and in the three temple towns mentioned above. Imagine how cheap it would be for a Hindu temple to steal the limelight and be a source of distraction near the Velankanni St. Mary shrine or near the Nagore dargah. Think about it.

It is a nation that has no pride in the past, does not identify priorities for the present and hence no sense of purpose about the future. It is a nation with no sense of history. Such a nation may still achieve spurts of economic growth, but it is unlikely to realize its potential ever.

The obsessive pursuit of instant gratification has resulted in the flight of decency, decorum, discipline and dignity from India’s public space. Anything that is scarce becomes more valuable. Therefore, there will be a natural scramble to possess them. Those who possess and display scarce commodities are rich. But not in India. These Ds are in short supply not because they are increasingly in demand, but because Indians have become incapable of generating them.

It is not impossible to find exceptions to this narrative. In a nation with a population of billion-plus, that is a statistical inevitability. But such exceptions are merely balm for aching hearts. Nothing more.

It is tempting to say that it is a case of Yatha Raja Tatha Praja (If the king is immoral, so will be the subjects). Perhaps, it is largely true and, unfortunately, India has not had a chance in a long time to see this statement in action positively. The general election in 2014 could give India an opportunity to see whether the ruler can make a difference to the nature of the ruled or if nothing would sway Indians from their death wish for which its rulers and elites have, so far, been willing executioners.