It may not be a cakewalk for the government to borrow Rs6.06 trillion with public sector banks staying away from the bond market

If you walk into the treasury room in any of India’s public sector banks these days, you’ll hear excited bond dealers shrieking over “breaking the support level" of the price of a particular government paper and the excessive volatility—the typical attributes of the stock market. In a little less than a year, the character of the Indian bond market has radically changed. From a buyers’ market, it has become a traders’ market.

The trading volume of the benchmark 10-year paper, the weathercock of market rates, has now dropped to around Rs10,000 crore a day, from an average of Rs30,000-Rs60,000 crore earlier. The overall traded volume in the market is down to Rs15,000-Rs25,000 crore daily, one-fourth of its heydays when the traded volume ranged from Rs50,000 crore to even a trillion. 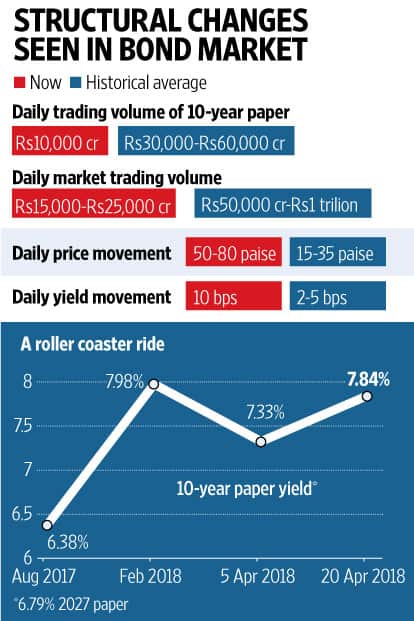 The price movements of bonds illustrate volatility in the market. Normally, the price of a particular government paper moves in the range of 15-35 paise and the yield 2 to 5 basis points, or bps, daily. One bps is a hundredth of a percentage point. Prices and yields of bonds move in opposite directions. Now, the price movement has widened to 50-80 paise a day and the yield movement as much as 10 bps. Finally, the bid-ask spread or the difference between the price at which bond dealers are willing to sell and buy a particular paper is now 3-7 paise against a range of 1-2 paise, prevalent till late last year.

If such volatility is accompanied by ample liquidity, the market becomes a traders’ paradise but excessive volatility without liquidity—which has been the case now—is a nightmare. What has added to the heady cocktails of low volume-high volatility market is short selling by a few banks and primary dealers.

A short sale is a transaction in which a trader sells a bond which it does not own. So, the trader borrows from others to meet its delivery obligations to the Clearing Corp. of India Ltd (CCIL), which runs the bond market, till it buys the bonds and squares off the position. The banks and the primary dealers (PDs) resort to short selling when their view is bearish—that is, the prices of the bond will fall and the yield will rise. They make money if the bond prices drop. In contrast, those who hold long positions make money when the bond prices go up. One can resort to short selling intra-day (meaning covering the position on the same day) but can also keep it open overnight if the view is prices will drop further the next day.

In November 2017, the Reserve Bank of India (RBI) relaxed the norms for short sales after some of the banks got trapped in a “short squeeze" which happens when there is a lack of supply of the bond which the short sellers need to borrow. “In exceptional situations of market stress" (read “short squeeze") the central bank has allowed the short sellers to dip into their own portfolio of bonds to meet the delivery obligation which in normal circumstances they are not allowed to do.

There are many reasons why the government-owned banks have lost their appetite for bonds. One of them is that treasury is not the focus area of these banks at this point when they are busy cleaning up the balance sheets and recovering bad assets. Now, treasury is a routine activity for most banks, meant to maintain the so-called statutory liquidity ratio or SLR obligation, and not to make losses. Under norms, 19.5% of a bank’s net demand and time liability or NDTL, a loose proxy for deposits, needs to be invested in government bonds.

Besides, 11 of the 21 PSBs are now under the so-called prompt corrective action or PCA framework of RBI which restricts their activities. They are required to bring down their risk-weighted assets. Investment in government bonds does not have any credit risk but there is market risk and to pare that, these banks, and even others who are not constrained by PCA, are cutting down their exposure to long-duration bonds.

We can appreciate their risk aversion if we look at the movement of bond yields over the past several months. Between August 2017 (when RBI cut its policy rate to 6% -- the last rate cut) and end-February 2018, the yield on 10-year paper rose by 160 bps, from 6.38% to 7.98%. By 5 April, the last RBI policy which left the rate unchanged but the text of the policy was much less hawkish than what market had expected, the yield dropped 65 bps to 7.33%.

This has been a roller coaster ride and no government-owned bank has the stomach to relish it. Theoretically, the bond yield rises when there is a threat of higher inflation, macro-economic instability or depreciating local currency which can force the central bank to raise interest rates. But, apart from rising oil prices, there has not been anything which could precipitate such a rise. Probably, the threat of government breaching its fiscal deficit target in 2017-18 had contributed to this, added by the finance ministry’s vacillation on whether to borrow extra last year.

Both the government and RBI, its merchant banker, have been trying hard to bring back normalcy to the bond market. Foreign portfolio investors can now buy more Indian government papers with RBI raising the limit to 5.5% in 2018-19 from 5% in two phases. It would also be increased to 6% of the outstanding stock in 2019-20. The limit for state development loans, however, remains unchanged at 2%.

Besides, the government has decided to borrow a lower amount via bonds in the first half of the new fiscal year—Rs2.88 trillion between April-September in 2018-19, compared with Rs3.72 trillion in the corresponding period last year. This is 47.56% of its budgeted gross borrowing for the year against the norm of 60% which is typically done in the first half. Keeping in mind the low risk appetite of banks, the government has also introduced shorter-duration papers maturing between one and four years. Finally, RBI has also allowed banks to spread out booking their mark-to-market or MTM losses in their bond portfolio over next four quarters to protect their balance sheets. MTM is an accounting practice whereby banks are required to value an asset (in this case, their bond portfolio) in accordance with its current market value and not the price at which it was bought. Since the bond prices have been falling (and yields rising), every quarter, the banks need to make good the difference in prices at which the bonds were bought and their current market price.

Can RBI do anything to address the structural changes?

Well, it can always make verbal intervention expressing its discomfort with the volatility in the market.

It can also buy bonds in the secondary market to iron out the excessive volatility —something it traditionally does in the currency market. Finally, RBI can buy back bonds under the so-called open market operations, or OMOs to infuse liquidity and allow banks an exit from illiquid securities. In a liquidity-surplus situation, RBI sucks out money from the system by selling bonds but in a liquidity-deficit situation, it seems to prefer banks borrowing from the term-repo market. Instead, it can buy bonds. Of course, there has to be a justification to do so. Currently, liquidity is not a problem. It may need to do this in the second half of the year, post Diwali when liquidity is expected to dry out.

The government plans borrow Rs12,000 crore every week in the first half of the current fiscal year. The first two auctions sailed through but the third auction last week marginally devolved on primary dealers because of a supply overhang.

There is a sudden rush to sell bonds by banks. There are three buckets in a bank’s bond portfolio—held to maturity (HTM), available for sale (AFS) and held for trading (HFT). Banks are allowed to keep the required SLR holding (19.5%) in HTM, and this portfolio is not subjected to MTM losses while bonds in the AFS and HFT baskets need to be marked to market. RBI allows banks to reshuffle their bond portfolio once a year, typically in the beginning of the year. With the successive drop in the limit in SLR (it was 20% on 31 December 2017), RBI allows banks to shift bonds HTM to other portfolio and even sell them to keep their HTM in sync with SLR requirement. A 4 October RBI note asked banks to do this in April (instead of in the beginning of the year which could mean the April-June quarter in a fiscal year). This partly explains the sudden rush to sell bonds this month and rise in yields. It may not be a cakewalk for the government to borrow Rs6.06 trillion with the PSBs staying away from the bond market, which now rivals stock market in volatility.

Tamal Bandyopadhyay, consulting editor at Mint, is adviser to Bandhan Bank. His latest book, From Lehman to Demonetization: A Decade of Disruptions, Reforms and Misadventures has recently been released

Comments are welcome at bankerstrust@livemint.com