Home >opinion >Populism is not a dirty word

Populism is not a dirty word

For politicians, the price of misleading people is being turned out of office, and this is how democracy works

These are the first such notices issued by the EC. Both parties are alleged to have breached the electoral code, which effectively defines the limits of populism—the parties are required to include in their manifestos the ways and means through which they will deliver on their poll promises, especially pertaining to subsidized/free giveaways.

Colleagues at Mint have compiled a lovely graphic on the so-called populist promises made by the key political contestants in the ongoing assembly elections. Clearly, no-one matches up to Tamil Nadu: from basics such as rice, mobile phones, houses, jobs to even the promise of prohibition is on offer.

Understandably then, in the run-up to the EC action, there have been a raft of editorials and comments making a strong case for discouraging populism. With all due respect to these arguments, I would like to go out on a limb and argue that they are misplaced. This is because they have an implicit binary logic, which we know never plays out in reality; at the least, such promises cannot be uniformly condemned.

To begin with, the EC’s action, while deserving appreciation as far as its intent is concerned, is gross overreach. It is very unlikely to pass muster in a court of law. Very simply, how does the EC ex-ante decide whether a promise in the manifesto and the associated justification provided by the political parties are achievable? Surely, this is up to the abilities of the incoming administration, which has been democratically elected. What does the EC know that the voters don’t; and if it does, then the smarter thing to do is share the information before they vote. Yes, ex-post surely we can say that either the actions bankrupted the state exchequer or they remained a promise as the administration couldn’t generate the means. 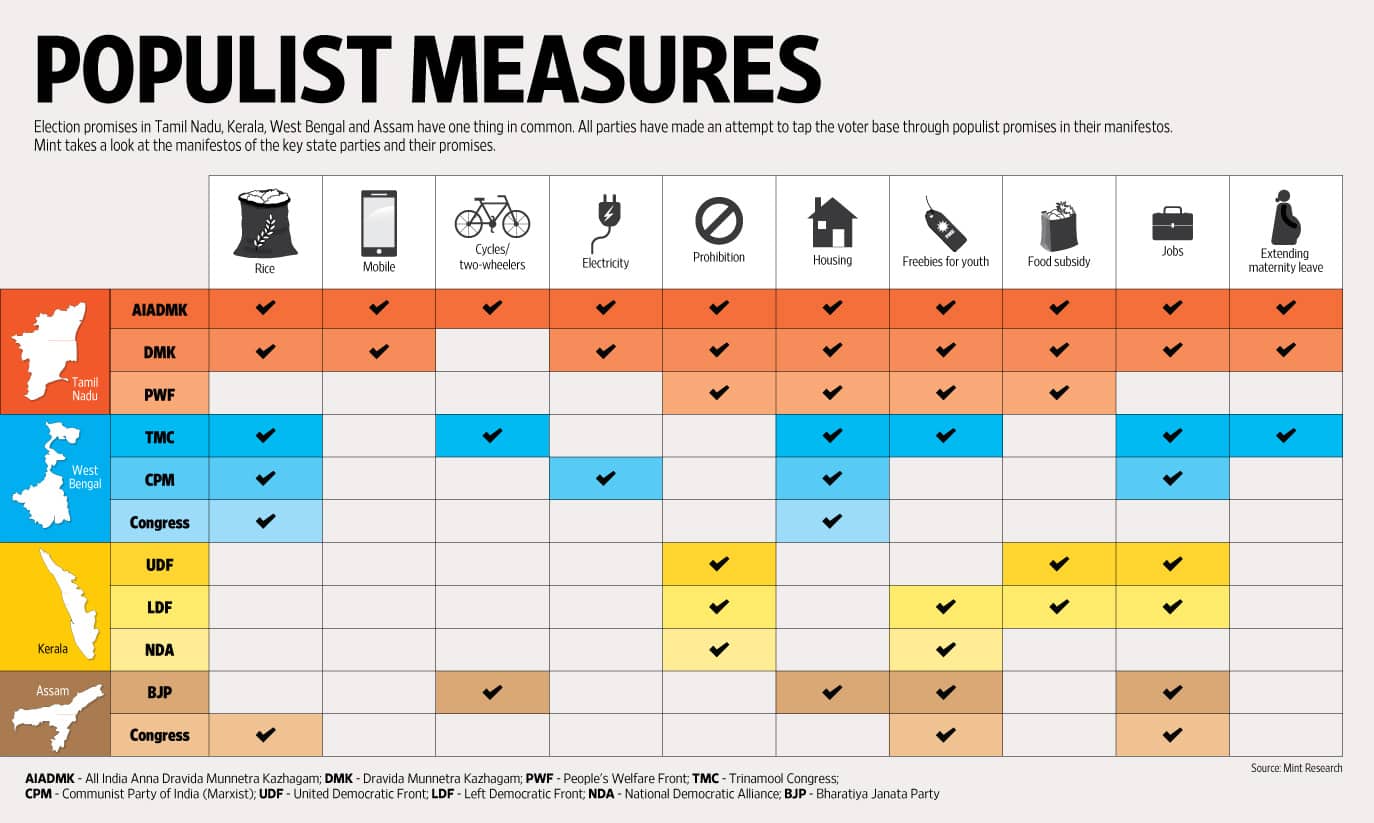 Similarly troubling in these arguments is that implicitly, it suggests populism is a dirty word and the electorate is a gullible lot. The Oxford dictionary defines populism as: The quality of appealing to or being aimed at ordinary people. In a country like India, where the ordinary people grossly outnumber the khaas aadmi (the elites) and the levels of absolute poverty, despite the decline, are staggering, such intentions are totally understandable.

Especially in a country which has been visibly touched by aspirations. Having tasted the tangible fruits of economic growth, particularly through their engagement with the consumer economy, Indian society is being driven by aspirations like never before. Almost all of the items listed in the graphic are aspirational—rice ensures your family a fair meal, mobiles offer you connectivity, jobs are key to delivering on your aspirations and so on.

Now, the implicit assumption that the electorate is gullible (read stupid) is particularly disturbing. Of course they are not. Even if they do vote for a political party (and we know from the rout of the Congress, whose central theme was entitlement, in the 16th general election that this is not necessarily true) on the promise of a freebie, it is a perfectly rational choice.

Not really a comparison, but don’t we rush to grab deals during flash sales? And it’s not just Indians or their developing country ilk who are susceptible. I remember once encountering a nearly kilometre-long queue of people in New York waiting patiently in sweltering heat for their turn of a free cold coffee at a Starbucks outlet. If they weren’t irrational, why assume the Indian electorate is; they are, check out recent elections, able to perfectly discern between chaff and grain.

Yes; populism is to be condemned when the undeserving benefit from such offerings. An apt example would be the Delhi government’s scheme for subsidized power, which includes the well-off in the list of beneficiaries. It is unfair when the rich are beneficiaries, and they will voluntarily never let go—visible in the reluctance of the well-off to comply with the Union government’s request to voluntarily give up on their LPG (cooking gas) subsidy.

The larger question to be answered is, why is it that such basics—like providing three square meals a day and basic healthcare—inevitably proffered at the time of elections are such a challenge seven decades after India gained independence. If the EC is keen to pursue errant politicians, then it should make the effort and compile a list of the promises kept and delivered by politicians. Making publication of such a list mandatory (like affidavits of contestants) will go a long way in deterring habitual offenders.

Alternatively, it is, as the Oxford dictionary defined, perfectly acceptable for a politician to be populist to articulate the interests of the common man. The price of misleading people—it may take long in coming—is being turned out of office. This is how democracy works.

Anil Padmanabhan is executive editor of Mint and writes every week on the intersection of politics and economics. His Twitter handle is @capitalcalculus.

Comments are welcome at capitalcalculus@livemint.com