The shift towards household financial savings, as well as the increase in corporate savings, is good news for future capital formation

The Indian economic model has been a bit of a paradox. India has sometimes resembled the successful economies of East Asia in terms of high domestic savings, close integration with the global economy and macroeconomic stability. And it has sometimes resembled the volatile countries of Latin America in terms of weak domestic savings, macroeconomic instability and growing oligarchic power. This column had earlier argued that rising inequality could mean successive governments would have strong incentives to boost fiscal spending in a bid to buy social peace, taking India closer to the Latin American model.

As part of the national income statistics for fiscal year 2016, the government has recently released detailed data on the trends in domestic savings. A few salient changes over the past five years are worth highlighting. Note that all the numbers in this column are as a percentage of GDP.

Tradable financial assets are growing in importance. The amount of money going into the financial markets shot up in the fiscal year ended March 2016. Ninety per cent of Indian household financial savings continue to be put away in banks, but the share of equities plus mutual funds doubled in fiscal year 2016—from 5.29% to 11.04%. It is quite likely that this trend will continue, thanks to the persistent rise in equity prices as well as the spread of mutual fund systematic investment plans (SIPs). However, an amber light, which has not yet turned red, has been flashing for some time. The financial liabilities of households—aka consumer loans—have also being growing rapidly.

There has been a sharp improvement in corporate savings. It is no secret that large Indian companies are heavily in debt. Many have struggled to service their bank loans. However, the bigger picture offers some hope. Corporate financials seem to be improving if you look at the savings of private non-financial corporations in the national income accounts. One important reason for this is that there are not enough new investment projects to absorb cash flows, but it is still worth remembering that the corporate investment boom in the first decade of this century was similarly preceded by a rise in corporate savings, as companies chose to rebuild their balance sheets. 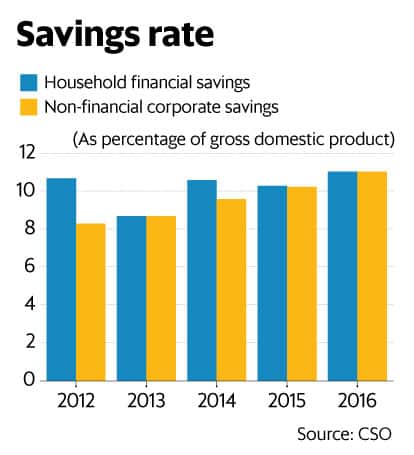 Take a look at the chart. The financial savings of Indian households as a percentage of GDP have more or less been the same over the latest five years for which detailed data is available.

Meanwhile, private non-corporate savings have been increasing. The two were at broadly similar levels by the end of fiscal 2016. The government remains a bystander, since it continues to report negative savings.

India is still in the midst of a slump in business investment, and the gross domestic savings rate is around 4.5 percentage points below its 2008 peak, but the shift towards household financial savings, as well as the increase in corporate savings, is good news for future capital formation.