Does Pakistan have a saviour in Imran Khan?

Does Pakistan have a saviour in Imran Khan?

Imran Khan might be made prime minister of Pakistan by that nation’s powerful military. If this is so, he will be the first Pashtun to lead the country. General Ayub Khan, dictator between 1958 and 1969, is seen as a Pathan but spoke Hindko, not Pakhtu.

Having spent his life in the upper-class Lahore neighbourhood of Zaman Park, Imran actually doesn’t speak much Pakhtu either. But he is seen as an unbending Pathan by his followers. 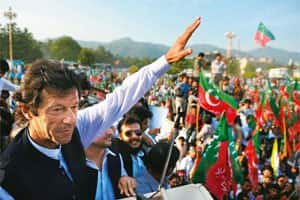 Imran is a Pashtun from the Niazi tribe that is actually quite urban. The Pashtuns don’t have caste and in that sense are different from South Asians. However, other Pashtuns don’t have a high opinion of the Niazis. Another famous Niazi was A.A.K. “Tiger" Niazi, who surrendered 92,000 Pakistani soldiers to Punjab Regiment’s Jagjit Singh Aurora in Dhaka. In Pakistan, the Punjabi is enamoured of the Pathan because he represents the extreme end of honour on the subcontinent.

It is true that the Pashtun has honour (in Zanjeer, Pathan Pran offers one hair of his moustache as collateral to a bania moneylender—who declines, saying the Pathan’s word is sufficient). But because of his rigidity the Pathan has no economy, no culture and is barely literate. This condition represents the Pakistani’s utopia. He seems on course to achieve it presently under Imran.

The man whose votes the army wants to give Imran is Nawaz Sharif. Though Sharif’s fans call him the lion of Punjab, his father was from Kashmir and the family name was Butt. This makes Sharif a Brahmin because Butt is the unfort- unate Punjabi pronunciation of Bhatt.

The word “Sharif" is to show high birth, and Muslims of upper caste call themselves Ashraf, from the same sh-r-f root as Sharif. In his case it is true, as we have seen. Sharif is seen by Pakistani columnists as being not very bright. This may be so, but he is a moderate and relatively sensible leader, attracted to compromise because of his years running his father’s business, an iron foundry.

The “Sharif/Ashraf" claim is repeated in the name of the general who overthrew him, Musharraf. I’m not sure if it’s valid in his case. Many Indian Muslims claim high birth and if we were to tally all of our Syeds and Sheikhs there would be 10 times as many Arabs of noble birth here than in all Arabia.

Pervez Musharraf was not intellectual. He sent his men to die in Kargil without thinking his plan through. Their deaths were in vain, for India’s position was seen with sympathy from then on, and that is a terrible outcome for such sacrifice from jawans. But Musharraf rejected blame and fired Sharif to become dictator. Governance made Musharraf pragmatic. It knocked sense into his head, as they say. Once he saw what a ghastly place Pakistan has become, he ended the jihad in Kashmir, something which India hasn’t given him proper credit for. These days he is a sad figure, as all former dictators are. He is paying Rs12.5 lakh a month to the Washington lobby firm Advantage, initially for an eight-month contract, in the hope that the US will install him again. Prudently, Advantage insisted on taking the first two months’, and the last month’s, fee in advance.

To return to what we discussed earlier, there are quite a few upper-caste converts to Islam in north India. Allama Iqbal was also from a family of Brahmins. The Hurriyat Conference, haters of secularism, is actually full of Brahmins, from families converted in the last few centuries. One of them is Abdul Gani Bhat, whom reporters love for his colourful quotes, but he’s unhinged.

The most prominent Brahmin of Pakistan was its most charismatic leader. The name Bhutto is also derived from Bhat, and Zulfiqar Ali Bhutto’s father was of Brahmin stock. More about him later. Zulfiqar Ali Bhutto was messianic and unstable. He was cold enough to have the police brutalize his cleverest follower, old J.A. Rahim. And he was sensitive enough to weep at the sight of labourers breaking boulders with their hands. We know this from the memoirs of his leftist finance minister Mubashir Hasan (The Mirage of Power: An Inquiry into the Bhutto Years, 1971-77). Hasan spends hundreds of pages detailing legislation and process and gossip, but omits to tell us he sat in a cabinet that apostatized the Ahmedis. There’s no mention of this constitutional amendment at all. Hasan is afraid of being killed by his countrymen, true, but then why keep pretending to be a liberal?

In his memoirs (Working with Zia: Pakistan’s Power Politics 1977-1988), General K.M. Arif wrote about how Bhutto spent his last hour in jail before being hanged. He lost his bearings, and started sweeping the floor. Then he demanded hot water for a shave (“I don’t want to die looking like a bearded mullah") and then began weeping, too distracted, he admitted, to be able to write his will. The man who hanged Bhutto, Zia-ul-Haq, was from the non-martial caste of Arain peasants of Jalandhar. He was more wily than his warrior generals, and gave Pakistanis what they wanted: full-dress Sharia with all the flogging of drunks, amputation of thieves, beheading of murderers and stoning of adulteresses that Islam promises its faithful.

He is a hero, and trucks across Pakistan still bear his likeness and that of Ayub. Many Pakistanis yearn for these punishments, which remain on the books, though not carried out by a frightened judiciary. In that sense the Taliban are only demanding implementation of Pakistan’s constitution. Bhutto was born to Junagadh’s prime minister Sir Shahnawaz Bhutto from his second wife, a Hindu of the scheduled castes. The petty Muslim aristocracy never let him forget that, and it is why Bhutto hated Hindus so much.

There’s an excellent story in Sherbaz Khan Mazari’s memoirs (A Journey to Disillusionment) about Nawab Khair Bakhsh Marri sitting on a chair and repeatedly turning his face away from Bhutto when, as president of Pakistan, Bhutto tried to speak to him to offer him the job of chief minister of Balochistan. As a “higher" noble, Marri could not accept a job from a lower one.

In the memoirs of one of his chamchas Rafi Raza (Zulfikar Ali Bhutto and Pakistan 1967-1977), there is a photograph that is quite revealing. Bhutto and his gang are dressed in dark Nehru jackets, but with flashy, braided epaulettes, Bhutto’s being flashiest of all. It is a head waiter’s costume, but they probably thought they appeared grand in a martial culture that loves uniforms. Another thing I found strange about Bhutto was a line in Benazir’s memoirs (Daughter of the East). She writes after his death of going through his wardrobe and smelling his favourite perfume, Shalimar.

Made by Guerlain, it is actually a scent for women.

Benazir Bhutto was the best leader Pakistan ever had, including Muhammad Ali Jinnah. She had matured in exile under Musharraf and would have tried to free Pakistan from the embrace of Al Qaeda.

Al Qaeda struck first and with her went Pakistan’s last chance. I’m not sure what the provenance of Asif Ali Zardari’s name is. Like Bhutto, he is a Sindhi-speaking Baloch feudal, though a Shia, like Jinnah. Baloch are tribals, but different from the Pashtuns in a vital sense. The Baloch surrenders to his tribal chief and is not independent and individualistic, like the Pashtun is.

Under 1% of the Pakistan army is made of Baloch, and they are known to be deserters, running back to the village. That does not mean they are cowards.

When Baloch leader Nawab Akbar Bugti rebelled, his followers fell with him in a missile strike ordered by Musharraf. This killing triggered yet another round of Balochi militancy, and has kept the army busy there because of a dictator’s mindlessness.

Pakistan’s founding ideology is hatred. Jinnah had no real understanding of India, of Muslims or of caste. He rejected democracy’s majoritarian principle with- out realizing what he was setting about.

States founded on such unstable principles always yearn for saviours. Pakistan’s latest is Imran, and like the others he will fail.