Home >Opinion >Online-views >A bully in the China shop?

A bully in the China shop?

A bully in the China shop?

So Barack Obama has decided to talk tough about China. “Enough’s enough," he said at a news conference of the Asia-Pacific Economic Cooperation summit at Honolulu on Sunday. “We’re going to continue to be firm that China operate by the same rules as everyone else. We don’t want them taking advantage of the US." He said that China, which often presents itself as a developing country, is now “grown up" and should act that way in global economic affairs. It should stop “gaming" the international system and create a level playing field for the US and other foreign businesses. The deliberately undervalued yuan, he asserted, gives Chinese products a 20-25% price advantage in global markets.

That’s a long way from the low courteous bow Obama had greeted Chinese President Hu Jintao with when they met for the first time, nearly three years ago. 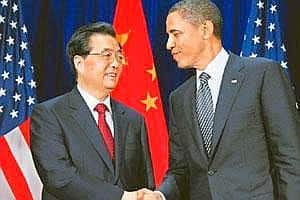 But how serious was Obama when he bared his fangs? How much of it was just American politics, as the Chinese media dubbed it? Obama faces re-election in November next year, and it’s hardly going to be a cakewalk—the economy still teeters, and the contest between the Republicans running for the presidential nomination seems to be more about what a sissy Obama is than about anything else. And what Obama said to US Inc just a day before his China snarl doesn’t help his tough-guy case much.

According to The New York Times, in a meeting with US CEOs, Obama encouraged them to invest in China, telling them that “we should be rooting for China to grow". The logic: the millions of Chinese to whom US companies had outsourced their work “are potential customers for us in the future". The CEOs, including those of Google, Johnson and Johnson and Eli Lily, later met Hu Jintao, who told them that China’s goal was to move up the economic food chain “from ‘Made in China’ to ‘Created by China’".

In his public statements, Hu Jintao spoke the language that Chinese statesmen are so skilful at, with allegory hinting at ancient wisdom bathed in confounding confucianism. “We especially need the world to cross the river in the same boat, and respond hand-in-hand with a spirit of cooperation and mutual benefit," he said. Beat that, Obama, for placebo semantics.

Anyway, the US can do little to pressure China (other than growl belligerently). Beijing is America’s biggest foreign creditor and third largest export market. The US can hardly resort to punitive sanctions, because it is in no position to handle a Chinese retaliation—and the trouble is, the Americans can’t even predict how those inscrutable and superiority-complexed people would retaliate. If the US uses bodies like the World Trade Organization to attack what it—and most of the world—sees as unfair trading practices, such as Chinese government subsidies to state-owned enterprises, it’ll be a tedious long haul.

In the meantime, China points out that its current account surplus fell 43.5% from a year earlier to $57.8 billion in the last quarter. As a percentage of gross domestic product, the surplus in the last three quarters fell to 3% from 5.1% in the same period in 2010. So, the Chinese are asking, why are you griping about the yuan—isn’t it basically at fair value? In fact, at the G-20 summit last November, the US argued strongly for 4% as a benchmark to judge whether countries’ currencies were undervalued. No agreement was reached on this (a principal reason being China’s vociferous opposition), but today China can throw its 3% figure back at the US’ face and preen.

Of course, the surplus will go well beyond 4% once the global economy recovers, but for now, it’s China that is smiling. Even as it sucked in $95 billion in foreign direct investment (FDI) in the first 10 months of this year, up 15.9% from the same period last year—at this rate, 2011 will break earlier records for FDI inflows.

While there’s just a year left before Obama goes for re-election to an electorate that’s bruised and confused, he has to be John Wayne, but with six-shooters that are unloaded.