The rub in the education Act

The rub in the education Act

Creating a new fundamental right is a moment of glory for a nation: a moment that savours the fact that we can afford to make a promise to each one of our citizens. Yet it should also naturally be a moment of pure fear, for we have made a commitment to something big, something we have never done before, something we have no idea of how to do. And that is exactly where we are at with the new Right to Education (RTE) Act, 2009. 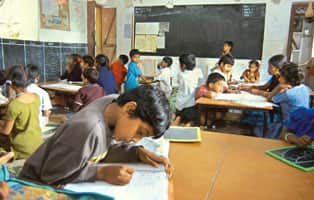 The myriad questions arising from the Act will form the backbone of the education system we create for the next few generations. And it raises more questions than it answers. While promising to provide free and compulsory education, it says very little about where the funds will come from. The division of financial responsibility is between the states and the Centre, as education is ruled by both. But clearly, as Mayawati’s rejection of the financial burden of implementing the Act in Uttar Pradesh has shown, this has yet to be negotiated. Even at the level of schools, the question of funding the new entrants has to be resolved. While 25% of new admissions at entry level in private schools are now reserved for economically weaker sections (EWS), which will ostensibly be paid for by the government, there has been no discussion on how much will be paid per student, or what that will include.

There are issues that will inevitably arise from such a progressive move, such as the coexistence of the children of the elite and those of EWS in the same classroom. Some schools have models that have existed for a while with varying degrees of success. Some have extra classes for the disadvantaged students during holidays, while others report that such success flounders in middle school. The social divide is vast and often traumatic for the students on reservation. But this is their struggle to advancement, and while we can support them, we cannot fight their battles for them. The Act tries to anticipate this by adjuring schools to provide “freedom from fear, trauma and anxiety".

Certain decisions have been handed down to all schools, such as the prohibition on holding back and expulsion. This has serious implications for discipline, motivation and achievement orientation of the pupils. While I can see the reasons behind this clause—without it RTE would have a gaping loophole—the drawbacks are worrisome, especially in private schools. This is the path to mediocrity, as has been proven in many countries before us. This Act creates a system with no incentive for students to try to improve themselves, or to behave with a modicum of restraint. It compromises their ability to withstand pressure, to try harder, to move up any hierarchical ladder. In one fell swoop, this Act creates a generation of drifters, of those who believe themselves to be entitled to a promotion.

And what happens to these very same people when they turn 14? While there will be some notable successes, there will be millions who would have simply passed through the system without gaining much. The Act merely says that they must acquire elementary education. Yet there are no clear measures of success indicated, nor a range of success defined. They have all been promised a certificate, but will that be of any value if every 14-year-old has it? Will it indicate anything about aptitude? Is there a plan for the future progression of the child? Is there, indeed, a path for each child to follow?

These issues will arise irrespective of the success or failure of the RTE Act. The truth, of course, is that we do not have the teaching infrastructure to deliver on the promise. The Act is a necessary step in building this infrastructure, but the sheer scale is mind-boggling. The entire structure depends on dedicated and caring teachers. This is now our bottleneck, for which no radical solution has been provided. Mere teacher training in the old mould is not going to achieve the broad sweep of reform that the Act envisages.

Herein lies the rub—the Act seems to be a wonderful piece of legislation that somehow does not connect with the parts that must come before it, after it and those that must support it. There is a lack of transparency about the national strategy for education, which may, for all we know, exist within the grand ministerial files. Yet it has been left to the common masses to second guess the strategy, and, therefore, the guiding principles of educating and employing the young. Government strategy needs to be more transparent in order to guide private investment and effort.

Meeta Sengupta is an independent consultant in education strategy. Comments are welcome at theirview@livemint.com