Funds raised in a year by firms in 5 highly leverage sectors have shot up to Rs1.94 trillion in fiscal year 2015

Mumbai: Companies in five highly leveraged sectors of the economy have used growing private placements to gorge on even more debt, even as banks have begun to shut the door on them.

The funds raised in a year by power, real estate, metals and mining, roads and highways, and engineering companies have shot up from ₹ 81,846 crore in fiscal year 2006 to ₹ 1.94 trillion in fiscal year 2015. The past 10 fiscal years have seen these sectors increase their share of the overall private placements market from 5.45% to 17.65%. 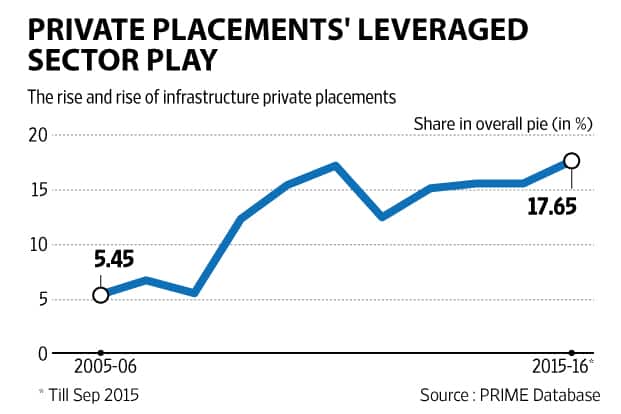 Why have investors taken the bait? The answer is a simple one. Companies in the five over-leveraged sectors offer higher yields to raise money.

Pranav Haldea, managing director of the PRIME Database group, said that banks are reluctant lenders to these sectors. While they continued to increase exposure to these leveraged sectors, this has not kept pace with the companies’ need for capital, forcing the latter to seek other avenues of funding. Bank exposure has grown at a slower pace than borrowings from the private placement segment. Companies also come to the private placements market because of lower issue costs and disclosure requirements. The disclosure requirements are low because a private placement, by definition, is an issue of securities to a limited number of sophisticated investors, which also means that the regulator operates with a lighter touch. Investors include mutual funds, non-banking financial companies, corporates, banks, foreign portfolio investors and high net-worth individuals.

Curiously, the ability of these companies to meet their obligations has been on the decline, even as the proportion of private investors willing to lap up such offerings has been on the rise. The median interest coverage ratio is at or near a 10-year low for all the sectors, if one looks at equivalent companies in the BSE 500 index. The ratio measures their ability to pay interest on their debt. They account for 49.74% of the total debt of BSE 500 companies, excluding banks and financials. The attraction for sophisticated fixed income investors is obvious. Investors who would otherwise get around 8% on their investments get around 10% if they invest in companies that raise debt through private placements. And this can go to even higher levels if the company is considered especially risky.

Many investors have also increased allocations to the five over-leveraged sectors because they were betting on a turnaround in fortunes, as the Indian economy recovers.

The private placement upsurge has come even as banks declined in importance as a source of funding. Domestic bank credit dropped from accounting for 56% to 45% of the total commercial sector funding between fiscal year 2011 and fiscal year 2015, according to a report by HSBC Securities and Capital Markets (India). Domestic bank credit growth came down from an average 24% in 2004-08 to 9% now, the report said.

“…even as bank credit is sluggish, other sources of funding have picked up to fill the gap somewhat," according to the 10 September report authored by chief economist Pranjul Bhandari, economist Prithviraj Srinivas and economics associate Stuti Saksena.

Corporate bonds and commercial papers rose from accounting for 6% of the total commercial sector funding to 14% in the period mentioned above, according to HSBC. Expand
Subscribe to Mint Newsletters
* Enter a valid email
* Thank you for subscribing to our newsletter.
Topics
mint-india-wire plain-facts
Close
Recommended For You
Feedback
Select your Category
Your Message
No Network
Server Issue
Internet Not Available