The gender divide in India’s workforce

The latest economic census results have once again thrown the spotlight on the wide gap between employment of men and women in the country. Only a quarter of workers employed in India are women, according to the census. The figure is lower for urban India at 19%.

While the economic participation of women is considerably lower than men in all states, there is wide inter-state variation across India. The results of the economic census show that states in the South and East, which boast above average sex ratios and above average female literacy rates, have a greater proportion of women workers compared to the national average. 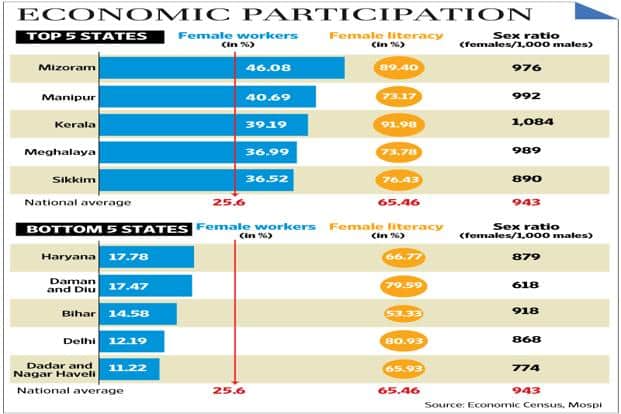 Economists and sociologists have long argued that women in the South and the East enjoy better survival chances and life prospects because they have historically enjoyed better economic opportunities. The chances of a girl child surviving are higher because a woman is valued economically in these parts of the country.

Urbanization and years of rapid growth have failed to bridge the stark regional divide in women’s work participation rates so far. Large swathes of India appear to be trapped in a vicious cycle today: women hesitate, or are forbidden, to join the workforce because of existing social mores, and the lack of enough women workers tends to reinforce those mores.