Elephants are reputed for their long memory. Yet finance minister Pranab Mukherjee, who fancies this metaphor of an elephant (as used by a leading newspaper), seems plagued by an inexplicable amnesia.

Not many summers ago, the Bharatiya Janata Party had to bite the dust for its “India Shining" campaign which, as voters later told it, was at complete variance with ground realities. And if the Union Budget is reflective of the government’s “vision and signal the policies to come", as Mukherjee proclaimed, then the United Progressive Alliance (UPA) is in more trouble than it can imagine. 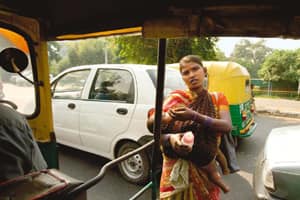 200If the vision of the Budget is indeed the vision of UPA II, there is only one word to describe it: triumphalism. This, as the media likes to say, is a Budget for a nation that “has arrived". Make no mistake: India has arrived. Just not in the way the middle class would like to think.

India has arrived at 134rd place in United Nations Development Programme’s 2009 Human Development Index, just ahead of Solomon Islands and behind Bhutan and Laos. It has arrived at the 65th place (among 88), five places behind Cambodia, in the Global Hunger Index. If India has arrived in the club of economic superpowers, it is the first one to have done so with 46% of its children malnourished— that’s twice the child malnutrition rate of sub-Saharan Africa.

The UPA vision that brought it to power in 2004 and back in 2009 was that of the aam aadmi. So let’s try to spot where the aam aadmi stands in Mukherjee’s Budget.

If the aam aadmi is the little girl, pricking your conscience, soliciting alms at the traffic light or the homeless woman who froze to death on the pavement in Delhi’s cold winter, there is little to cheer for them in the Budget. Not a single penny for the ministry of urban poverty alleviation for shelters for the urban homeless or for residential schools for street children. Forget the Supreme Court activism on shelters for the homeless or the fact that a Right to Education Act now makes education not only free, but also compulsory. A marginal increase in the share of expenditure on education as a percentage of the gross domestic product, from 3.23% to 3.88%, is all. Hardly enough if we hope to overtake Bangladesh’s literacy figures that have surged ahead of ours in the last 25 years.

If the aam aadmi happens to be a Dalit or a tribal, there is even less to cheer. The allocations in the scheduled caste sub-plan and the tribal sub-plan should be proportionate to their population—at 16% and 8% respectively. But the Budget allocates 7.19% for the SCs and 4.30% for the STs. The National Campaign on Dalit Human Rights estimates a shortfall of around Rs25,000 crore in the current Budget.

If the aam aadmi is a woman, then, on the face of it, there is something to cheer about. Allocations for women, according to the gender budgeting statement, is up from 5.5% to 6.1% of total expenditure. But lest she celebrate too soon, the Centre for Budget and Governance Accountability is quick to point out that this works to exactly Rs1,200 per woman per annum—not a substantial sum by any standard.

If the aam aadmi is one of the 80 million malnourished children below the age of six, the nearly Rs2,000 crore increase in the allocation for the Integrated Child Development Services is still way below the Plan allocation—what has been laid out in Five Year Plans—for the programme.

If the aam aadmi is the farmer, then despite the rhetoric to usher in a second Green Revolution, an allocation of Rs400 crore for six major states is not just sub-critical, but a sovereign guarantee that this promised revolution will never fructify.

If the aam aadmi is none of the above, then surely it must be the majority of the population that has been suffering the crippling impact of food inflation, which, at 18%, is the highest that the country has seen in three decades. Mukherjee actually managed to knock off nearly Rs500 crore from the food subsidy this year and reduce the overall level of subsidies in the food and nutrition sector from 12.83% to 10.48% of total expenditure.

So who really is the aam aadmi in the Budget? The toss-up is between the taxpayer who gets a break of Rs26,000 crore and the corporate sector which gets a break of close to Rs80,000 crore. The finance minister was quick to point out that the social sector allocation in the Plan expenditure in the Budget was 37% and stood at an impressive sounding Rs375,000 crore. What he forgot to mention was that perhaps another way of looking at this figure is to compare it with the Rs500,000 crore of revenue forgone. Since the taxpayer will pay back a substantial part of the Rs26,000 crore through increased prices of goods due to the fuel price hike and the inflationary pressures that this Budget will certainly generate, it is the corporate sector that emerges as the clear winner in this “Spot the aam aadmi" contest.

Elephants occasionally meander out of their path; environmentalists’ response to this is to create dedicated elephant corridors between their habitats. Perhaps the rumoured-to-be-soon-to-be-constituted National Advisory Committee of Sonia Gandhi will create the corridor that brings this meandering elephant back to the aam aadmi track.

Biraj Patnaik is principal adviser to the Supreme Court Commissioners on the right to food. The views expressed here are his own. Comment at theirview@livemint.com