The reliability of the public distribution system (PDS) has improved greatly in a number of states that have a reputation for endemic corruption. In states such as Bihar, Chhattisgarh and Odisha, where leakages were as high as 50-90% in 2004-05, they are now of the order of 10-25%. This pattern, based on National Sample Survey (NSS) data, is corroborated by other sources, including the India Human Development Survey (IHDS) and field studies.

How have PDS leakages come down in these states? Greater political will, often linked to electoral politics, led to constructive reforms. Wider PDS coverage, lower prices and clear entitlements meant that many people began demanding their due. Computerization of the system made it harder for intermediaries to divert PDS grain; higher commissions enabled dealers to run a ration shop without cheating; in some states, handing over ration shops to gram panchayats and co-operatives further helped to check corrupt dealers.

At the all-India level, too, PDS leakages have declined (from 52% to 42% between 2004-05 and 2011-12, according to NSS data), but they remain unacceptably high. There is a puzzle here: if there is a drastic reduction in PDS leakages in so many tailender states (Bihar, Chhattisgarh, Odisha), then why does the all-India leakage estimate remain so high?

The first clue emerged from a 2011 survey of below-poverty line (BPL) households in nine states. We found that even in states such as Rajasthan and Uttar Pradesh, there was little cheating of households with a BPL or Antyodaya ration card. On average, they were getting more than 80% of their entitlements. Around the same time, however, NSS-based estimates of PDS leakages (for all types of ration cards) remained high in both states—around 60% and 55%, respectively. This contrast suggested that leakages were heavily concentrated in the above-poverty line (APL) quota, and possibly also in the so-called special ad hoc allocations. These quotas have grown by leaps and bounds in the 2000s (see chart). The share of the APL quota in total PDS offtake rose from barely 10% in 2000 to 30% or so in 2012. 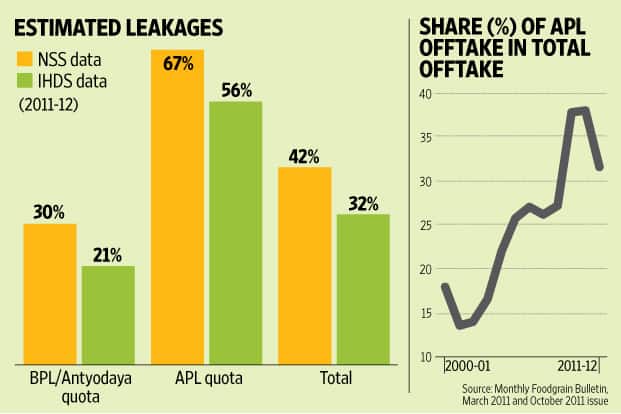 State governments were unwilling to lift their APL grain in the early 2000s, because central issue prices under the APL quota were not very different from market prices. It made no sense for state governments to lift expensive grain from the FCI, nor did it make sense for APL cardholders to buy PDS grain at APL prices. Over time, however, the situation changed as market prices of wheat and rice rose from around ₹ 8-10 per kg to more than ₹ 12-20 per kg, even as central issue prices remained unchanged. State governments began lifting APL grain—in states with a well-functioning PDS (such as Tamil Nadu, Andhra Pradesh, Chhattisgarh, Odisha), state governments used APL grain to run a universal or expanded PDS. In many states, however, the APL quota was turned into a cash cow as APL grain was lifted in large quantities and sold in the open market. APL cardholders would have been quite happy to purchase grain even at APL prices, since market prices were higher still. However, they were kept in the dark to the extent that in some areas they started thinking of their ration card as a mitti ke tel ka card (a kerosene card), which entitles them only to kerosene.

Using the 68th round of the NSS, it is possible to estimate not only overall PDS leakages, but also leakages under different quotas. Matching PDS purchases by BPL and Antyodaya cardholders with official offtake figures under those two quotas, we find that the leakage is around 30% at the all-India level. Similarly, matching PDS purchases by other households (roughly corresponding to the APL category) with offtake under the APL quota, the leakage is 67%. Using the same method with IHDS instead of NSS data, the results are similar: 56% leakage in the APL quota and 20% in the BPL and Antyodaya quotas combined. The figures are indicative, because some states now have special categories of ration cards that do not fit neatly into the APL-BPL-Antyodaya classification, but the basic pattern is clear enough.

With the implementation of the National Food Security Act (NFSA), the APL quota will be phased out. Since the NFSA extends PDS coverage to about two-thirds of the total population, many households who currently possess an APL card are likely to be covered by the NFSA as priority households. By bringing the bulk of the population under a common system of clear entitlements, NFSA could greatly strengthen public pressure for a well-functioning PDS.

This voice effect has already worked in many states—most recently in Bihar. As the NFSA came into force in Bihar, the coverage of the PDS went up to more than 80%. A recent survey of 1,000 households in four districts found that households with a new ration card had been able to secure about 80% of their entitlements during the month preceding the survey. That still leaves a substantial gap, but for Bihar, where the PDS was virtually useless just a few years ago, it is a real breakthrough. Other states would do well to take a leaf from this experience and put an end to the APL scam.

Jean Drèze is visiting professor at the department of economics, Ranchi University.Reetika Khera is associate professor at IIT Delhi.