Home / Opinion / Old questions, new answers: The changing narrative of the great recession
Back
Share Via

On 15 September 2008, Lehman Brothers Holdings Inc., arguably the biggest victim of the US subprime-mortgage crisis, filed for bankruptcy. This seminal event greatly intensified the ongoing economic crisis in the US and led to the erosion of a record $10 trillion in market capitalization from the global equity markets. With its ninth anniversary round the corner, a new working paper at National Bureau of Economic Research (NBER), a leading economic research organization based in the US, along with independent research work by scholars at Massachusetts Institute of Technology, is giving rise to a competing theory that has challenged the broadly concordant reasons for the Great Recession.

“Like I said, don’t get emotional about real estate, Nash. They’re boxes. You listening? Big boxes, small boxes." (From a scene in the 2014 Hollywood movie, 99 Homes).

Rick Carver, the devilish real estate operator played brilliantly by Michael Shannon, thunders these lines to his victim-cum-employee Dennis Nash. The movie is a crisp 112-minute description of what the mortgage crisis meant to people across the income spectrum. Turns out, the movie was prescient in its observations and is inspiring research that is challenging the established consensus on what drove the Great Recession.

The widely-accepted consensus of what fuelled credit growth in the run-up to the Great Recession (2007-09) has been largely consistent and has centered on the findings of Atif Mian of Princeton University and Amir Sufi of Chicago Booth School of Business. Over a series of research works, they have found that most of the growth in credit during the early 2000s boom was fuelled by subprime borrowing despite no noticeable income increase and was the primary trigger of the 2007 to 2009 economic recession. While illiquidity of banks, the fall of titans like the Lehman Brothers, and an uncertain public machinery may have had contributed to the downturn, the evidence as shown by Mian and Sufi and other notable works in this space suggest the economic slowdown was an outcome of the highly leveraged household sector unable to keep up with its debt obligations. The workings of this debt-fuelled-recession channel, also known as the “credit supply view" in economic parlance, can be summed up this way: from 2002 to 2005, there was a steady expansion in the supply of mortgage credit for home purchases towards households which were previously unable to obtain a mortgage due to poor credit histories. The mortgage credit supply expansion led to a rise in house prices and further pushed the existing homeowners to aggressively borrow against the rise in home equity values through cash-out refinancing and home equity loans.

This explains markedly the substantial increase in the household debt to GDP ratio from 87.5% in Q1 of 2005 to 99.2% in Q1 of 2008. Much of this borrowing belonged to the households of the bottom 80% of the credit score distribution. Only borrowers at the top of the credit score distribution or those with the best credit histories were unresponsive. And then much of the sharp rise in delinquencies and defaults was driven by the lower credit score individuals living in areas where the house price boom and bust was more severe. All this sounds familiar, right? But here is the twist. A new working paper, Credit Growth and the Financial Crisis: A New Narrative, at the National Bureau of Economic Research (NBER), authored by Stefania Albanesi (University of Pittsburgh), Giacomo De Giorgi (Federal Reserve Bank of New York) and Jaromir Nosal (Boston College) along with the works of scholars like Antoinette Schoar (MIT Sloan School of Management), have come up with evidence challenging the established reasons for the Great Recession. These researchers point out to two key shortcomings of the earlier research works authored by Mian and Sufi.

Firstly, the earlier approach concludes that the default crisis was mainly driven by low credit score borrowers or subprime borrowers. In contrast, Albanesi, De Giorgi, and Nosal argue that low credit score individuals tend to be disproportionately young, and thus, the earlier approach is unable to distinguish as to whether the increase in supply of credit to such borrowers was on account of the borrowers being subprime, or if it was just on account of the fact that younger people tend to demand more credit in their life cycle. 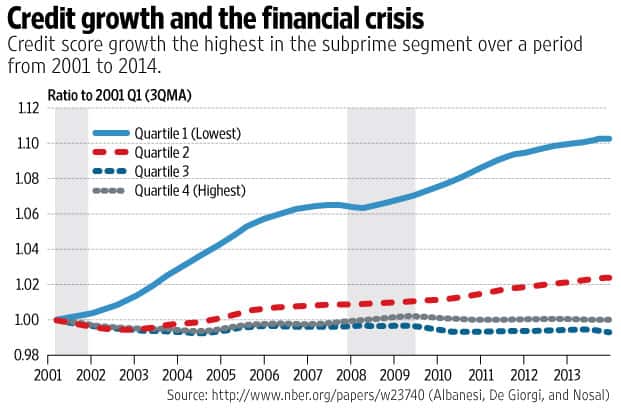 In order to deal with these crucial issues, they use an individual’s credit score from two years back, in line with industry practices. They also control for the fact that younger people tend to be disproportionately higher in lower credit score quartile. After accounting for these two factors, the researchers find that credit growth in the years preceding the financial meltdown was concentrated with borrowers in the middle and top of the credit score distribution. This has also been corroborated by research work of Antoinette Schoar (MIT), who finds that middle-class borrowers with good credit scores were the main drivers of the housing default crisis.

Delinquency share for investors is about 10% across all quartiles until mid-2006. At the onset of the crisis, there is a sharp rise of the investor share of delinquencies, and especially foreclosures, for borrowers in quartiles 2-4 of the credit score distribution. The trend is more dramatic for foreclosures Moreover, Mian and Sufi had conducted a spatial analysis in the US and showed how localities with the highest proportion of subprime borrowers were the ones that drove credit growth and default rates. Albanesi, De Giorgi, and Nosal find the same results for such localities in their analysis. However, within these subprime localities, their finding is: the borrowers with good credit scores were the ones that actually drove credit growth and defaults. Much of the concurrent research is now citing Albanesi, De Giorgi, and Nosal’s work (NBER) and is arguing on similar lines, challenging the established consensus that has prevailed till now regarding the Great Recession.

At this point, researchers are actively reassessing the role of growth in the supply of subprime credit in the 2001-2006 housing boom and in the 2007-2009 financial crisis. These new findings should inform policy discussions among stakeholders across the aisle. Moreover, it makes it even more important for banks to be prudent with their lending. A rigorous evaluation of both subprime and prime borrowers is a key takeaway of the emerging research.

India’s retail housing market doesn’t possess any systemic risks as per the RBI Financial Stability Report in June 2017. India’s property market sales are expected to grow at a 14% compound annual rate from 2016-20 and 18% from 2020-25, according to Morgan Stanley’s research, which is comparable to China’s 22% compound annual growth rate from 2004-15. Interestingly, according to media reports, about one-third of new home loans (in terms of units) in India’s roughly Rs10,000 crore mortgage market have started originating from the low-cost housing segment. The government has started several schemes to meet the housing shortage of 18.7 million across 681 cities. The efforts include the redevelopment of slums, the creation of low-cost housing via public-private partnerships, subsidies for the low-income groups, and a credit-linked subsidy programme for home loans. Financial institutions sense an opportunity as mortgage delinquency rates are at less than 1.5%.

But as Robert Shiller (professor of economics at Yale) puts it, “Speculative bubbles do not end like a short story, novel or play. There is no final denouement that brings all the strands of a narrative into an impressive final conclusion. In the real world, we never know when the story is over."

Therefore, prudence on the part of bankers, regulators, and all other stakeholders is strongly advisable.

The debate on the causes of the 2007-2009 financial crisis is far from over and our search for the right answers seems like a long but necessary journey.